Continuing on from the Tseung Kwan O Line mentioned in the previous post, the Kwun Tong Line is a bit more interesting – the full set of photos is here, along with a track diagram of the line.

At Tiu Keng Leng trains for the Kwun Tong Line emerge from turnback sidings beyond the platform, then have a cross platform interchange with the Tseung Kwan O Line: 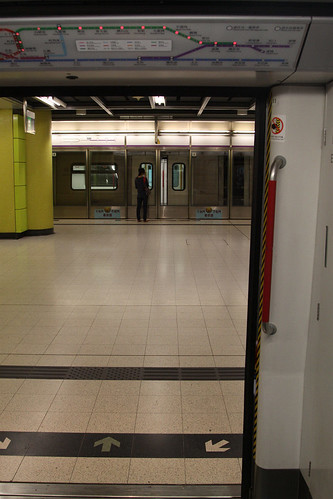 There is the second cross platform interchange at Yau Tong, the uninteresting station of Lam Tin, then the railway emerges from tunnel onto a viaduct: 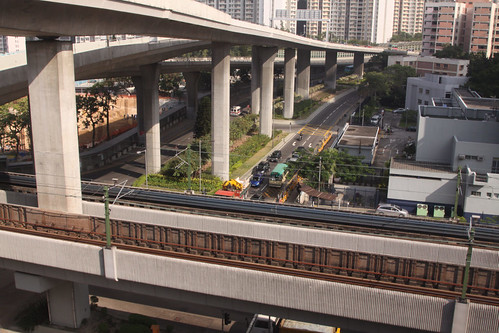 Unfortunately for photography there doesn’t seem to be any good vantage points in this section: the above photo was taken out from the window of a bus travelling along the parallel freeway.

The first station on the viaduct is Kwun Tong: 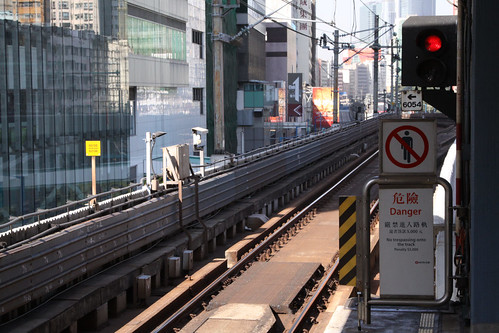 The top level is the platforms, below is the concourse, then a roundabout, and a underground road tunnel. 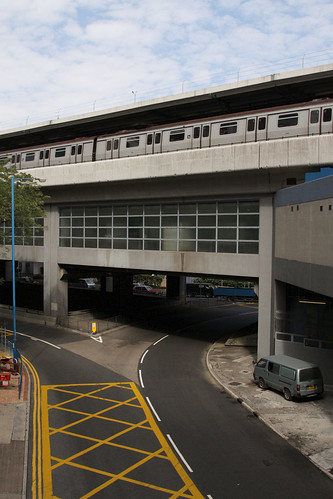 Across the road from the station is a multistorey carpark, which make a good vantage point no matter what country you are in: 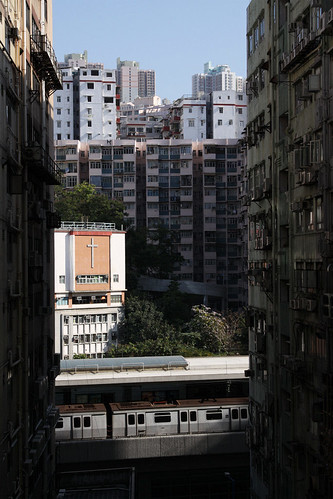 The next station are Ngau Tau Kok and Kowloon Bay, which have the same design due to being located on the same viaduct. 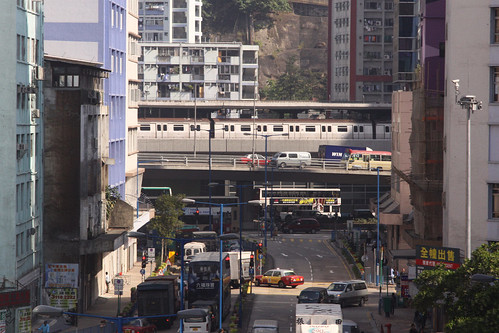 These three stations do not have platform screen doors, but installation of automatic platform gates was underway when I visited. 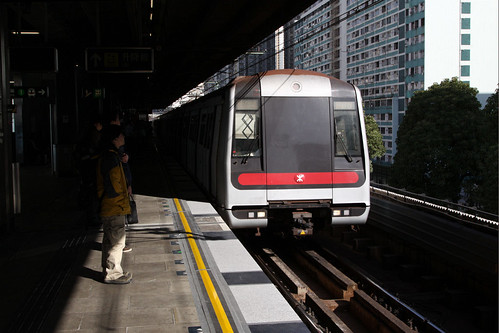 Continuing onto Kowloon Bay, you can see the adjacent Kowloon Bay depot: 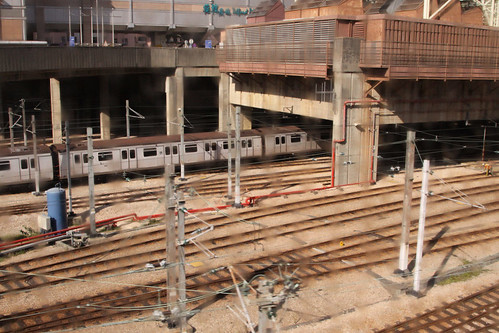 When I was there a number of small diesel and battery-electric shunters were moving maintenance wagons around the depot. 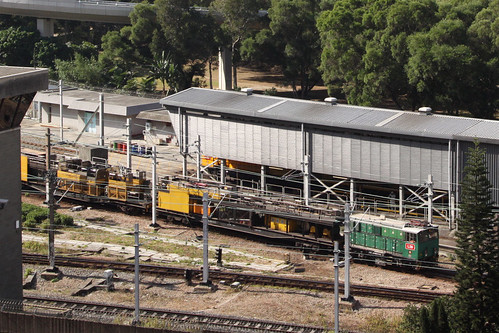 Kowloon Bay is also the home of the MTR headquarters. 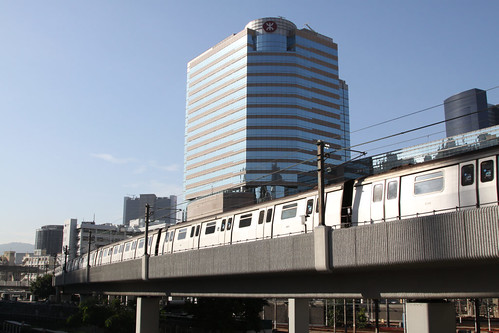 After the station at Kowloon Bay the line heads back underground: 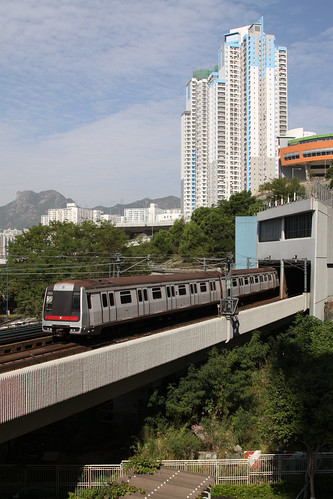 If you leave the station there are a number of vantage points looking over the line, depending on the position of the sun. 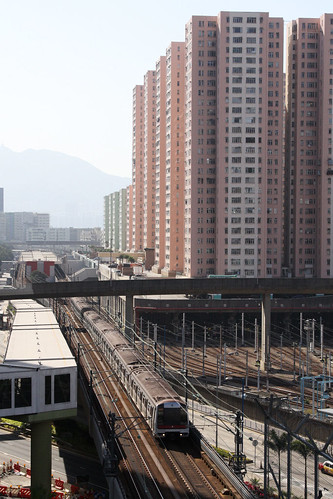 The first station in the tunnel is Choi Hung. It has an unusual track layout, with three tracks served by four platforms. I saw one train actually use the centre platform, it only opened the doors on one side – each island platform is dedicated to trains in a given direction. The platform also provides access to the Kowloon Bay depot, with the entire section being designed for future expansion, as explained here (via Google Translate). 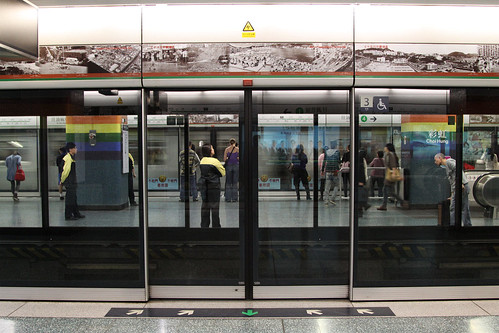 Past Choi Hung not much interesting happens: the stations are all the usual cut and cover boxes, with the only difference being the colour of the mosiac tiles.

Kowloon Tong is a busy station, as it is the most convenient interchange for East Rail passengers from the New Territories to reach central Hong Kong. For this reason the station has a much larger concourse that usual, with many linkages to the ground level East Rail Line platforms. 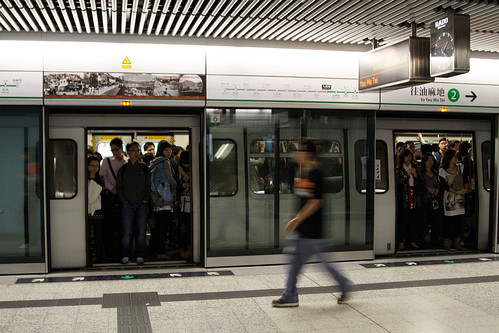 Shek Kip Mei is just another of the same kind of station: 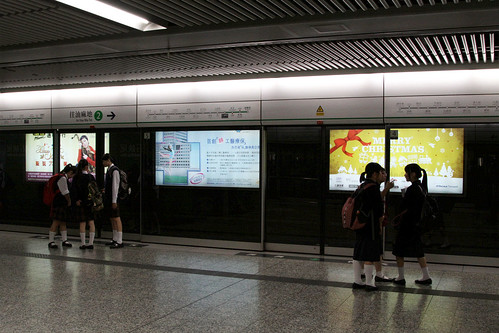 For this reason Mong Kok is an extremely busy station: not helped by the massive number of shopping centres located above the station. 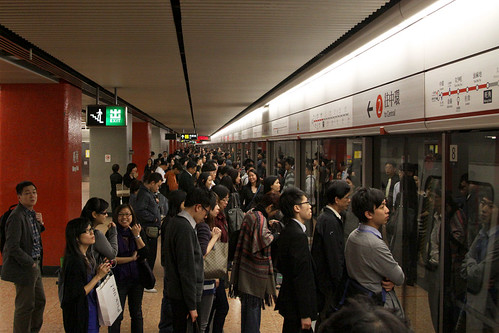 Past Mong Kok the Kwun Tong Line continues one more station to Yau Ma Tei where the line terminates in the platform. When I caught a train there, I noticed a few passengers board at Mong Kok, then remain on the train at Yau Ma Tei, waiting for it to head back out again. With the limited number of seats on board each train, I assume they wanted to grab one before everyone else did. 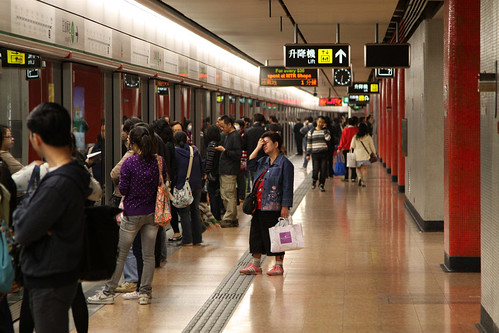 So that is another line down – how many are left?