Overview of the MTR network

Before I go into the rest of the MTR lines, I’ll go through a short overview of the network: 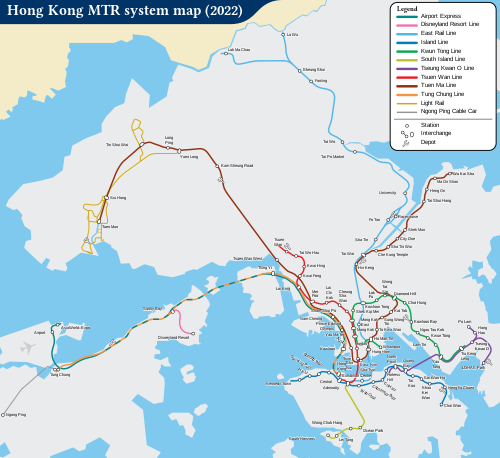 You can see a complete track diagram of the system (including sidings and depots) at this page – the rest of the site is rather interesting, at least after you pass it through Google Translate!

You can initially divide the MTR network into two parts: the original MTR underground network, and the former KCR above ground network. There are no track connections between the two networks, and they use incompatible electrification schemes: while both use overhead lines the MTR uses 1500 V DC while the KCR is 25 kV AC. You can also divide it up further, into the following groups:

For further reading, there are at least two websites in English:

If you use Google Translate the previously mentioned website at http://mtr.hk365day.com/ is full of interesting bits, and there is a Chinese only railway discussion board at http://www.hkrdb.net/ that is worth a browse.

4 Responses to Overview of the MTR network