Up in the hills above Hong Kong are a number of wild monkey colonies: I mentioned them in an earlier post.

One of the larger colonies is in the Kam Shan Country Park, where about 1800 monkeys live, in the hills between Kowloon and the New Territories (link). 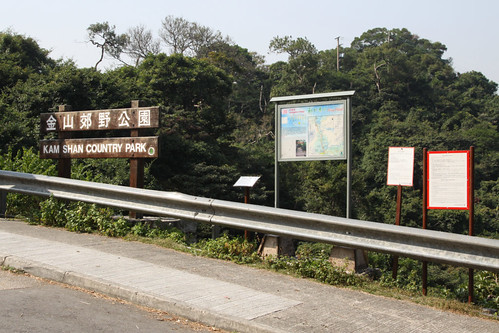 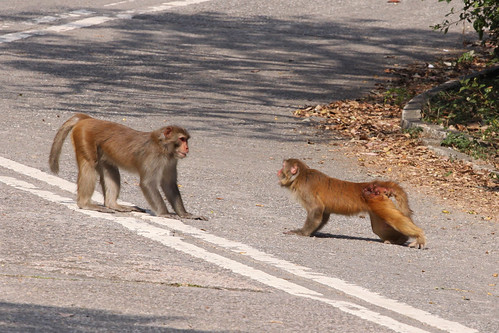 The easiest area to reach is at the Kowloon Reservoir, just a short distance off Tai Po Road, where a frequent bus service operates. 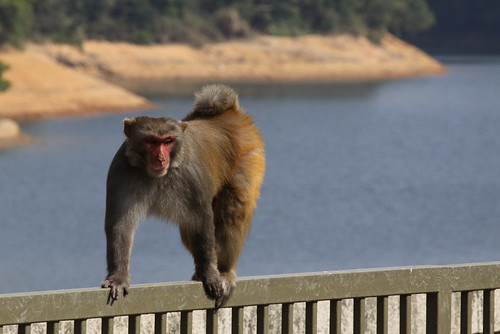 The park isn’t very far away from the urban areas of Hong Kong: at the bottom of the valley the main container terminal is visible: 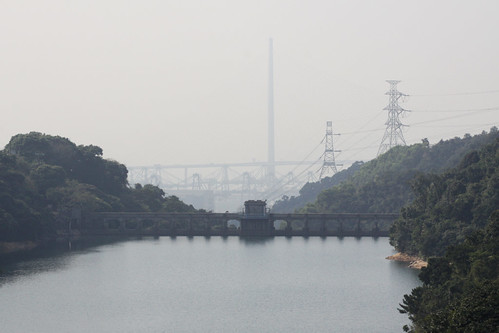 In the other direction is a ridge covered with 20 storey high apartment blocks. 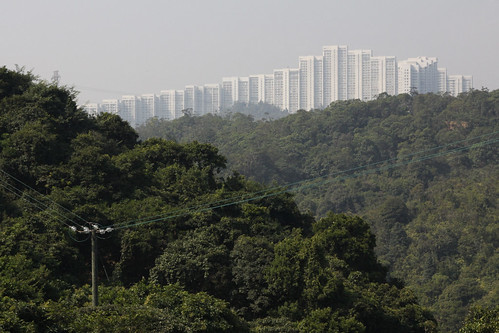 The monkeys are of two main species, the long tailed macaque, and the rhesus macaque. 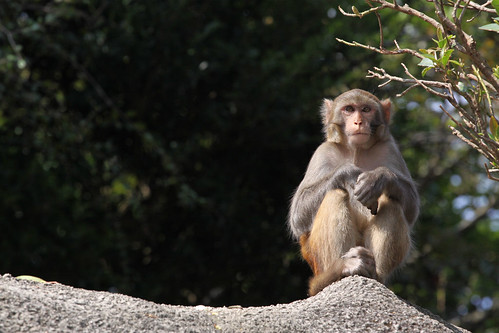 The government believes most of the monkeys are descendants of released pets. 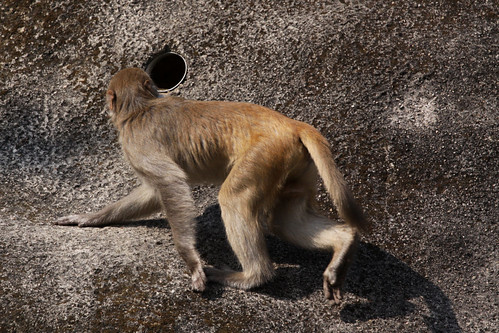 The colony keeps on growing, female monkeys can breed from age four. 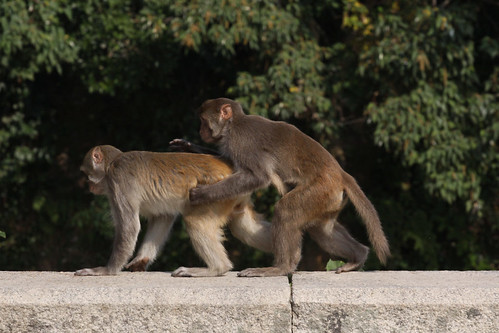 From then on, they can give birth to another baby each year. 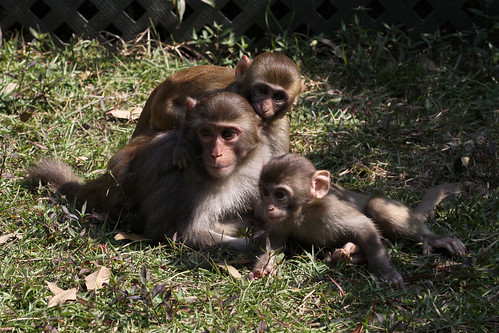 To try to control the population, feeding of wild animals has been made illegal in the country parks. 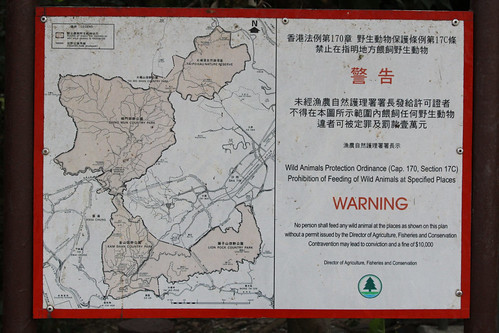 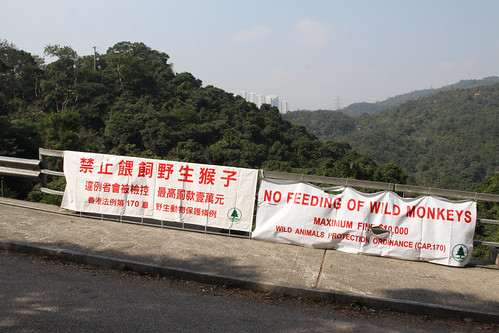 Despite this, the monkeys still chase hikers in an attempt to get food from them. 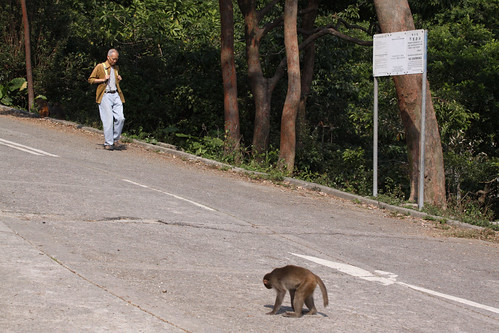 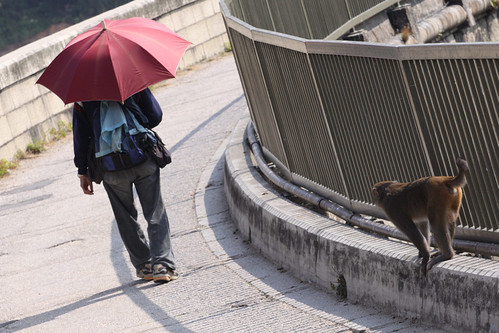 If that fails, they also go digging through rubbish bins around picnic areas. 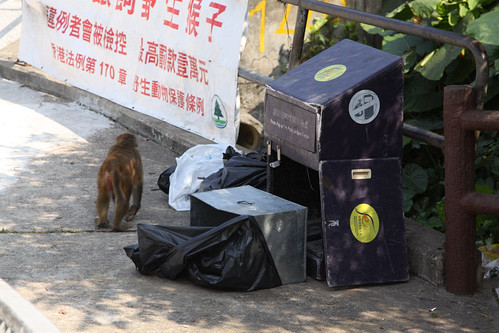 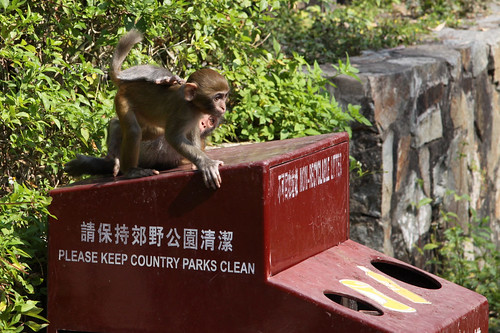 There have also been a number of instances where poachers have captured monkeys for food, along with a number of animal cruelty cases. This monkey was missing a leg: 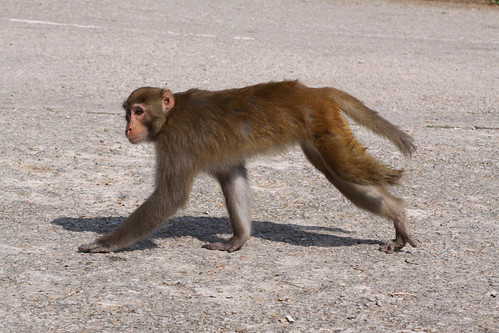 And this one had shrivelled up hind legs. 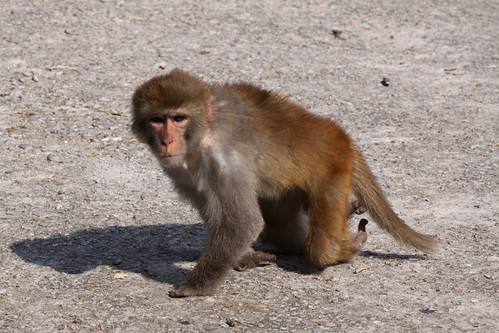 For those playing at home and wondering how to get there: KMB operates a bus right past the entry to the park at Golden Hill Road. You will find the bus stop on this map. The bus itself starts near Kowloon station along Jordan Road, then north up Nathan Road where it heads up into the hills along Tai Po Road until it passes through the country park. Beyond there the bus descends into Sha Tin, stopping at the railway station before terminating in the middle of some random suburb.

For timetables, the route map, and a listing of all of the bus stops, plug route 81 into the KMB website – you are looking for the ‘Shek Lei Pui Reservoir’ stop. Golden Hill Road leads down into the main area where the monkeys lurk: buses from Sha Tin stop at the top of the road. The stop for buses headed in the other direction is a short distance towards Kowloon. 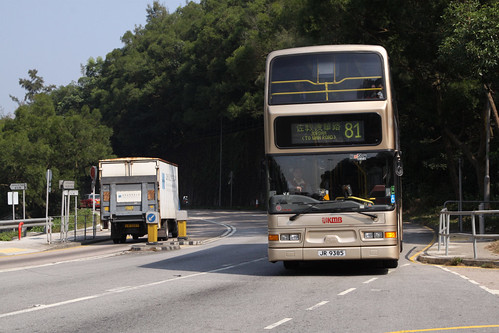 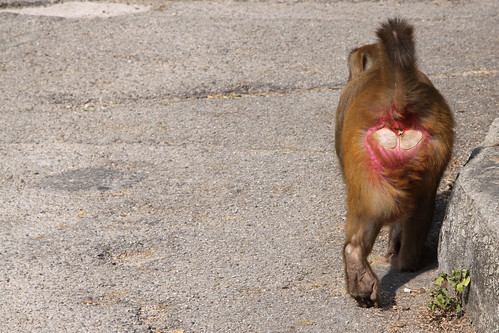 This entry was posted in Everyday Life, Tourism and tagged Hong Kong, monkeys. Bookmark the permalink.