I posted an entry on the Hong Kong International Airport Automated People Mover a few days ago (you can find it here) – due to it growing so long, I am now presenting the details of the rolling stock. 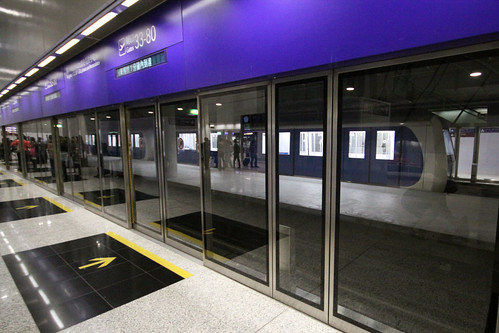 For those just joining, this is what the trains run on…

The automated people mover (APM) uses the “Crystal Mover” system manufactured by Mitsubishi Heavy Industries, which has been used at a number of other airports around the world. Rubber tyred trains are used on a concrete track with steel guiderails either side, the track gauge being 1700 mm with a guide face spacing of 2800 mm. Traction power is 3-phase 600 volt AC 50 Hz, sourced from a rigid conductor 3-wire busbar mounted to one side of the guideway, with side pickup used on the trains.

During my visit I only rode on the Terminal 1 East Hall -> West Hall route, where both phase 2 and 3 trains were in use. It appears that all trains run as 4-car consists, with 2-car sets being coupled into pairs if need be. The main spotting feature to determine the manufacturer of the train is the cabs.

The original Mitsubishi Heavy Industries cars (phase 1) look different from their standard Crystal Mover design used elsewhere, having a single curved window at the front of the train. I didn’t see any myself, but the Mitsubishi website has a small photo of one on their test track.

The IHI Corporation cars (phase 2) look virtually identical to the earlier Mitsubishi stock, except for the longer consist, and the use of a three piece front windscreen instead of the single piece seen on the phase 1 cars. 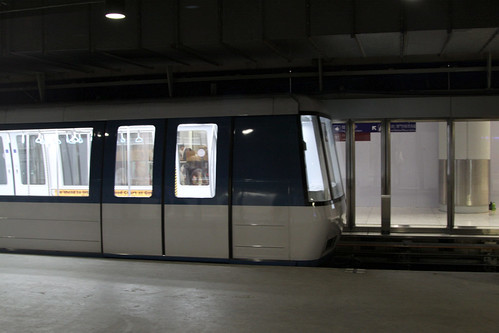 The second order of Mitsubishi Heavy Industries cars (phase 3) have a different design to the rest of the fleet, and look more like standard Crystal Mover stock, having boxy sides and a small front window. 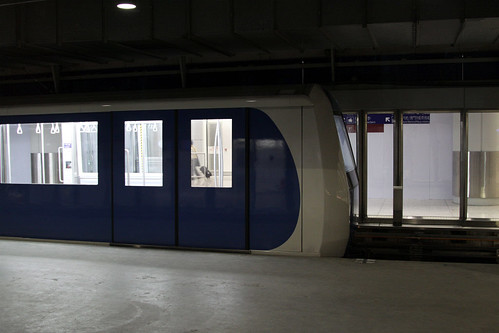 The interior of the cars is spartan: because the trip is only a minute or two, only a few seats are provided inside the train for the infirm and disabled. This is the interior of a Mitsubishi phase 3 car: 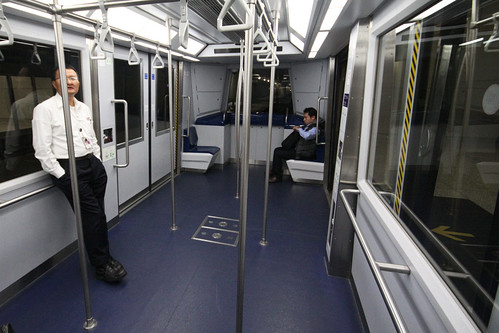 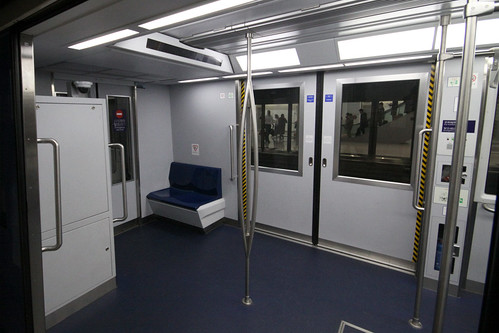 There are also CCTV cameras inside the train. I initially thought they were just for monitoring purposes, but they are in fact part of a sophisticated machine vision system, which can automatically detect abandoned objects inside the carriage, within 30 seconds of the doors closing. 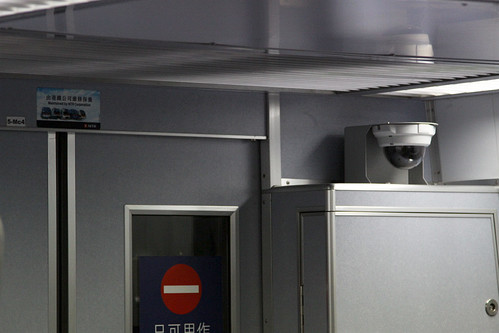 An Automatic Train Operation (ATO) system is installed in each train to control the acceleration, deceleration and door operation; with an independent Automatic Train Protection (ATP) system as a safety device.

The ATO system is made up of three parts: onboard the train, between the tracks, and at the station. Each train determines the current location using an onboard antenna, which detects a coded signal transmitted by an inductive loop coil installed in the centre of the concrete track. This data is then fed into the controller to determine the speed allowed. Automatic operation of doors is controlled by a transponder located at each station, with control signals sent between the station and train equipment to ensure the train and platform doors are opened and closed at the correct time. 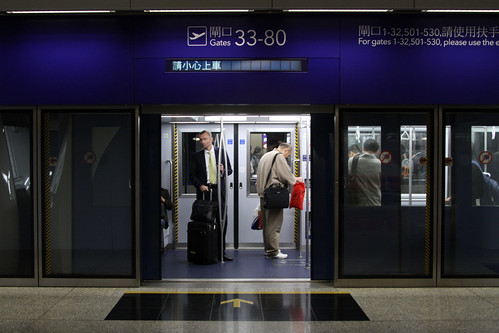 The ATP system transmits speed information to the train via a second set of inductive loops installed along the track, the signals being received by the antenna under the train. The track network is divided into fixed blocks, with speed restrictions determined by:

Train detection is via a ‘check-in/checkout’ system, using antennas installed at the front and rear of the train, and detectors along the track.

The phase 2 trains are a 4-car set: here is a diagram:

The specifications for each carriage in the above train are as follows:

To finish up, here are a few interesting links with some more pretty pictures of the trains to check out: