On Monday I took you on a guided tour along the East Rail line – but what about the MTR trains that run along it? Today they are are the longest EMUs in Hong Kong, being 12-cars long, while other lines only use train sets up to 8-cars long. But what else sets them apart from the rest of the fleet?

Two classes of EMU are used to provided the MTR service: both types are identical from a functional perspective, each carriage having five doors per side and longitudinal seating, with the exception of one carriage – I’ll get to that one later! Side by side the styling differences are quite apparent, with the refurbished Metro Cammell unit on the left, and the streamlined looking SP1900 set on the right. 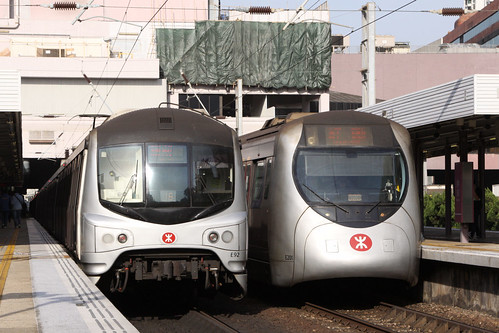 The Metro Cammell EMU fleet forms to core of the East Rail fleet, with 29 12-car long sets in service today, having received a mid life refurbishment by Alstom between 1996 and 1999. Originally ordered as part of the modernisation of the Kowloon Canton Railway, the first trains were delivered from 1982 having been manufactured at the Metro Cammell plant in Birmingham, England. Further units were ordered in 1986 and 1990, taking the total number of carriages built to 351.

The EMUs were initially formed as 3-car long sets, except for the final order when 6-car sets were specified. End communication doors were provided in the cab cars, permitting longer trains to be formed, up to 12-cars long. This 1998 photo by Joseph K.K. Lee shows a Metro Cammell EMU in original condition, with at least three 3-car sets forming the train. The yellow cab resulted in the nickname “yellow head” being given to them.

The Metro Cammell trains were original built with two different styles of interior layout: one for the inner suburban service as far as Sha Tin, and the other with toilets and luggage areas for the outer suburban service towards the border crossing at Lo Wu. As this 1992 photo by Joseph K.K. Lee shows, the interior does not look like a mass transit vehicle, with each carriage having a reasonable number of seats and three doors per side. 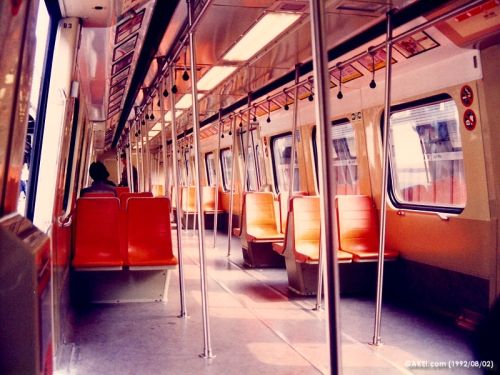 Promotions for the KCR during this period also emphasised the “travel” nature of the service, not the everyday home to work commute.

By the mid-1990s patronage on the railway had skyrocketed with the development of the New Towns along the route, so a decision was made to refurbish the fleet to mass transit standards. The work was carried out by Alstom between 1996 and 1999, and resulted in the look seen on the trains today. 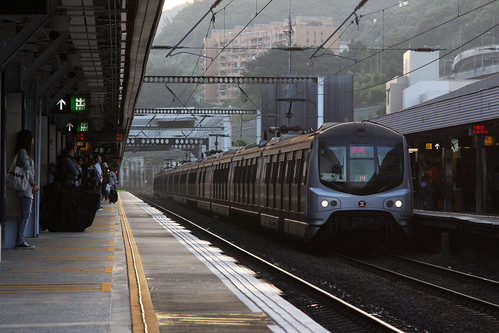 The exterior changes included the formation of the carriages into fixed 12-car sets, the elimination of the end communication doors from the driving cabs, removal of toilets and luggage areas from the passenger saloon, and increasing the number of doors per carriage from 3 to 5 per side.

A more disruptive change for passengers was the mass removal of seats, with the side by side seating replaced by longitudinal benches along the carriage walls, to allow for more standing room. Along with the increased number of doors, this gave the refurbished KCR trains the same passenger handling ability as trains on the MTR underground lines. 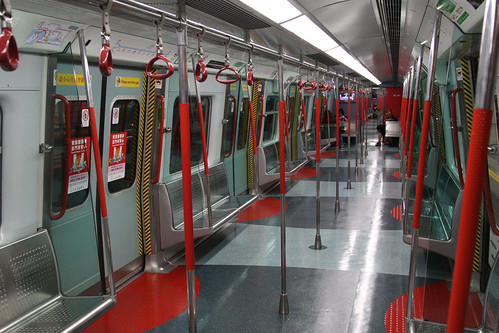 Despite converting East Rail into a metro style rail service, continued patronage growth resulted in the need for additional train sets, achieved in 2001 with the delivery of the “SP1900” EMU fleet. Built by the Japanese firms of ITOCHU, Kinki Sharyo and Kawasaki Heavy Industries, only eight 12-car train sets were built for the East Rail line, but the same design was used for the trains delivered for the KCR’s later West Rail and Ma On Shan Rail projects. 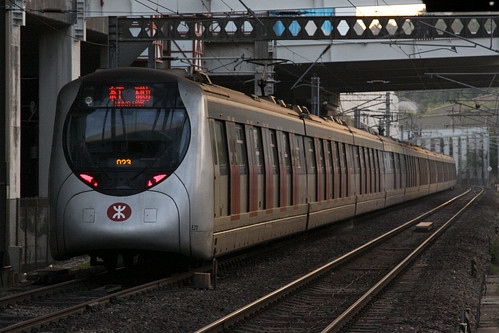 The interior followed the metro layout of the refurbished trains, with the same door spacing, and longitudinal seating. (this photo is from inside a Ma On Shan line SP1900 train, since I never got a good shot inside the East Rail version) 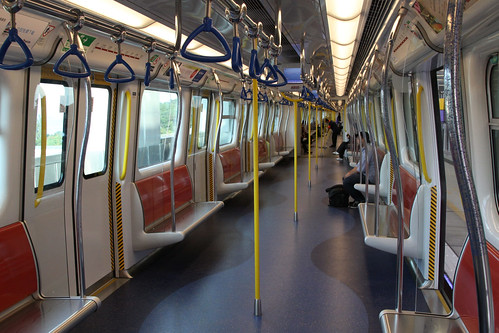 Despite their transformation made to the KCR since electrification, trains on the East Rail line still have one small element tying them back to their suburban roots: their first class compartments. 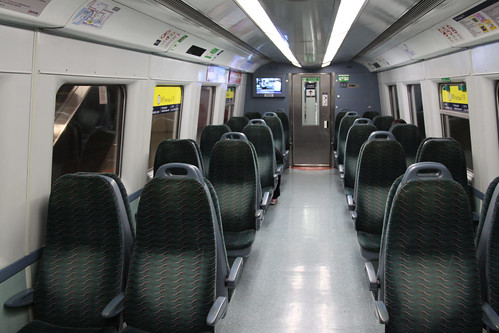 It is an interesting option for passengers, given the longest possible end-to-end travel time is just on 40 minutes, why do people decide to pay the extra for first class?