Macau: the city built on casinos

Macau is an odd city – for foreign tourists the main lure is the mix of Portuguese and Chinese culture, but for the majority of Hong Kong people it is all about the casinos.

Some people call Macau the “Monte Carlo of the Orient“: with gambling taxes making up over 70 per cent of the Macao government’s total revenues, and total casino revenue occasionally exceeding the Las Vegas Strip, the gaming industry is what drives the city. 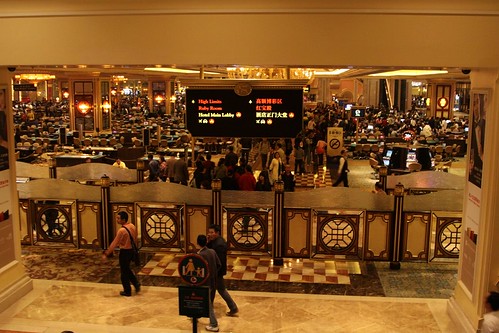 The Macau casino industry is a cuthroat game, with six concessionaires operating a total of 33 casinos in the city. As soon as one steps out of the ferry terminal from Hong Kong, you will be met by a wall of spruikers drumming up business for their respective casinos. 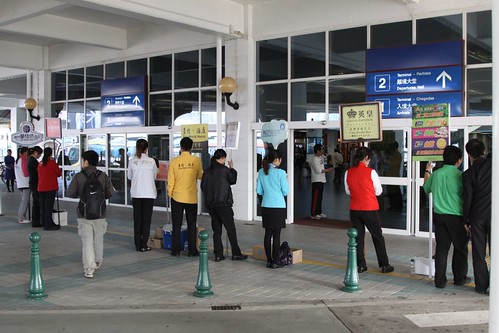 In their fight for gamblers the casinos have killed the tourist market for taxis: one can get around most of Macau just by boarding one of the many casino shuttle buses. The difficult part is weaving your way through the traffic jam outside the ferry terminal. 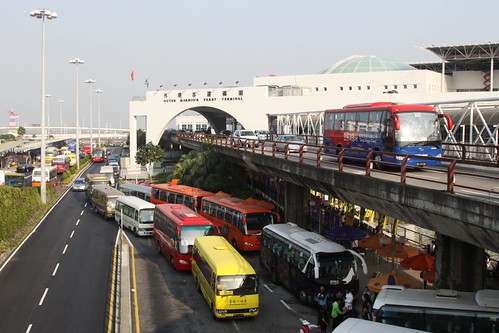 Despite the intense competition in the Macau casino market today, it has not always been this way. The “big money” era of Macau casinos dates to 1962, when a monopoly casino concession in the then-Portuguese colony was granted to a company named Sociedade de Turismo e Diversões de Macao (STDM). After a few years of small scale operations, the company opened the iconic “Casino Lisboa” in 1970. 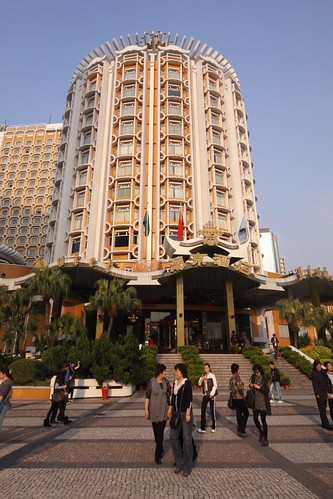 The improvement of the ferry service drove the growth of the Casino Lisboa, the 60 minute ferry trip luring Hong Kong’s rabid gamblers to spend up big in Macau. Far East Hydrofoil commenced revenue operation of Boeing 929 Jetfoils on the Hong Kong – Macau route in April 1975, with the fleet still operating today under the TurboJet name, along with a fleet of newer catamarans. 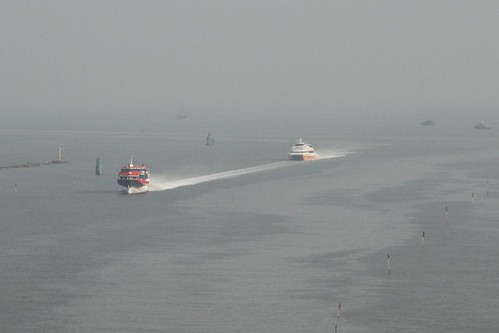 Meanwhile the leader of the casino monopoly, businessman Stanley Ho Hung-Sun, amassed a massive personal fortune to become the 13th richest man in Hong Kong by 2008. With money to burn, he filled his casino with an array of priceless Chinese cultural antiquities, all on public display. 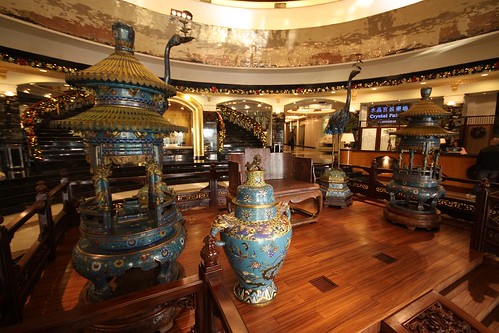 Stanley Ho also turned his eye to the local skyline: after being impressed by the Sky Tower in Auckland, he commissioned the construction of the similar looking Macau Tower, completed in 2001. 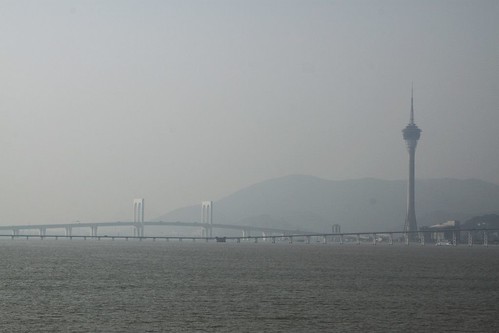 Unfortunately for Stanley Ho all good things come to an end, when in 2001 the Macau government announced that they would be holding an open bidding process for new casino concessions, ending his 40 year monopoly. Three concessions were initially granted, later expanded to six.

Tied in with these new casino licences was a massive land reclamation program to provide somewhere for the new casinos to be built. The first of the new casinos were located along the shoreline of the Macau Peninsula, such as the Las Vegas-styled Wynn Macau casino. 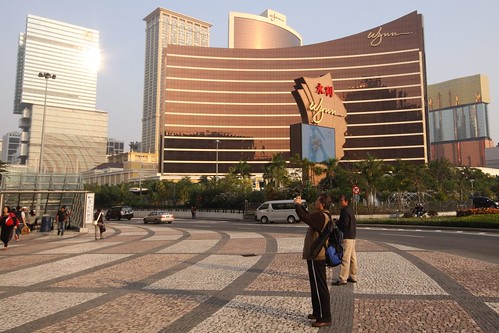 An even more ambitious plan was the development of “Cotai” – a 5.2 square kilometre strip of newly reclaimed land that connects the islands of Taipa and Coloane (the name is a portmanteau of the two). The bulk of the land is dedicated to new casino resorts, with more casinos still under construction, such as the Galaxy Macau. 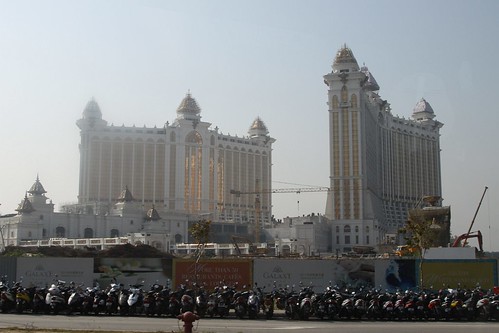 The current largest casino on Cotai is The Venetian Macao – it is also the fifth-largest building in the world by area, featuring a massive gaming floor, convention centre, shopping mall, entertainment arena, and a 3000 suite hotel. 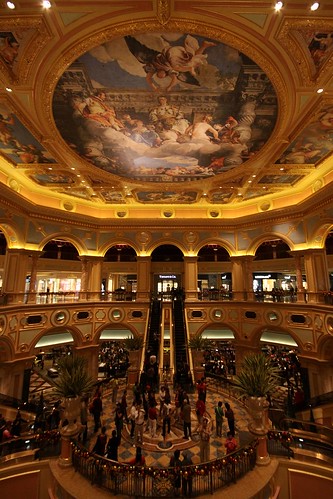 If massive atriums are not enough, the $2.4 billion complex also features a network of canals running through the shopping mall. You can even go on a gondola ride… 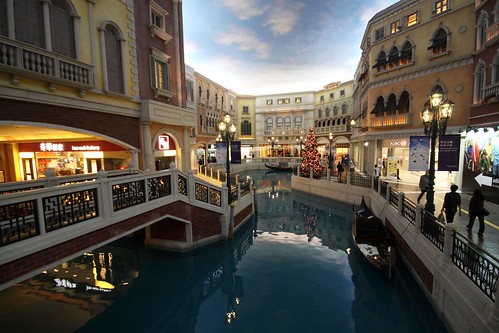 Despite this new competition, Stanley Ho and the former monopoly casino operator STDM have not stood still, now operating 20 casinos in Macau and with no end to the kitsch in sight! One example is “Casino Babylon”, located near the ferry pier in the middle of a theme park, the complex also features a mock Tang Dynasty fortress, and a 40 metre tall replica volcano. 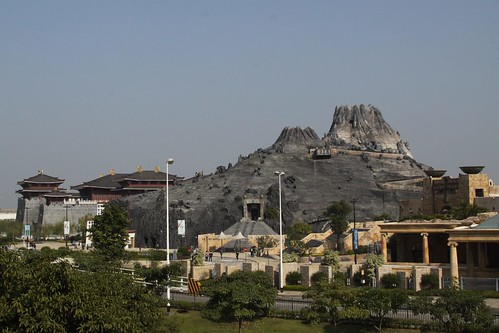 Over the road “Casino Oceanus” also isn’t afraid to imitate others, with the bubble walls being a knock off version of the “Water Cube” that served as the swimming venue for the 2008 Beijing Olympic Games. 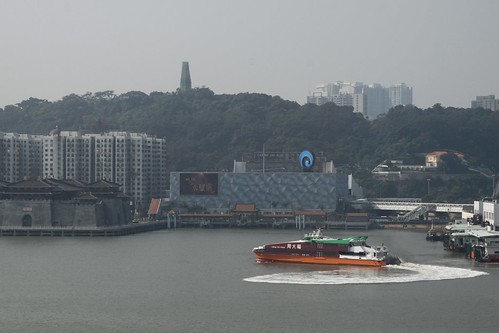 Finally, the biggest display of kitsch is the Grand Lisboa casino: located across the road from their former flagship, the 58 story hotel tower is now the tallest building in Macau. 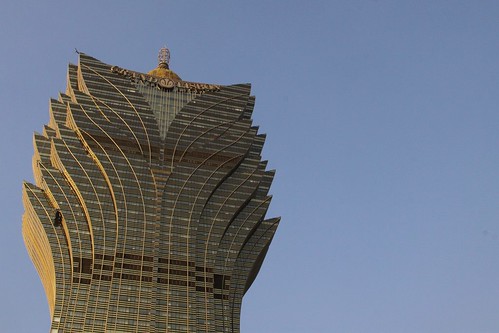 Despite all of these new casinos, Stanley Ho doesn’t seem to be running out of money, if his purchase of a $100 million diamond is anything to go by. Named after himself, “The Star of Stanley Ho” is the largest diamond of its kind in the world, and is on display in the Grand Lisboa casino foyer. 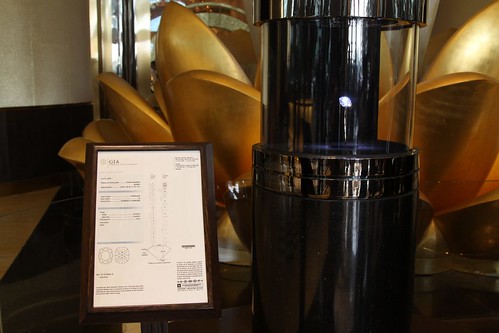 This entry was posted in Tourism and tagged gambling, Macau, tourist trap. Bookmark the permalink.

2 Responses to Macau: the city built on casinos