Fill ‘er up thanks!

In any city with cars, there needs to be petrol stations to fill them up. However in a densely populated city like Hong Kong, where do you put them? 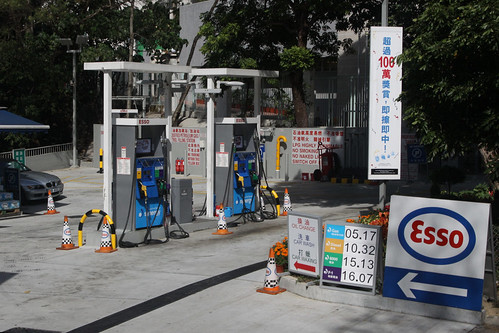 In urban Hong Kong petrol stations are placed right among skyscrapers: this Caltex filling station in Wan Chi on Hong Kong Island is actually located at the ground floor of a multi story building, as the land is too precious to waste on a flat piece of concrete. One would hope the safety requirements for building on top of a petrol station are extremely stringent! 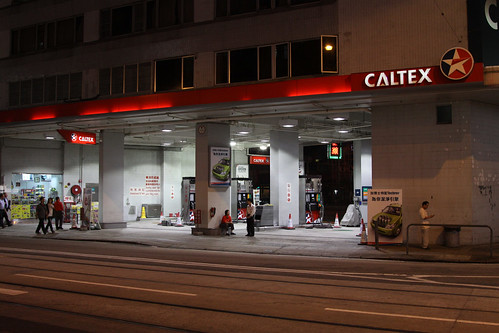 Elsewhere in the city slightly more conventional petrol stations are found along main roads, tucked into hillsides on land that would otherwise go to waste. This Shell filling station in Aberdeen is at the foot of a hill, the surrounding slopes covered with trees. 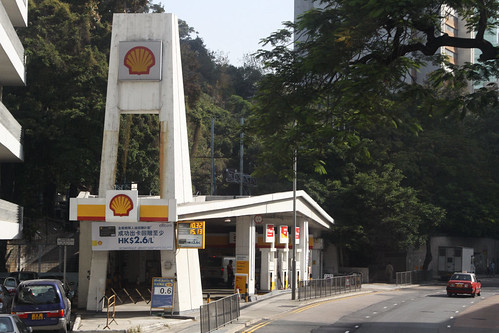 As you can see, these petrol stations are on the small side, at least compared to those in Australia. This Esso station near Wong Nai Chung Gap, on Hong Kong Island takes things a step further, the hillside having been cut back to provide a flat piece of land. You can see the rock bolts and shotcrete used to hold the soil back – Safe Slopes Save Lives. 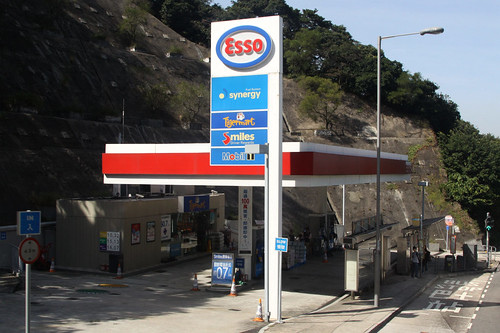 At least in Hong Kong the vehicle fleet is small – in the 2010 census there were only 608,000 motorised vehicles in the city, serving a population of about 7 million. Serving the motorists are seven petrol companies: some are local, while others are branches of global multinationals:

In 2010 there were 206 public filling stations registered with the Hong Kong government; as well as 124 privately operated filling stations, located at fire stations, truck depots, airports, driving schools, and military bases. (the full list is here)

Government regulation of petrol stations in Hong Kong doesn’t just include registration of the site – petrol stations can only be built upon land dedicated for the purpose and leased from the government. This is due to the system of land tenure used across the city – there is no such thing as freehold land in Hong Kong – the government owns every piece of land in the city, making it available to land developers on the payment of a one-off land premium, followed by annual rent payments.

Current policy sees companies given leases on petrol station sites for fixed 21 year terms, these being assigned through a competitive tendering process based on the land premiums a company is willing to pay. “Winning” only gives the company the 21 year term to recoup their investment: on expiry of the lease the site is again put out to tender, allowing any other company to pick it up. Some examples from 2003 of the land premium charged to acquire a petrol station site are as follows:

Note these examples were for empty pieces of land, not existing petrol stations! Imagine spending US$10 million for a bare piece of land and still needing to build a petrol station: over the 21 years lease, you need at least US$476,000 a year in profits just for the land premium. 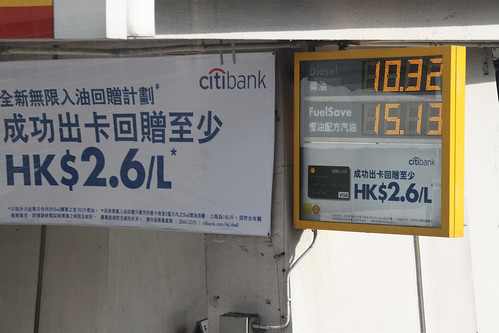 So that might explain paying HK$15 a litre for unleaded petrol?

This entry was posted in Everyday Life, Transport and tagged driving, Hong Kong, on the road. Bookmark the permalink.

6 Responses to Fill ‘er up thanks!