Last year I asked the question – “Why does Hong Kong love mosaic tiles?” Thankfully I am now closer to the answer, after I found an academic paper dedicated to the study of wall finishes in Hong Kong and the progressive change from paint to mosaic tiles.

Titled A Survey of Materials Used in External Wall Finishes in Hong Kong and authored by Daniel C.W. Ho, S.M. Lo, C.Y. Yiu and and L.M. Yau; the paper was published in the December 2004 issue of Hong Kong Surveyor, Vol 15(2), pages 7-11. It also cites a number of other papers that discuss the wall coverings used in Hong Kong.

In the paper the authors state that paint was the most popular external wall finish up until the 1970s, and this can be seen when looking at older Housing Authority apartment blocks around Hong Kong – pictured is Mei Tung House in Kowloon, dating back to 1974. 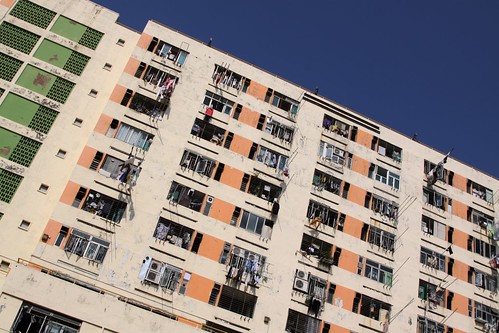 Reasons for a move away from painted walls is obvious: the paint peels and fades over the years, and when the time comes to repaint access to a multi-story building is rather difficult. A paper by Shui On (1984) states a typical Hong Kong building will need repainting every 3 to 5 years, and that the maintenance costs for painted surfaces may amount to as much as 25 percent of the cost of a building.

With all of the drawbacks of painted concrete, in the early 1970s cheaply manufactured glass mosaic tiles became a popular alternative, as they are:

The buildings below are just one example of the buildings constructed around this period, being the Housing Authority’s Tung Tau Estate, constructed in Kowloon City between 1987 and 1992. Here two colours of mosaic tile are used to break up the bland looking side walls. 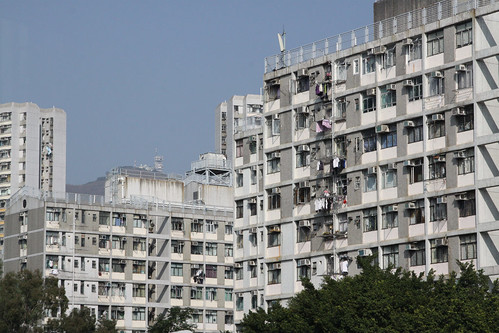 A study reported in Shui On (1984) and carried out between 1981 to 1983 examined the wall cladding used on 487 newly completed construction projects in Hong Kong, with 310 being private housing developments. It was found that more than 80 percent of the sample used mosaic tiles, spray-on coatings were second (8-15 percent) and paints ranked third (5-18 percent), with ceramic tiles being the least used (4-6 percent).

One downside of mosaic tiles is when they fall off: if they drop from the top levels of a high rise building they can cause serious damage to anything down below. For this reason larger ceramic tiles with modern tile adhesives have been used on more buildings since the late 1990s, as they require fewer joint areas than mosaic tiles, meaning the tiles are less likely to fall off.

It is just possible to see the larger ceramic tiles used on this tower: the Park Avenue complex developed by MTR Properties and Sino Land in 2001. Unlike the previous buildings pictured, this building is part of a private housing estate for the middle class, not a Housing Authority public housing development. 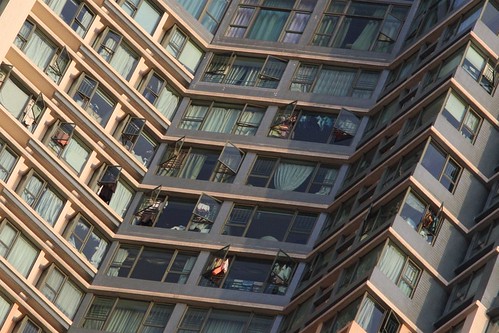 Public housing has been slower to move to ceramic tiles, instead opting to use a use a mix of mosaic tiles and painted precast concrete – this tower was under construction in 2010, the only thing missing is tenants. 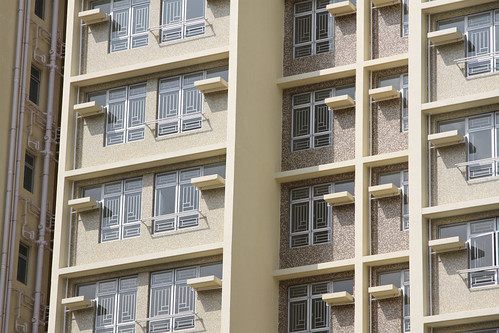