Learning to drive, and getting your 學 plates

Want a car in Hong Kong, but you don’t have a drivers licence? Then you’ll have to track down a driving instructor to teach you. Owing to the bilingual nature of Hong Kong the “L” plates on the cars of learner drivers have both English and Chinese characters on them – “學” means to learn. 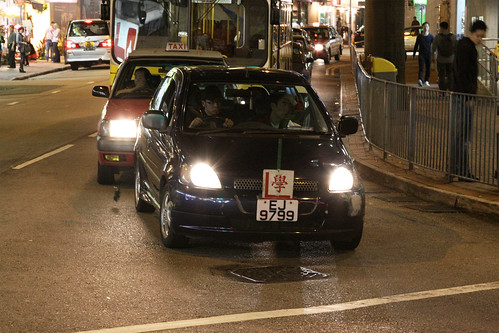 Hong Kong’s learner drivers appear to fall into two groups: people with money to burn and who want their own private car, and young men looking to get jobs as delivery drivers. The latter group is behind the large number of commercial vans found at driving schools. 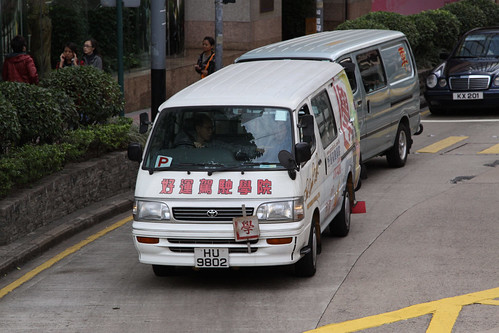 With the heavy traffic on roads throughout Hong Kong, you have a good chance of spending your 45 minute driving lesson stuck in a traffic jam. For this reason driving schools are popular in Hong Kong, being big enough to have their own miniature road network for the use of learner drivers. With their own roundabouts, stop and give way signs for learners, this driving school at Kwun Tong is built over two stories due to the lack of land in urban Kowloon. 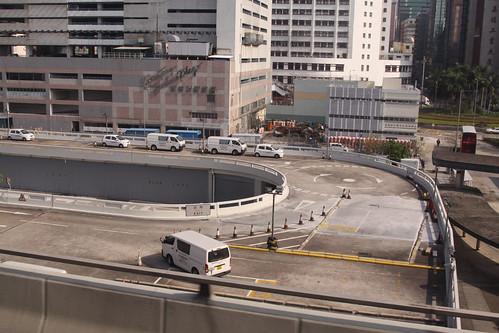 A final complicating matter are the roads learner drivers are not allowed to practice on. Freeways are the first case: quite reasonable, given the speed of traffic is much higher than local roads.

No person who is authorized to drive a motor vehicle only by virtue of his being the holder of a learner’s driving licence shall drive or use any such vehicle on an expressway. (Enacted 1991. 23 of 2008 s. 56) 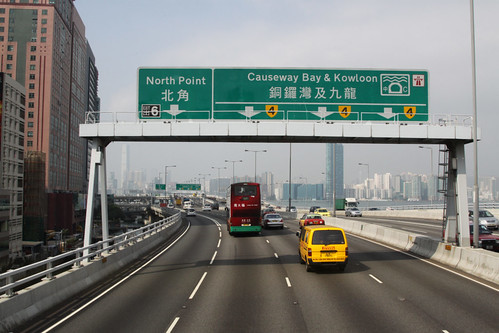 The more confusing prohibition signs are seen on random streets around Hong Kong: some of the roads were rather narrow roads up hillsides, while others were dead end streets leading nowhere. 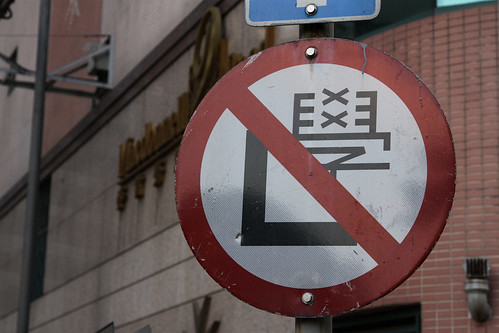 At first I thought it was another safety measure, but this article by Martin Wong and Ada Lee from the South China Morning Post (May 29, 2011) sheds a little more light on the situation:

Traffic laws ban learner drivers from practising on roads used for driving tests, but the lack of enforcement means instructors and their students use those roads with impunity.

Some instructors openly admit they advertise their use of banned roads to give students an advantage.

“Many instructors allow their students to drive in [prohibited] zones just to impress them, by giving them a chance to practise on the test road, so they would refer friends to them,” Chu Kong-shing, who has been a driving instructor for more than 30 years, said.

There are 391 locations in the city where learner drivers are banned, but instructors said it was not uncommon for learners to break the rules.

A popular location is Broadwood Road in Happy Valley. A big sign states that learner drivers are barred from practising there.

But within a 30-minute period last week, South China Morning Post reporters observed at least a dozen training vehicles drive by; at least half of them were driven by students, the rest by instructors. Among them, six belonged to the Lee Kin Driving School, one of the biggest driving schools, with more than 100 driving instructors.

Chris Lee, its managing director, said its instructors barred students from practising in no-drive zones.
“If you see any of our training vehicles in the area, it must be driven by an instructor,” he said. “We do not allow students to drive on that road.”
Lee added: “That is where learner drivers take their driving exams. Very often, our instructors will drive in the area before the exam to show students what they should do.”

But, without commenting directly on any driving school, Chu said many instructors did more than just show students the area’s layout.
He said the section of Broadwood Road was short, and it was tempting for learners to practise there even if they risked being prosecuted.
“It takes at most 10 minutes to complete the section. When they see there are no police around, they will take the risk,” Chu said.

A learner driver found driving on a road with the “Learner drivers prohibited” sign faces a fine of HK$5,000 and three months in prison on first conviction. A subsequent conviction could draw a fine of HK$10,000 and six months’ jail. The instructor is not punished. Figures for convictions and penalties handed out were not available yesterday.
May 29, 2011

So that explains all of those signs: they mark the “secret” roads for driving tests! 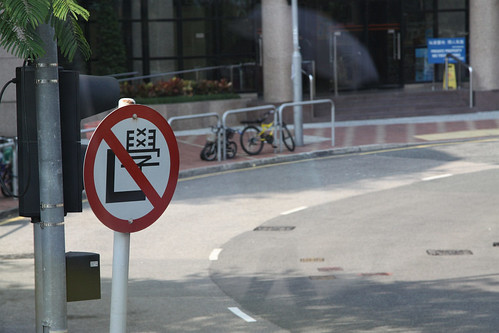 This entry was posted in Everyday Life, Transport and tagged driving, Hong Kong, on the road. Bookmark the permalink.

4 Responses to Learning to drive, and getting your 學 plates