Operations on the Hong Kong Tramways

The other day I had a quick look at the Hong Kong Tramways, while today I am going to have a look at the more operational details. First up is the signalling used, or lack thereof. 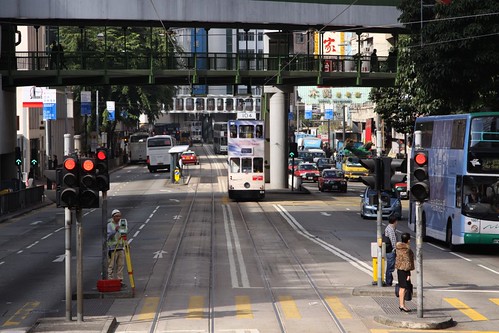 The entire network consists of on-street running, with no reserved track apart from some sections of dedicated tram lanes on road, so each driver need only maintain separation from the tram in front visually. At pedestrian crossings or road intersections standard traffic signals are used to direct trams, but with dedicated tramway aspects displayed. 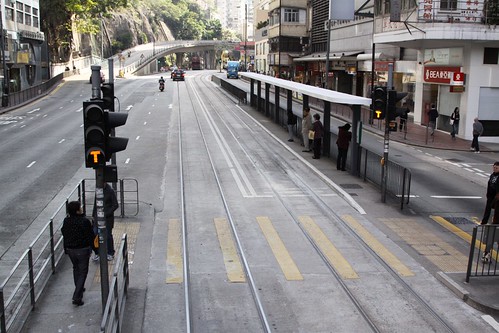 Signals for trams use the same phases but the green is replaced with an amber ‘T’, to prevent car drivers from being distracted by a signal that does not apply to them. In Melbourne the same logic applies to tram-only traffic signals, but a white ‘T’ is used instead.

Intersections such as the one below show how a motorist could be distracted by the tramway signals. 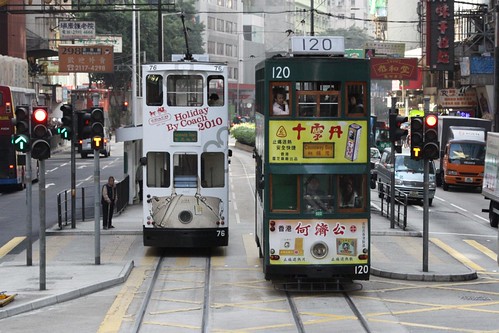 The other infrastructure item of note is the control of points at junctions. For trailing points nothing is needed as trams can pass through without interruption, other than some signs in Chinese that I don’t understand. 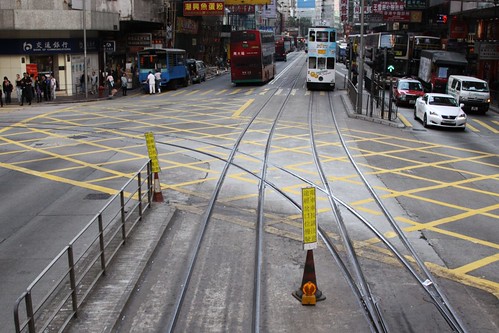 Also around the network are a handful of trailing crossovers, which are presumably manually operated by a point bar inserted into the mechanism by the driver. These crossovers are not used in revenue service, due to Hong Kong’s tramcars being designed for a preferred direction of travel. 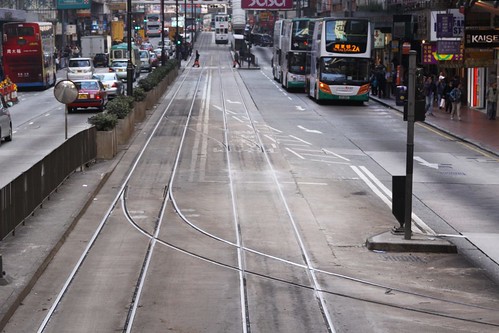 The final case is facing points located at intermediate termini, route junctions or depot entrances. Due to the number of trams using the network and a multitude of destinations, facing points are all power operated by drivers from their cab, using a system that looks identical to that used on the MTR Light Rail, which itself looks very similar to the V-Tag system used in Melbourne. 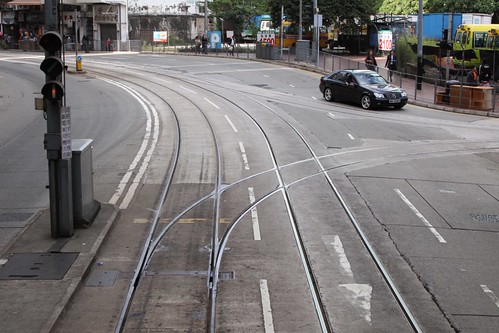 Power operation of points was first introduced to the Hong Kong Tramways in 1992, ending the use of pointmen at junctions to manually throw the points for drivers. I did not have a close look inside the Hong Kong tram cabs, but in Melbourne’s V-Tag system drivers operate the points via a dashboard switch, with the desired route setting transmitted to the control unit via an induction coil between the rails. The signal on the post beside the points indicates to the driver which route is currently set:

Again the two cities use the same aspects for their route indicators, except Melbourne uses a horizontal bar instead of Hong Kong’s white lamp.

In all Hong Kong Tramways seem to have a lot in common operationally with Melbourne’s network, despite the gauge difference and the double-deck tramcars.

9 Responses to Operations on the Hong Kong Tramways