Hung Hom station is the southern terminus of the Kowloon Canton Railway, which also makes it the final destination of the ‘Intercity Through Trains’ which link Hong Kong to China.

The majority of these services are made up of a single locomotive hauling a rake of carriages behind, which requires the locomotive to be moved to the other end of the train for the return journey.

Unlike most railway stations that provided a headshunt and run-around loop to enable this movement, the Hung Hom station site is very constrained, resulting in a series of dead end platforms with no additional tracks between them.

To work around the space constraints, when the current station opened in 1975 a traverser was installed to move locomotives sideways between adjacent tracks, releasing them from behind the carriages sitting in the platforms.

A turntable was also installed in the station yard to enable single ended locomotives to be turned around, placing the drivers cab facing the direction of travel.

This photo from the 1970s shows the turntable was located to the east of the locomotive shed near the ferry pier, with it remaining in place until at least 2008, as this photo of KCR locomotive #53 shows. With the introduction of locomotives with a cab at each end on most trains, the turntable was removed and today the site is occupied by the ‘Metropolis’ development.

As for the traverser, it is still in use today, though shortened to only serve platforms 5 through 7. Platforms 1 through 4 were modified back in 2004 when the East Rail line was extended south to East Tsim Sha Tsui Station, which converted platforms 2 and 3 into through platform.

Viewing the traverser is difficult, due to the high steel fence separating the secured international platforms from those used by normal MTR services. However from the south end of platform 4, the end of traverser can just be seen – here a China Railways SS8 electric locomotive is being moved sideways from the end of platform 5.

This photo by Steve McEvoy shows the traverser itself, viewed from inside the operating pit that it moves along. 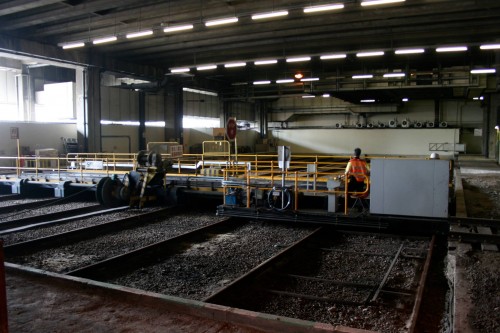 Above photo by Steve McEvoy

KCR staff nicknamed the traverser Deep Fried Crab (油炸蟹) with the name coming from its resemblance to the food item: the traverser deck being the shell, and the wheels being the crab legs.

Note that the turntable at Hung Hom is not to be confused with the original KCR locomotive depot – pictured here (via this forum thread). The story of the relocation of Kowloon station can be found on the Industrial History of Hong Kong Group website.

3 Responses to Traversers and turntables at Hung Hom station