Underground stations – living in the 1970s

I don’t visit Sydney, Australia often, but the last time I did, I spent my time in much the same way I did during my last trip to Hong Kong – riding around on trains and ferries.

During my travels I passed through the underground platforms at Redfern station for the Eastern Suburbs Railway.

On seeing the escalator shafts I was immediately reminded of Hong Kong – the brown mosaic tiles took me back to the older parts of the MTR network, such as Sheung Wan station on the MTR Island Line. 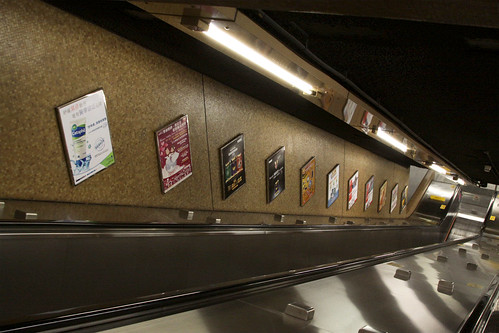 The answer is yes: while Sydney’s Eastern Suburbs Railway and Hong Kong’s MTR network were both constructed during the late 1970s and has similar cost constraints placed upon them, different architecture firms were involved in each city.

For the Sydney station, the heritage listing for another ESR stations describes the brief presented to the architects responsible, Fowell Mansfield Jarvis and Maclurcan Pty Ltd:

Each of the new stations on the ESR, designed by Sydney architects Fowell Mansfield Jarvis and Maclurcan Pty Ltd, was given a unique colour scheme to differentiate it from the others and to give the new stations a modern look and maintaining a human scale in the underground setting.

As for Hong Kong, every station on the original MTR network was designed by one man – Italian architect Roland Romano Paoletti. This article about London’s Jubilee Line Extension details the rise of his career, and the constraints he had to work with:

The manner in which a whole new underground system was slashed into the fabric of Hong Kong was impressive but brutal, and hardly conducive to grace. Accountants were in charge; there were neither town-planners nor structural engineers, let alone architects, just mud-movers and alignment engineers.

In the stations, Paoletti ended by reducing to basics the elegant fit-out proposed by the English gentlemen Modernists of Sir Misha Black’s Design Research Unit. The Hong Kong lines were built by the cut-and-cover method, not in deep-bored tunnels, so the stations emerged as raw, horizontal caverns, vast enough to accommodate trains twice the length you have in London, and differentiated by colour alone. Efficiency was the brief, not salvation.

The similarity makes me wonder – have architects from other cities around the world also borrowed the same palette of mosaic tiles to decorate their railway stations.