From September to December 2014 protests occupied many streets across Hong Kong, in what was known as ‘Occupy Central’ or the ‘Umbrella Revolution’. As well as forcing road traffic to take alternate routes, the protests also disrupted tramway services on Hong Kong Island.

(the above photo by ‘Wing1990hk’ is from the Wikimedia Commons)

Tram tracks were blocked by protesters at two locations – Queensway in Admiralty and Yee Wo Street in Causeway Bay. The Hong Kong Tramways issued their first service update on 30 September 2014:

By October 10 the Hong Kong Tramways negotiated with the protestors for temporary access to the tram tracks at Admiralty, allowing eight tramcars to be transferred from the Whitty Street Depot to Happy Valley, allowing a limited service to be returned to the otherwise isolated tracks.

Due to the closure of the tram track section at Admiralty and Causeway Bay, tram services are temporarily disrupted until further notice. Services between Kennedy Town and Pedder Street (Central), between Shau Kei Wan and Victoria Park and services along the Happy Valley Loop are maintained. We apologize for the inconvenience caused and look forward to resuming normal services.

On October 15 the section of track through Admiralty was reopened to trams, and on October 22 a free-of-charge circular route was made available between Victoria Park and Paterson Street in Causeway Bay.

Turning back trams is not simple – Hong Kong’s tram fleet normally operate in a single direction, with reversing loops being used to keep the trams facing the right way at the end of each route. 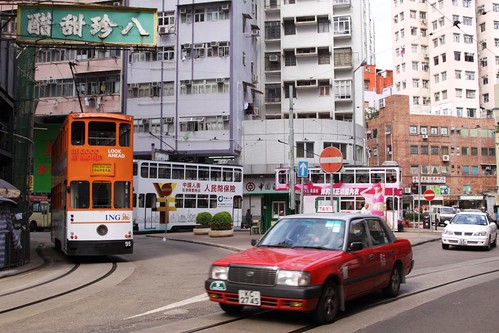 This video by ‘SE 692’ shows the special arrangements put in place at Victoria Park in Causeway Bay, where trams from the east were forced to turn back to Shau Kei Wan.

It also shows some of the spotting features for trams the ‘wrong’ way around, such as:

The use of crossovers to change direction is not normal practice on the Hong Kong Tramways, which is also why the trolley pole has to be manually transferred to the opposite wire – the crossovers themselves are unwired, so there is no other way for the tram to collect power while switching tracks.

Beyond the increased travel times for tram passengers, operating the network in two parts also had implications on the fares charged – each journey is a flat fare, so the disruptions potentially doubled the cost to passengers. As a result free transfer arrangements were also put in place by the Hong Kong Tramways:

In order to mitigate impacts of the prolonged blockage of the tram tracks in Causeway Bay on tram passengers, starting from 30 Oct 2014, daily from 6:30am to 11:30pm, Hong Kong Tramways offers single-trip interchange free tram ride coupons for the alighted passengers in need: –

Each passenger will only be given one coupon upon request, which is valid on the date and the dedicated route only. Passengers shall present the coupon to the driver and put it into the coin box when alighting. Free ride coupon distribution is subject to change without prior notice. Thank you for your attention.

By November 2014 the Hong Kong Tramways claimed that the two months of protests had resulted in 3.9 million fewer passengers using the trams, which cost the company HK$7.8 million in revenue. The South China Morning Post has more on the subject:

Hong Kong Tramways has urged pro-democracy demonstrators to release its occupied track in Causeway Bay, saying it had lost 3.9 million passengers and HK$7.8 million in revenue during the Occupy Central movement.

But Tramways managing director Emmanuel Vivant ducked a question on whether the company would follow Mong Kok transport operators in seeking court injunctions to have the road cleared.

“We are exploring our best options,” he said. “At the moment, we are focused on addressing the situation and trying to deliver the best service.”

Vivant said five of the company’s six routes remained disrupted, with 50 trams on the eastern side unable to return to a main depot for maintenance.

“We have taken a proactive and sincere approach and tried to appeal to the protesters to lift the blockade,” he said. “But we could not reach a consensus with the Causeway Bay protesters despite repeated discussions.”

Tramways reached an agreement with Admiralty protesters to unblock the Queensway section, and services to Happy Valley resumed on October 14.

But it said the occupation of Yee Woo Street in Causeway Bay had left 50 vehicles unable to return to the main repair depot in Whitty Street, Western District.

Contingency measures introduced yesterday allow part of the maintenance work to be done at a secondary depot in Sai Wan Ho.

The measures include using crane-equipped trucks to transport tram bogies to the Whitty Street site for detailed maintenance before carrying them back to Sai Wan Ho for installation.

Senior engineering manager Steven Chan Shih-Yao said the company had prepared for the move for 10 days, and that the work cost about HK$200,000.

Vivant said the company had lost up to 55,000 passengers a day since the Occupy movement started in late September.

Before its Admiralty section reopened, the company was losing 45 per cent of its passengers, but this had been trimmed to 25 per cent, he said.

“Hong Kong Tramways pledges that safety will not be compromised in its effort in maintaining the best possible services,” its statement said.

It took until 15 December 2014 for tram serves to return to normal, when police cleared the final protestors from Yee Wo Street between Percival Street and Causeway Road.

Some more footage of the altered workings at the Victoria Park crossover in Causeway Bay can be seen in this video by ‘mtrA381382’.

Given the length of the Hong Kong Tramways route, only eight crossovers exist on the network, as listed on the Chinese-language ‘HK Rail’ Wikia site:

All normal termini on the Hong Kong Tramway network are balloon loops or ‘around the block’ tracks – as seen in this track diagram from 1996.