On December 28, 2014 the new West Island Line of the MTR opened, extending the existing Island Line to the western end of Hong Kong Island at Kennedy Town. Along the way are two intermediate stations – Sai Ying Pun and HKU – which both feature something new on the rail network of Hong Kong: ‘lift-only entrances’. 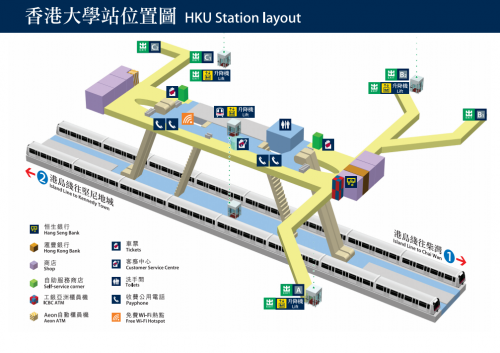 Across the Hong Kong MTR network escalators and stairs are the standard method of access to station concourses and platforms, due to their high passenger carrying capacity, with lifts having been provided in later years to cater for people with limited mobility.

However in the case of the new West Island Line stations, the steep slopes of Hong Kong Island make this difficult – HKU station is 70 metres below ground at the University of Hong Kong exit:

With Sai Ying Pun station also having a planned exit on Bonham Road, located on a hill 50 metres above the station. 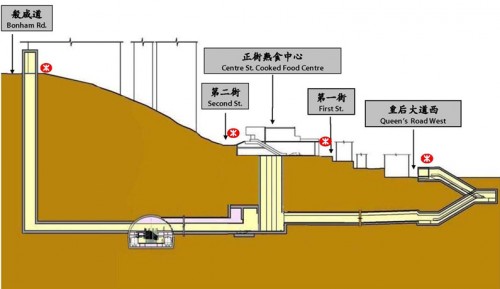 The world’s deepest metro station is Arsenalna (Арсенальна) on the Kiev Metro in Ukraine – at 105.5 metres below ground it has two flights of escalators linking the platform to the surface – so the depth itself wasn’t an unsolved problem.

However back in Hong Kong, the MTR took a different approach to their deep level stations: high-speed lifts. Their media release from November 2014 has the following to say:

At HKU Station, a total of 12 lifts have been installed in the unpaid area to connect the station concourse level with Pok Fu Lam Road and the University of Hong Kong. At Sai Ying Pun Station, eight lifts will serve the Bonham Road and First Street/Second Street entrances.

They go on to explain how the lifts will cope with the large number of passengers expected to use the station:

To ensure a smooth flow of people, each lift at the Lift-only Entrances is designed with doors on two sides, one for users to enter and the other for exit. Special queuing arrangements will be implemented with clearly marked lift positions and queue lines.

As well as the safety features fitted to the lifts, allowing them to be used for the evacuation of the station during a fire or other emergency:

The Lift-only Entrances feature enhanced designs from normal lifts including:

Following a media tour of the new HKU station, the South China Morning Post wrote of the safety features:

Passengers in the MTR’s biggest and deepest underground station will evacuate to “refuge areas” in case of fire, the corporation said yesterday as it insisted facilities on its new West Island Line were safe.

The company’s head of operations, Francis Li Shing-kee, said each lift could carry up to 28 passengers to the surface in less than 30 seconds and would also be used for evacuation in case of fire.

He said passengers would be directed to “refuge areas” to take the lifts, one level above the concourse, in case of emergency.

“The passengers are pretty much safe once they enter the refuge area, because the area is covered with fire systems like sprinklers and it is pressurised,” Li said, adding that passengers could either choose to take the lifts to the ground or use an emergency stairway.

Fire curtains will also drop down automatically to cover the lifts’ doors to stop the spread of smoke and the lifts have two independent power supplies to enhance their reliability, the MTR said. There are also designated refuge points for disabled people.

Li said the shelter design and use of lifts for evacuation were the first of their kind in the MTR’s network, and that they had met all the government’s safety requirements.

Drills were also carried out to familiarise staff with the emergency procedures.

The MTR Corporation uploaded this video to YouTube to describe how the lift-only entrances work, as well as showing off the emergency refuge areas.

At concourse level each lift lobby there is a dedicated queuing area. 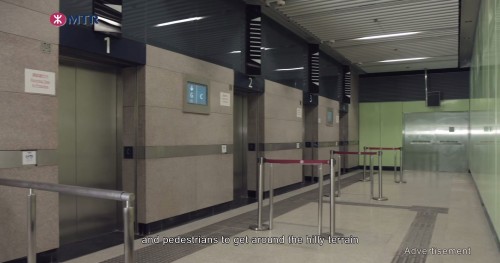 Each lift has two sets of doors, with the ‘exit’ set opening before the ‘entry’ doors in order to enforce a one way flow of passengers.

The staircase leading to the emergency refuge area is found behind the lift lobby.

Passengers head up the stairs to the smoke and fire proof room. 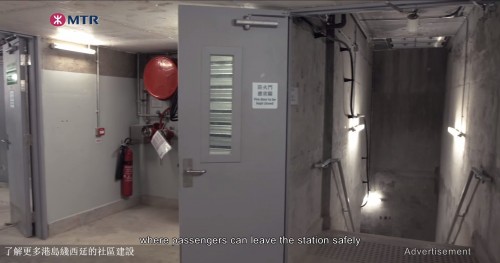 Passengers can wait in safety for the next lift to arrive, to take them back to the surface. 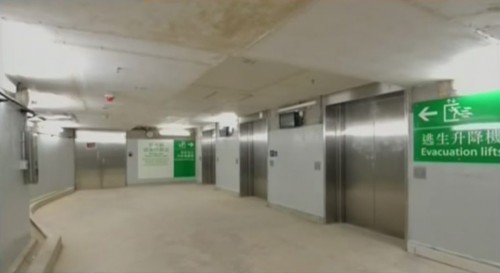 The alternative route is 12 floors of stairs! 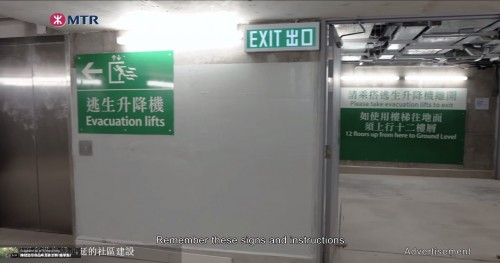 The same lifts serve both the station concourse and the refuge area, as can be seen by the buttons inside the lift.

Building emergency refuge areas would have been an expensive exercise, but was required by government regulations – passengers evacuating a smoke filled station can’t just stand around waiting for a lift back to the surface! Instead, the refuge provides a safe place for the crowds expected to be inside the station to wait, allowing them to slowly make their way out of the station via the lifts over an extended period of time.

Since HKU Station serves a busy university campus, seeing large crowds isn’t something completely unexpected. However this video from January 19, 2015 shows some very long lines to access the station.

Given that it shows the first evening rush hour of the term, it raises a question: will the lifts cater for the expected number of passengers in rush hour, or are the queues just teething troubles caused by commuters not yet familiar with the new arrangements?

As did the Chinese-language Now TV:

However if you are still feeling confused by the lift-only exits, this video from HKU station shows you them from concourse to surface.

This brochure on the lift-only entrances has been released by the MTR – as a 26 MB PDF document.

The MTR media release from November 2014 included a fact sheet detailing the specifications of the lifts at each station:

The use of smaller lifts at exit A1 and A2 at HKU seems curious – perhaps there were space constraints due to the larger number of lifts fitted in the shaft?