If you haven’t seen a ‘time-scale’ map of a transit system before, they are an interesting concept – instead of displaying every line and station in a way that makes it each to navigate from point A to point B, they allow you to compare how long it takes you to reach point A from points X, Y and Z.

Over on Reddit, there are two different versions shared to /r/HongKong – both the creation of a Redditor by the name of carpiediem.

The first diagram looks like a tree, with each MTR line radiating out from Central station on Hong Kong Island, with the distance between Central and every station indicating the travel time required to reach it. 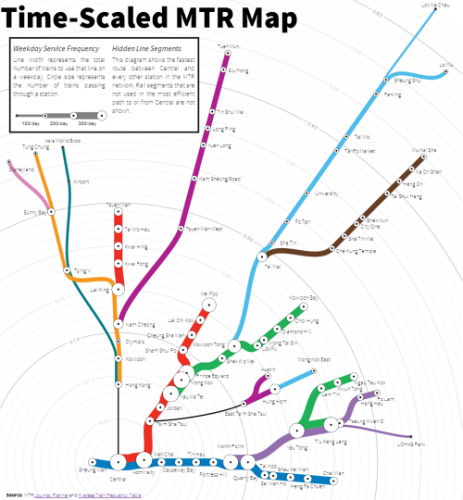 The second version illustrates the same data, but with the lines running parallel to each other, instead of branching. 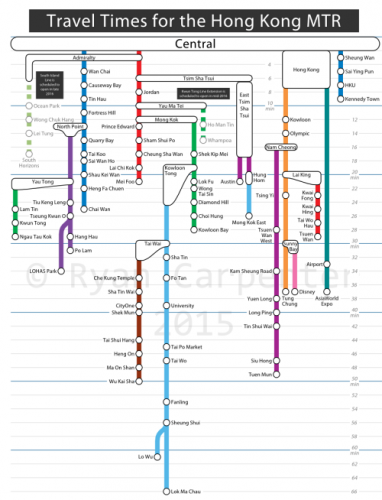 Both diagrams plot the same data, with the journey time data for each station having been pulled from the MTR website.

Some points regarding the diagrams:

And a final note – the above time-scale diagrams only apply to journeys starting or ending at Central station. In order to compare travel times from any other station, a completely different map will need to be drawn for each and every one. This is due to the Hong Kong MTR network forming a complex mesh, which means calculating the fastest route from point A to points X, Y and Z isn’t a process that can be automated easily.

The first place I saw time-scale network map concept was the Boston T-Time diagram – it was created back in 2012 by Stone Brown Design.

A related style of diagram that links travel time to geography is a isochrone map – “a line drawn on a map connecting points at which something occurs or arrives at the same time”.

1 Response to Time-scale maps of the Hong Kong MTR