I’ve visited Hong Kong a number of times with my father, and every time he talks about Nathan Road (the main street of Kowloon) I hear ‘Leighton’ instead of ‘Nathan’ – leaving me horribly confused until I realise what he is actually saying. So why is an apparently simple street name so complicated? 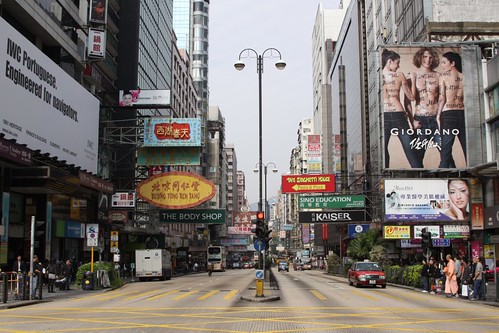 The Center for Language Education at the Hong Kong University of Science and Technology has this useful fact sheet on how native Cantonese speakers mispronounce English words:

This leaflet provides information on why pronunciation problems may occur and specific sounds in English that Cantonese speakers may have difficulty with.

Pronunciation problems happen when speaking a second language because most people are used to hearing and making sounds which only exist in their mother tongue.

The particular sound that causes the ‘Leighton’ / ‘Nathan’ confusion is the [l] consonant:

/l/ and /n/ both exist in Cantonese at the beginning of words but in Cantonese you can use both sounds for the same word without changing the meaning. You can, for example, say the word for ‘you’ in Cantonese using either the /l/ sound or the /n/ sound. If you do this to English words you get a different meaning. If you change the word: ‘light’ to ‘night’, the meaning is quite different. It’s important therefore to be careful of this when you speak English. The main difference between /l/ and /n/ is that, in making /l/, air escapes through the mouth, but in making /n/, air escapes through the nose.

Merging the /l/ and /n/ sounds when speaking Cantonese is also a thing, but is considered a “lazy sound” by traditionalists.

Some history on Nathan Road

Nathan Road was the first road built in Kowloon, with the first section completed in 1861. It was originally named Robinson Road, but to avoid confusion with the road of the same name on Hong Kong Island, in 1909 it was renamed in honour of 13th Governor of Hong Kong Sir Matthew Nathan.

This entry was posted in Everyday Life and tagged Hong Kong, Kowloon, lost in translation, Nathan Road. Bookmark the permalink.