The other week I was having a Facebook conversation with a friend when they posted something very familiar looking – the former Kowloon-Canton Railway clock tower! 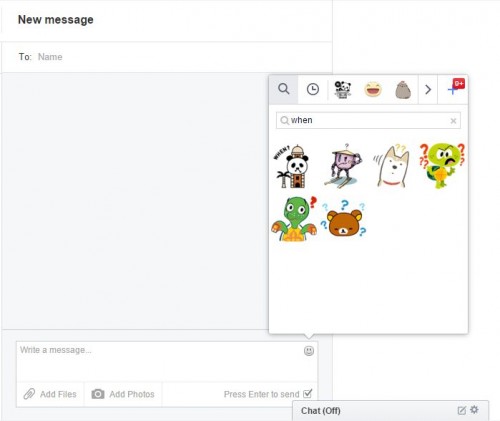 Here is a closer look – the images are called ‘Facebook Stickers‘.

So why was the KCR Clock Tower available as a chat emoticon in Facebook, and why did it feature a panda asking “when”?

Eventually via Google, I found the answer – Facebook created a set of 23 specially drawn icons to mark the June 2014 “1600 Pandas Tour” of Hong Kong.

1600 Pandas are en route to Hong Kong! After ruling France, the Netherlands, Italy, Switzerland, Germany, Taiwan and nearly 100 exhibitions, 1600 Pandas has landed Hong Kong for the first time today. This world tour was launched in 2008 by WWF and acclaimed French artist Paulo Grangeon, who crafted 1600 pandas – the number of living pandas left in the wild – in various sizes with recycled materials in the form of paper mache.

From 9 June onwards, the pandas will leave their footprints on Hong Kong. They will grace more than 10 Hong Kong landmarks and help promote the city’s creative industry by fostering an interactive, imaginative and sustainable environment where humans and nature coexist. The 1600 visiting pandas will come in six different shapes and sizes, with four more one-of-a-kind paper mache versions specially created by Paulo Grangeon for his visit to Hong Kong. All proceeds will be donated to WWF Hong Kong for conservation and education work.

More photos of the 1600 Pandas Tour can be found at alvinology.com.