Finding photos of the early years of the Hong Kong MTR is a little tricky, but here is a photo of Tai Koo Station soon after opening in 1985. 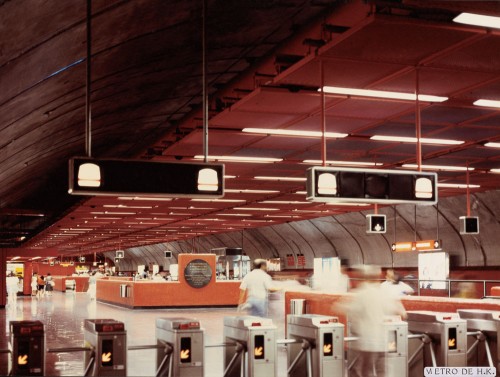 Built by Dragages Hong Kong, they have more to say on their involvement with the project:

The expansion of the MTR system through the Island line was necessary to accommodate the increased demand for housing and commercial space on the Island as economic development hit high speed in the 1980s. The Tai Koo twin tunnels and station were located at the eastern end of the line to serve the increase in demand from the nearby developments. The works comprised twin tunnels and a station built in a 24-metre span rock cavern.

In the years since the turnstiles and overhead signage has changed, but not much else.