The closure of Hong Kong’s Kai Tak Airport in 1998 and the overnight switch to the new airport at Chek Lap Kok always intrigued me – how did they manage such a massive move? 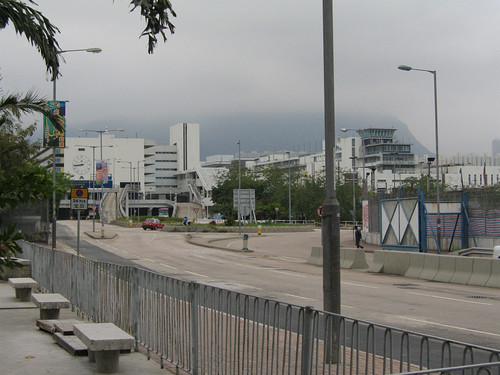 From the Wikipedia page on Kai Tak:

The new airport officially opened on 6 July 1998. All essential airport supplies and vehicles that were left in the old airport for operation (some of the non-essential ones had already been transported to the new airport) were transported to Chek Lap Kok in one early morning with a single massive move.

On 6 July 1998 at 01:28, after the last aircraft departed for Chek Lap Kok, Kai Tak was finally retired as an airport. The final flights were:

A small ceremony celebrating the end of the airport was held inside the control tower after the last flight took off. Richard Siegel, then director of civil aviation of Hong Kong, gave a brief speech, ending with the words “Goodbye Kai Tak, and thank you”, before dimming the lights briefly and then turning them off.

For the night of the transfer, the Hong Kong Police Force requested that the general public stay away from Kai Tak and Chek Lap Kok airports.

Police call on members of the public to stay away from Kai Tak and Chek Lap Kok airports and nearby areas during the crucial phase of airport relocation from next Sunday (July 5) till the following day.

During the move scheduled to start at 5.30 pm on July 5 until 6.30 am the following day, some 1,200 vehicles will be relocating on roads linking the old and new airports.

Chairing a press conference today (Friday) on the traffic arrangements and road closures for the relocation of the airport on Sunday, Senior Superintendent, Operations, Mr Fung Kwok-on, said the move was a major operation that needed to be completed with a frame of tight time.

Superintendent, Operations, Mr Steve Wordsworth, who has co-ordinated this operation noted, “This is a working event with no provision for spectators.”

To maintain the operations of Kai Tak Airport whilst allowing the relocation to proceed, Police officers on the ground will perform traffic and crowd management duties.

Mr Wordsworth advised people not to turn out to watch the relocation as their presence would possibly delay the move.

“Other members of the public are advised to keep away unless they have legitimate business at the airport,” he stressed.

With road closures put in place along two transfer routes.

The following traffic arrangements will be implemented in the vicinity of Kai Tak at the commencement of the relocation on July 5 night.

A section of Concorde Road to the east of the Passenger Terminal Building, Eastern Road and Cargo Circuit, will be closed to facilitate relocation from 5.30 pm on Sunday.

Meanwhile, the upper two floors including the rooftop of Kai Tak Airport Multi-storey Car Park will be closed to the public including pedestrians starting from 7 am. People intending to travel to Kai Tak by their own vehicles should note that parking will be limited.

The Southern Route, from To Kwa Wan Road, Sun Shan Road, East Kowloon Way, Gascoigne Road, Jordan Road to Route 3, is required for certain slow moving vehicles and as a fall-back in the unlikely event that the Northern Route is completely blocked.

Special road closures on the Northern Route will be implemented from 10 pm on July 5 as follows:

A section of the Northern Route – westbound Lung Cheung Road from Choi Hung Interchange and onto Ching Cheung Road will be closed to traffic. Only relocation traffic and franchised buses will be allowed on the route.

The closed roads will be reopen to the public at about 6 am on July 6.

On the New Territories side, lane closures on Route 3 in the vicinity of Kwai Chung, across the Tsing Ma Bridge and North Lantau Highway will be implemented to facilitate the relocation traffic.

The viewing platform of the Tsing Ma Bridge will be closed in the evening of July 5.

As regards access to the new airport at Chek Lap Kok, the roads to the passenger terminal building will open to the public at about 2 am on July 6.

The primary transfer route passed to the north of Kai Tak Airport beneath the Kowloon Hills, while route to the south passed through busier urban streets.

On the day of the move, the New York Times published a piece on the epic transfer.

It is not the first time a city has switched airports in a one-day move – Denver and Munich, Germany, did it. But no municipality has attempted to do it on quite the same scale or with the same bravado as Hong Kong.

Starting at midnight, when the last plane took off and the runway lights at Kai Tak Airport were switched off, a convoy of 1,100 vehicles began rumbling out of the airport and on to residential streets in Kowloon toward Hong Kong International Airport, which is built on reclaimed land off Lantau Island.

But for the people working on the move, this was no time for nostalgia. At a dock next to the runway, cranes were busy hauling baggage loaders, pallet pushers, and other assorted airport vehicles on to 14 barges, which later steamed through Victoria Harbor to the new airport. Thirty-one passenger planes transported still more equipment from the old airport to its giant successor.

And what of the person who was supervising this vast movement of men and materiel — an operation the local government has been promoting for weeks as “The Night” and regularly compares to D-Day?

“It’s all in the planning,” said the Police Superintendent, Steve Wordsworth, as he monitored the beehive of activity on a bank of television and radar screens from his airport command center. “Panic doesn’t help.”

A stout, balding 38-year-old with an easy manner, Superintendent Wordsworth said he had been planning the move for 18 months. The Airport Authority recruited a retired British Army colonel with experience in logistics to advise him. And it held a full-dress rehearsal, with 40 vehicles, on April 29.

Still, Superintendent Wordsworth admitted his ice-water-in-veins demeanor was a bit of an act. The move posed immense logistical challenges: a crowded winding route, a tight timetable and sporadic heavy rain. And the new airport could not open without the equipment from the old one.

“You’d think I was calm, cool, and collected, but look at my nails,” he said with a chuckle, offering up a set of well-chewed cuticles.

While the 1999 edition of The Arup Journal covered the relocation of the LSG Sky Chefs catering facility.

Decommissioning and planning the move to Chek Lap Kok began in summer 1996, with Arup commissioned to start the process with LSG’s Project Director. The Airport Authority held the first operational readiness meeting and the move in summer 1997.

Initial plans were drawn up to reflect first estimates of volumes to be moved and how – by land, sea, or air. Sea was deemed too slow, and unnecessary as its domain was largely for large bulky objects. Air was a viable alternative to land: one of LSG’s clients could fly the facilities contents to CLK from Kai Tak as part of their overnight placing. However, flexibility was crucial – the planes’ timetable was unlikely to coincide with LSG’s window (much larger) and the state of airside access at CLK was unknown.

Initial 1997 estimates had assumed around 250 6.1m containers worth of equipment requiring to be moved, but further surveys showed this to be slightly high and the plan was reduced to 220 6.1m or 110 12.2m containers.

An initial night trial, carried out on 5 May using one container and loading from the third floor equipment store, showed lift availability and reliability to be crucial to the move’s success. A second, daytime, trial one week later using two containers was much better; the one-hour loading target was achieved with no disruption to operations. This proved the practicality of daytime removal operations, and two time slots at 10.30am and 3.00pm were identified.

The first major move, over the 21 June weekend, was the administrative offices. Friday night was occupied with packing, and Saturday with the move itself (five containers and three lorries). On Sunday the desking was assembled and LSG staff unpacked their belongings.

This left just under 50% of the equipment to be transported on the Sunday night and in the week thereafter.

25 containers were planned for the Sunday move, each with its own time slot and planned contents. Planning the Sunday move was concentrated and dictated by Kai Tak’s Arrivals schedule.

Dishwashing was planned to stop after the 1.30 flight had come through, giving the team time to get to CLK before the first of the arriving dirty carts followed them across – in containers or LSG hi-lifters, whichever were available. By doing this, the facility could be closed earlier rather than wait for all flights to be washed and then transported. As flights arrived, they were loaded directly onto the containers, on the ground floor if possible, or stored temporarily on the first floor and moved down using lifts or any spare hi-lifter.

By 1.15am Monday the last container and hi-lifter had left. A total of 32 containers had been loaded since 12.00 noon Sunday, averaging 20 minutes a container. The last hi-lifter arrived at 2.15am Monday on the back of a breakdown truck, having ground to an unplanned halt just outside CLK.

Following the night move, nine more containers and seven frozen food trucks finally cleared the last of Kai Tak. The building was decommissioned by 22 July 1998, not quite two years from the first stages of planning to final shutdown.

Staff on the night: 16 in Kai Tak, 25 at CLK, plus various LSG management.

Finding photos of the last day at Kai Tak was a difficult task, but I came across this footage from the Associated Press archives.

Airport official: “The last passenger has arrived the last flight has departed, the runway is quiet – it is now time to turn the lights out that have safely guided thousand of planes…Goodbye Kai Tak and thank-you”; clapping;

I also found this set of photos published by the South China Morning Post that look back at the transfer from new to old. 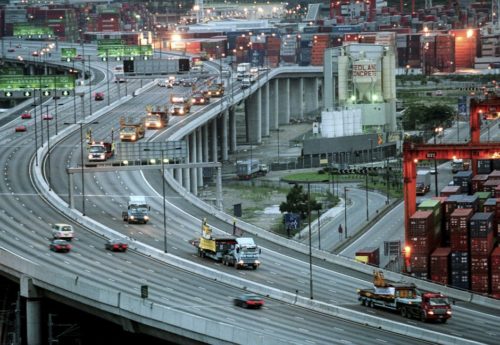 After closure, the Kai Tak terminal and airport control tower lay idle – on my visit to Hong Kong in March 2004 they were still there. 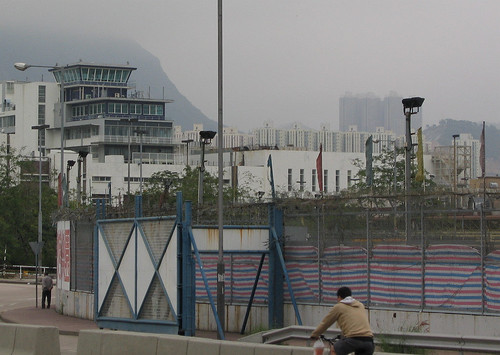 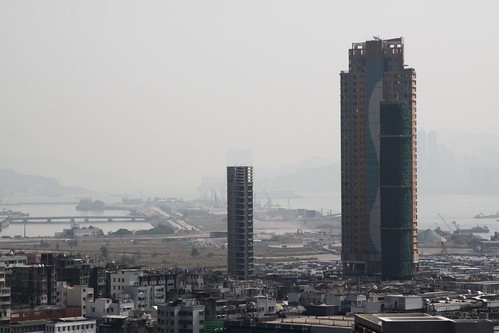