The “Intercity Through Train” service links Hong Kong to mainland China, running express across the border from Hung Hom station. Jointly operated by the MTR Corporation of Hong Kong and the Chinese Ministry of Railways, these trains are normally hauled by electric locomotives. However the MTR fleet of diesel locomotives is occasionally found up front of these trains, on empty car moves to/from the railway workshops. 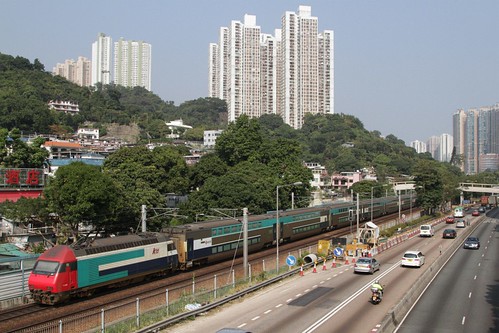 The double deck KTT train set is usually hauled by a pair of electric locomotives in push-pull formation, but can be hauled by a single unit when maintenance is required.

Here we see EMD G26CU diesel locomotive #61 dragging the empty KTT set out of the East Rail Depot at Tai Wai, bound for Hung Hom. Here the train entered service, headed northbound with a single electric locomotive in the lead, and the diesel left behind in Hong Kong.

Here is a complication of more MTR diesels on passenger trains:

China Railways trains into Hong Kong are usually hauled by a single locomotive.

But double headed trains occasionally cross the border into Hong Kong, such as this pair of SS8 electric locomotives in 2015.

And another SS8 electric with DF11 diesel double header in 2012.