For decades the Kowloon–Canton Railway was a quiet single track railway, with a handful of passenger trains heading along the line linking the villages of the New Territories to the urban heart of Kowloon. But the development of the New Towns during the 1970s saw the role of the railway change, which led to an interesting proposal – double deck passenger carriages.

It was intended for these new locomotive hauled carriages to replace the single deck carriages then used on the KCR, enabling more passengers to be carried per train, removing the need for costly track duplication or electrification works.

Photo via this blog.

In 1970 the executives of the British section of the Kowloon–Canton Railway began a radical rethink of the Railway’s future. A government steering committee was set up in 1972 to examine the changes needed to promote freight and passenger growth between Hong Kong and mainland China on their standard-gauge 35 km line from Kowloon and Shenzhen (on the Chinese border). It was intended to construct large new towns at Sha Tin, Tai Po, Sheung Shui and Fanling in the New Territories. These developments would significantly increase the daily commuter traffic on the KCR.

In 1972 KCR called for expressions of interest for high-capacity commuter trains to cope with this expected increase in traffic. Up to that time KCR trains were locomotive-hauled using diesel-electric units built by Clyde Engineering. The man in charge of the new rolling stock project was engineering manager Clement Chui, who came to Sydney in July to look at Comeng’s double-deckers. He was strongly in favour of double-deckers and so John Dunn was assigned to come up with the proposed train layouts.

There were three car types:

The latter car was also fitted with a packaged diesel generator unit to provide power for the lights and ventilation fans on the train.

This general arrangement diagram shows the layout of the proposed carriages. 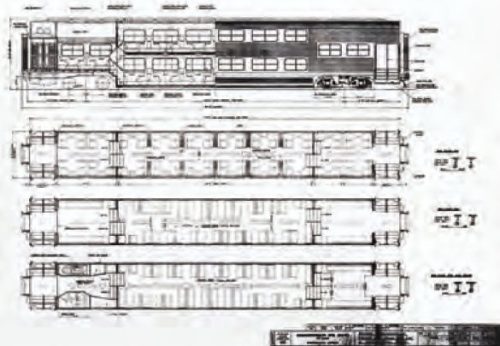 As you can see, the proposal from Comeng was similar to that of the double deck electric multiple unit trains built for the suburban railways of Sydney, Australia during the early 1970s. 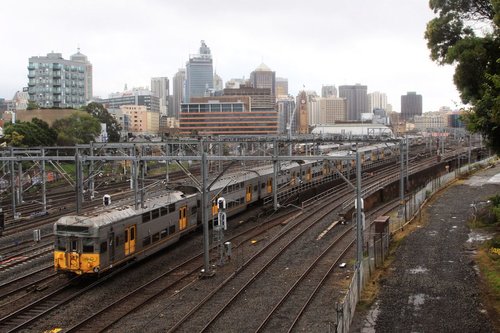 But a number of modifications were required to suit the local infrastructure:

Since there were no high platforms on the KCR at that time, the cars had to have doors at the ends with steps to give access to and from the low platforms. It was the first time this type of double-deck car had been conceived — the arrangement being necessary to avoid interrupting the load-carrying side sills along the bottom deck below the windows. Although many European double-deckers had doors giving access to the lower deck, this was not a proposition in this KCR proposal.

However the proposal came to nought:

The double-deckers never eventuated, even though Clement Chui recommended them and pushed hard for their acceptance. Because the KCR was a ‘British’ railway the decision-makers favoured the ‘old school tie’ and were keen to back the car builders in England rather than anyone in Australia. It is also probably true that since the British had no experience with double-deckers they opted for a type of train which had been tried and proven back home.

Instead a more conventional investment program was selected – double-tracking and electrification of the railway from Hung Hom to Lo Wu and the upgrading of stations with high platforms, served by a fleet of single deck EMUs built by Metro Cammell of the UK. This work was completed by 1983.