Every MTR station seems to be full of shops and other commercial services, but there is one thing that is often lacking – public toilets! 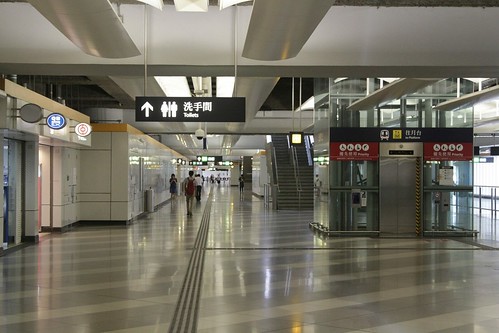 The reason for this goes back to the original design of the system in the 1970s.

Most MTR stations were built in the 1970s and 1980s. In view of the short travelling time and availability of public toilets in most commercial buildings or shopping arcades in the surrounding urban areas, public toilets were not a built-in feature for those MTR stations.

But the expectations of the travelling public have risen in the years since.

With continual expansion of the MTR system and taking into account feedback received from the public, the Corporation has reviewed from time to time the feasibility of providing toilet facilities at new stations for passengers.

So toilets started to be built at new stations.

In this regard, the Corporation has identified appropriate locations, after consulting the relevant Government departments, for building public toilets at street level near some of the new stations. These include toilet facilities built by the Corporation at Public Transport Interchanges at Hang Hau, Tiu Keng Leng and Tseung Kwan O stations of the Tseung Kwan O Line.

As regards the Airport Express Line, in view of the long journey for international travellers with luggage, public toilets were designed as a built-in feature at Hong Kong, Kowloon and Tsing Yi stations.

Similarly, for Disneyland Resort Line, in view of the fact that the Theme Park’s visitors would mostly be families with children, public toilets were designed as a built-in feature at both Sunny Bay and Disneyland Resort stations.

In 2007 the Legislative Council requested the MTR Corporation look at the retrofitting of public toilets at railway stations. A number of technical issues were raised:

This review resulted in three decisions:

As well as the MTR publishing a list of the nearest public toilets to each railway station.

What about the staff toilets?

In 2017 online media outlet Hong Kong 01 reported on the ‘staff only’ toilets at MTR stations.

When expressing to the staff that they need to use the toilet, The station staff took the reporter to the hidden corner of the station. After he opened a silver iron door, there was a “mysterious toilet” hidden in the interior. Generally, there were two or three toilet compartments! The staff explained that it is a toilet for staff of the MTR. If passengers need it, they can check with the staff.

Du Guangren, Chairman of the Employees Association of the Mass Transit Railway Corporation, explained that passengers can inquire the staff if they need it. According to their understanding, no matter which station is required to be led by the staff to use it; however, there are different security standards.

The MTR responded to “Hong Kong 01” inquiries and stated that there are a number of signs posted on the platform of the station and the control station outside the lobby, informing passengers that if necessary, they can ask the station staff to use the staff toilet inside the station.

The above quotes are all from a July 2007 report by the Legislative Council Panel on Transport titled ‘Provision of Public Toilets in MTR Railway Stations‘.

The lack of public toilets on the MTR system parallels the lack of disabled access to stations – thankfully that omission has almost been corrected, after decades of work retrofitting lifts to every MTR stations.