Changing tracks on the Shanghai Maglev

There has been plenty written about the Shanghai Maglev train and the magnetic levitation technology which allows to reach a maximum speed of 431 km/h on the journey from Pudong International Airport. But none of it covers the operational details of the line – how many trains, how they change tracks, and where there are maintained. So let’s go for a deep dive. 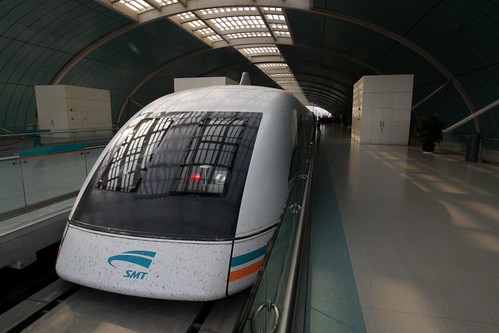 Construction of the line began in March 1, 2001 and cost $1.2 billion to build, with public commercial service commenced on 1 January 2004. During a non-commercial test run on 12 November 2003 a maglev train achieved a Chinese record speed of 501 km/h.

Each train is 153 metres (502 ft) long, 3.7 metres (12 ft) wide and 4.2 metres (14 ft) tall, and has a three-class, 574-passenger configuration. The train set was built by a joint venture of Siemens and ThyssenKrupp from Kassel, Germany and based on years of tests and improvements of their Transrapid maglev monorail.

The double track guideway was built by local Chinese companies, the double line being 30.5 km (18.95 mi) long with a separate single track leading to a maintenance facility. 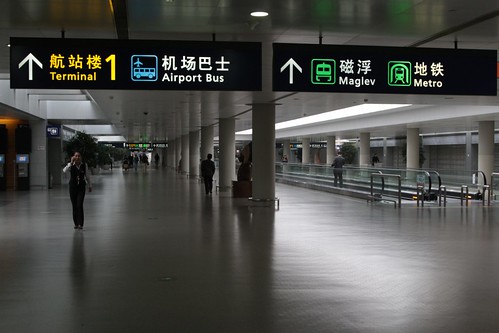 The maglev train is the fastest, as well as the most expensive. 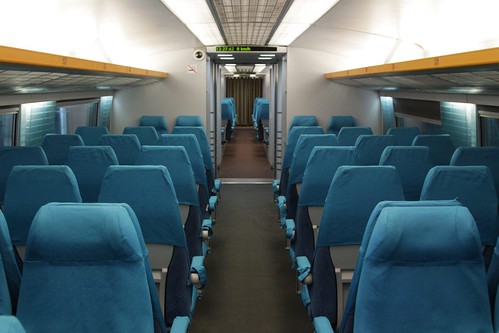 Speeding past both trains on the parallel metro line, and buses on the freeway. 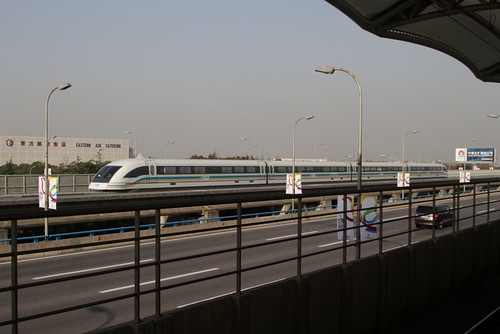 But it also means the front of the train is quickly covered with splattered bugs! 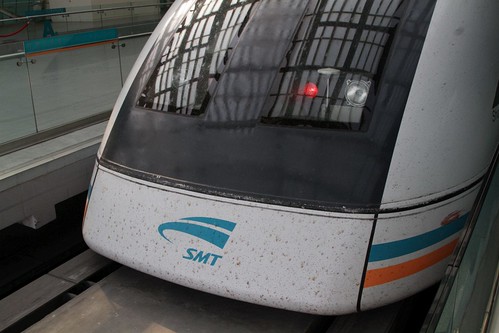 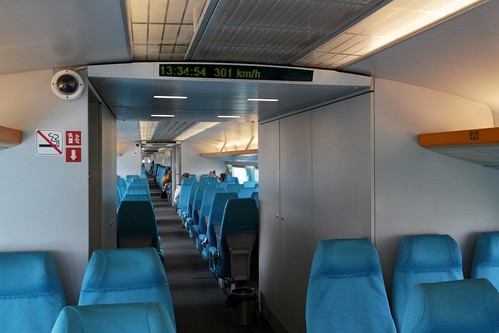 The slower speed is to save power, which makes sense given the massive amount of electricity needed to accelerate the train from a standing start for such a short journey.

My first question was how the maglev trains change tracks. At the approach end to Longyang Road station I noticed a crossover, but I never saw it get used. 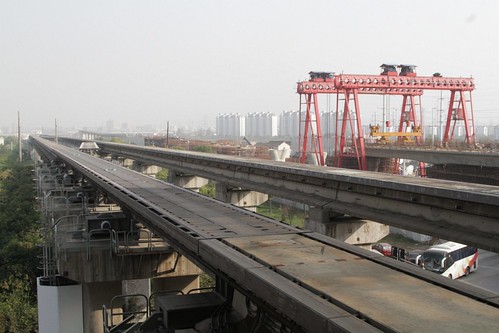 The crossover is even more noticeable head on from the central platform. 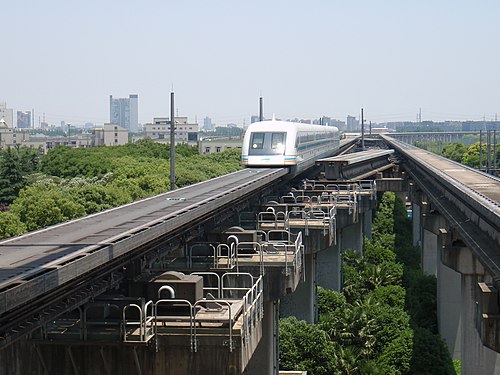 Photo by Raki_Man, via Wikimedia Commons

As well as overhead via Google Maps. 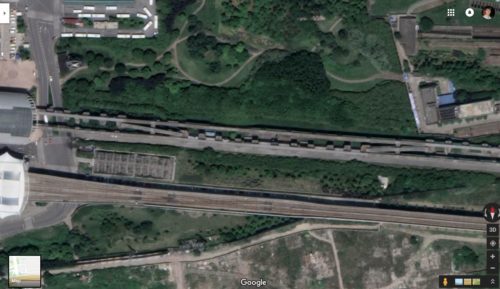 But I finally got somewhere when I found this video by Luke Starkenburg, showing the crossover in use.

He also provided an explanation as to why I didn’t see it in use.

I shot these scenes back in 2006 when the Shanghai Maglev used the switches in daily operation, when two trains were providing the regular service, with a third spare train. The trains used to change tracks in a ‘pinched loop’ system.

Today, the maglev uses two trains running on their own dedicated track all day, with the switches not used in regular operation, except in the morning and evening to put the trains away in the depot.

On to the maglev depot

On my maglev journey I noticed a single track veer away from the main alignment, just north of Pudong International Airport. 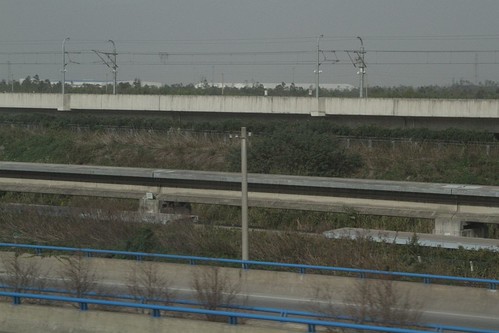 It climbed above the parallel freeway, then headed back to ground level. 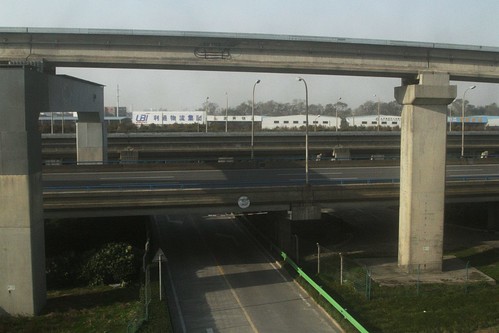 Scrolling around on Baidu Maps I eventually found where the track connected back to the main line. As well as how it crosses the freeway. So where did it lead to? I found the answer via this track diagram on Wikipedia.

Turns out the track led to the maintenance facility, which looks like just another blue roofed shed from the air. 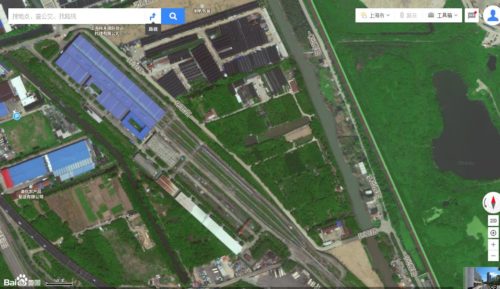 But the main entrance has a big “Shanghai Maglev Transportation Development Co Ltd” sign over the top. 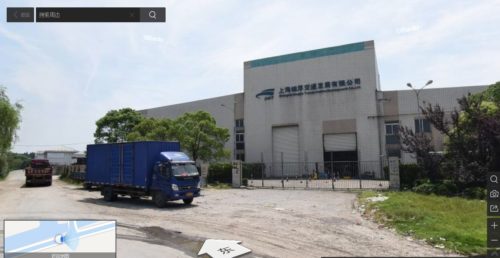 And a maglev track entering from the southern side. The single track splits into three before entering the shed. A better view of the facility appears in this 2002 article by Sina News showing the first test train. 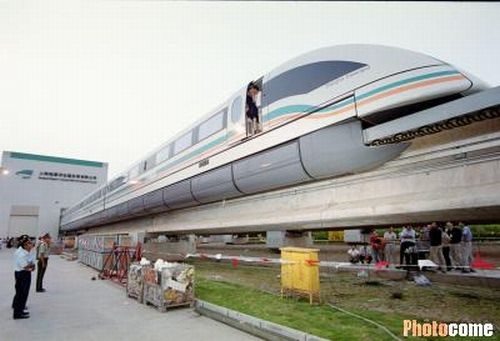 While the three-way junction can be seen in this uncredited photo of a 3-car long train outside the depot. 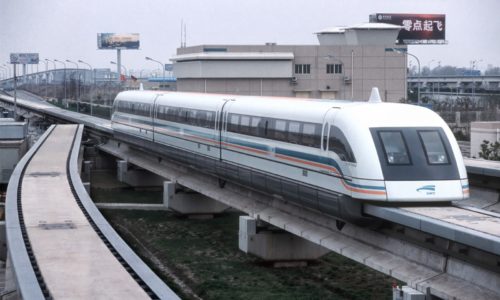 And a hidden crossover

Turns out there are more junctions than just the crossover at Longyang Road station, and on the single track branch to the depot – while following the maglev guideway on Google Earth, I found another crossover track, located on a turnback siding south of the Pudong International Airport terminus. Hidden away in the middle of a freeway median strip, I had no luck finding a ground level photo of the turnback track.

With my virtual exploration of the network complete, here is a complete track layout diagram for the Shanghai maglev.

Note that the station at Pudong International Airport has conventional ‘side’ platforms, while Longyang Road has an extra island platform in the middle to separate arriving and departing passengers.

And a footnote on train length

This 2003 article by Sina News describes the delivery of the maglev trains to Shanghai.

Yesterday two maglev trains carried by China Shipping Group aboard the ship “Taigu” docked at the Port of Shanghai, and will wait for assembly and commissioning. At this point, the number of maglev trains in Shanghai has increased to seven.

After the maglev train is officially put into operation, a total of three trains are required, running back and forth on the double track. Each train consists of 5 cars and can carry more than 400 people.

A pair of five-car trains can also be seen in this undated photo, but on my 2013 visit I only saw four-car trains.

While this undated photo includes a three-car train.

So this just raises more questions – maybe the first test trains were only three cars long, then extended to five cars, until the 2006 fire resulted in the scrapping of some carriages, and the remarshalling of the remaining fleet into three shorter trains?

Luke Starkenburg also has fantastic lineside views of the Shanghai maglev on his YouTube channel – from January 2014.

9 Responses to Changing tracks on the Shanghai Maglev