Since the 1970s the Mass Transit Railway network has expanded to cover much of Hong Kong, but at Kwu Tung in the northern New Territories there is something different – a ghost station that has no trains stopping at it. 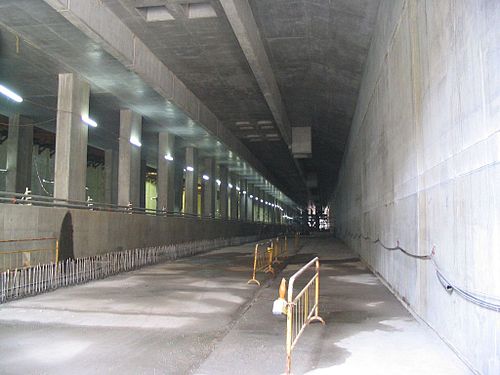 Named Kwu Tung (Chinese: 古洞站) the station was built as part of the Lok Ma Chau spur line project of the early 2000s, which extended the East Rail Line via a mix of tunnel and viaducts to an additional border crossing at Lok Ma Chau. 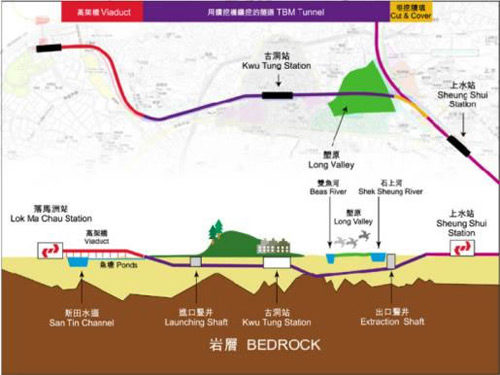 As part of this project it was decided to build provision for a future station at the midpoint of the tunnel, to serve the Kwu Tung New Development Area. 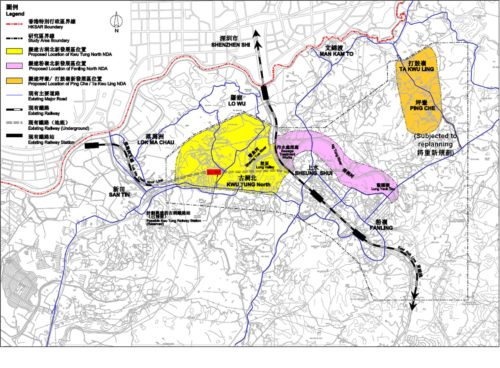 This required some additional engineering works while building the tunnel.

A box for the future Kwu Tung station will be constructed using diaphragm walls excavated to rock head. The box may be excavated before the TBM passes through, or after the TBM has passed through, in which case the precast lining units will be removed during excavation. Bored piles will be driven concurrent with the diaphragm wall to provide the basis for the future station construction.

Break out and break in ground treatment will be required to enable the TBM to enter and exit the station box safely and without wall collapse. Even if the TBM drives through the area before excavation on the first drive, it is likely to pass through an excavated box of the second drive. A temporary floor slab will be required to be constructed below the level of the second TBM drive and it will need to incorporate a suitable ‘bedding” on which the TBM can pass over.

With the station box requiring additional support during the construction process. 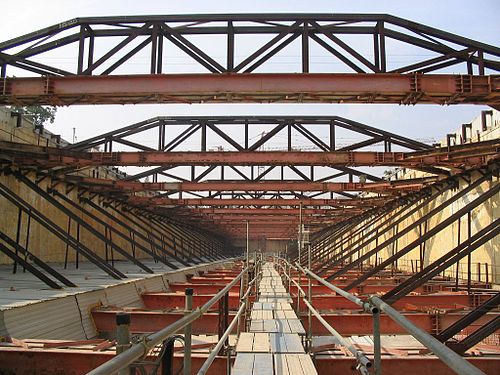 The 2007 edition of The Arup Journal covered the construction process.

To minimize capital costs, only minimum provisions were constructed under contract LDB201 , sufficient to allow the future construction of the station without disrupting the operating Lok Ma Chau railway.

The provisions for Kwu Tung include only the lowest level of the station, which initially will house the running tunnels, and in the future will form the station platform level. This was built within temporary diaphragm walls as an in situ cut-and-cover box, and backfilled up to existing ground level. The excavation was designed and constructed on a very fast track programme in 11 months, so that the base slab was in place before the first TBM drive reached Kwu Tung. This required very close collaboration between the design, construction, and supervisory teams. 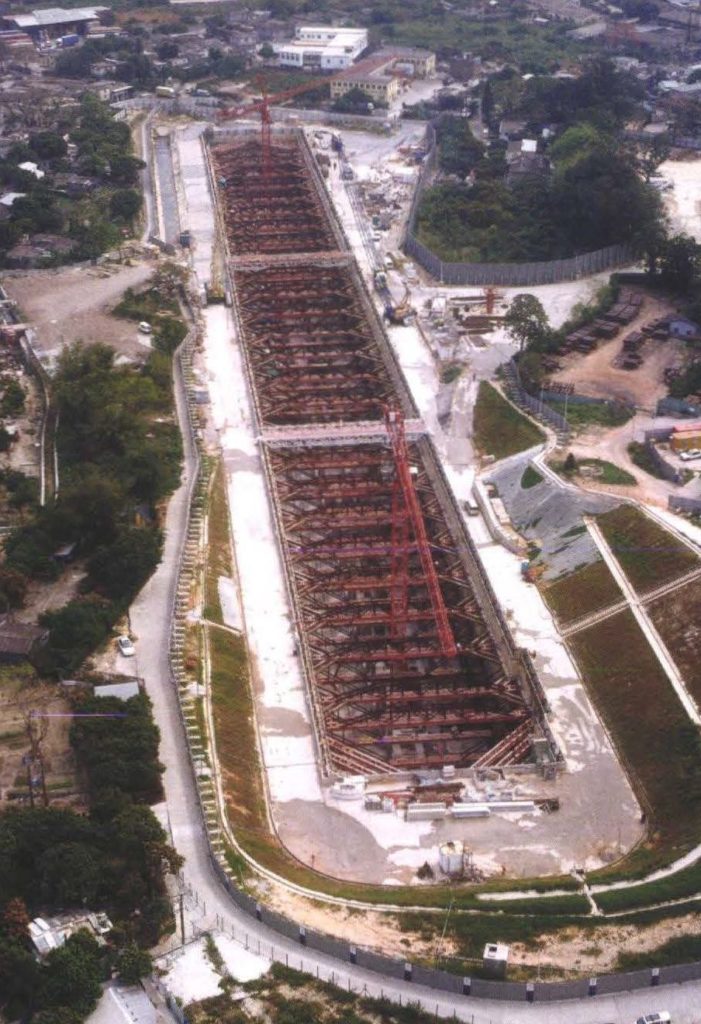 Arup planned and sized the station, using KCRC’s planning criteria and data, as an island platform configuration – well suited to the separated twin TBM tunnel bores. Two rows of in situ columns support the roof slab, which in the future will become the concourse floor structure.

To minimize disruption to the operating railway, the station box has been preplanned and constructed with several permanent provisions that will allow the future station to be safely and efficiently constructed with minimum effect on the permanent structure. 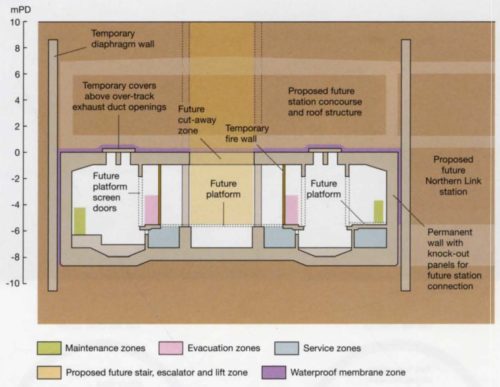 In this initial stage, the station box operates as two distinct and separate tunnel tubes some 10 metres apart. To form the inner walls of these discrete tubes, fire-rated Durasteel panels on steel frames have been erected off the platform edge strips.

Since the station will not support future property development, the structure could be designed as ground bearing on the completely decomposed tuft material without need for piles. Pairs of temporary columns were also constructed to provide support to resist the considerable weight of soil on top of the roof slab.

The roof was then built over the top, and grass planted. 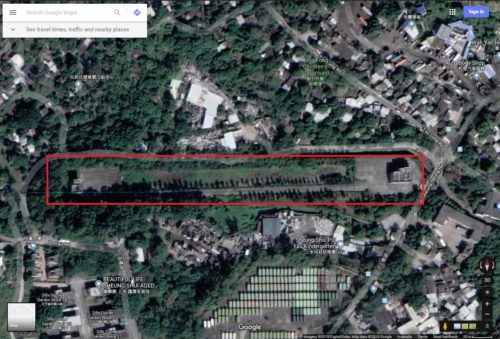 Today two buildings mark the site – “Emergency Passage No. 3 and No. 4” – providing ventilation and emergency exits to the tunnel below. 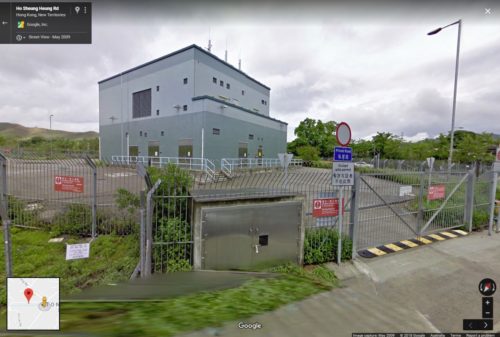 The Hong Kong government’s Railway Development Strategy 2014 includes the Northern Link and Kwu Tung Station as a future expansion of the rail system. 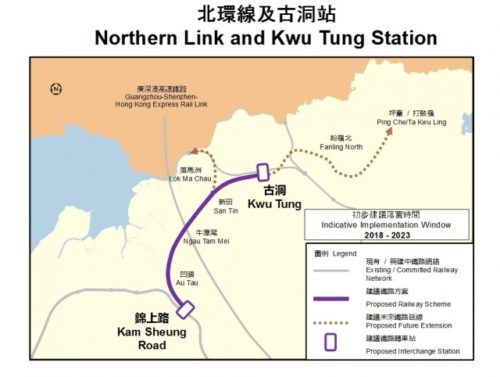 With the 2007 edition of The Arup Journal covering the works required to turn Kwu Tung into a ‘real’ station.

In the future it will be necessary to re-excavate down to the roof of the running tunnels, build the concourse level and ground level structures, and then fit out the platforms at the lowest level. The temporary diaphragm walls built for the initial construction have also been designed so that they can be used to support the excavation for the future station construction . The temporary columns at platform level will be removed as concourse construction proceeds.

Due to the station being being separated from the tunnels by fire-rated Durasteel panels, the future station contractor will be able to carry out and complete all platform construction including ABWF (architectural builders works and finishes) and building services inside a safe, fire-rated enclosure, prior to dismantling the wall in order to install platform screen door and final platform edge works.

Provision has also been made for the future Northern Link station to be constructed alongside the Lok Ma Chau spur line station. To avoid any disruption or compromise to railway operations, a strip of future platform slab was built on the north side of the station box, serving initially as a maintenance walkway. Knock-out panels have also been allowed for through the perimeter wall for future cross-platform interchange.

Construction of the Northern Link was expected to commenced in 2018 with the line opening in 2023, but no progress has been made so far.

More photos of Kwu Tung station under construction can be found at the Hong Kong Place website.