How does the Peak Tram cross in the middle?

Hong Kong’s Peak Tram has two tramcars, but only one track – so how do they pass each other on the way up Victoria Peak? 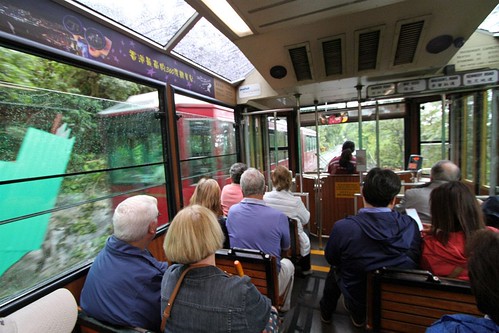 The Peak Tram is a funicular system with two trams in operation at all times, balancing each other on a single haulage cable that leads from the winding house at the top of the incline. The cable means both trams move at the same time, one moving upwards, the other downwards.

There is only one track at the bottom station. 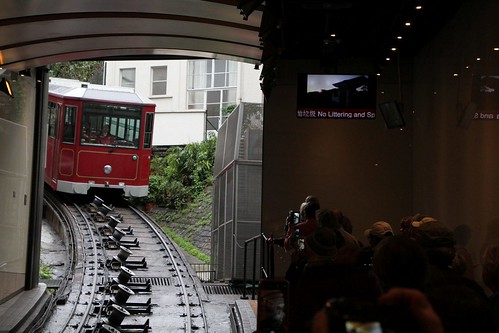 And a single track at the top. 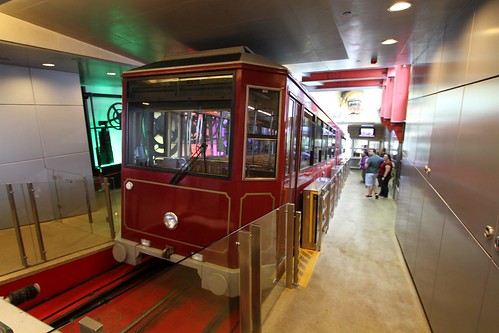 But the magic happens in the midpoint of the incline, where there is a passing loop.

So how does the passing loop work?

There are three different ways to build a funicular railway:

Two parallel straight tracks, with separate station platforms for each vehicle. The tracks are laid with sufficient space between them for the two cars to pass at the midpoint. Conventional rail wheels are used.

Two parallel tracks, spreading apart at the midpoint to allow trains to pass, but with a shared rail elsewhere to save on materials and space. Conventional rail wheels are used.

Two interlaced tracks, spreading apart at the midpoint to allow trains to pass, but shared elsewhere to save on materials and space. Special double-flanged wheels are used, to pass through the special pointwork installed at each end of the pointwork.

The American Society of Mechanical Engineers explains the genesis of the two-rail funicular design.

Carl Roman Abt described the “automatic turnout” solution he used at Giessbach in a sequence of very detailed articles published in 1879.

This arrangement made passage over the turnout automatic. Abt’s design also required additional guidance slips, and the upper and lower switches had to be different.

However Abt’s Giessbach design had some problems. The cars’ passage over the switches was bumpy, and this frequently caused loose bolts on the rail at the rail connections.

As well as the improved design used today:

Abt’s improved solution employed two wheel flanges on the outer wheels on the outboard side of each passenger car as it traversed the turnout.

This allowed for an uninterrupted guidance rail on the outside of the turnout and larger passages for the cable and the cog rail crossing the inner rails. The inner wheels were purely cylindrical without flanges, allowing for smooth passage over the turnout.

This solution is what is still referred to as the “Abt Switch” – a short passing turnout track with no moving parts. It was first employed in the funicular of Citta-Stazione (Lugano Switzerland) in 1886.

The wheel flange configuration can be seen here: “left” tram above, “right” tram below.

So how many rails in Hong Kong?

The Peak Tram is a two-rail funicular rail, with a short section of three rail track.

There are two rails at the top. 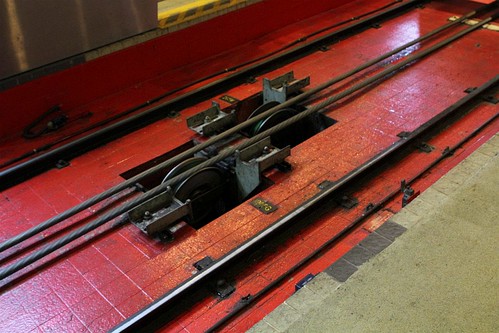 Which continue down the hill below Barker Road station. 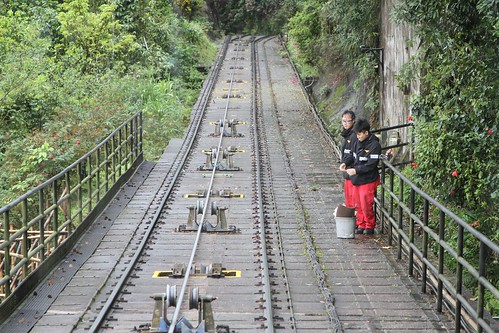 Just before the curve, an Abt switch marks the start of the passing loop. 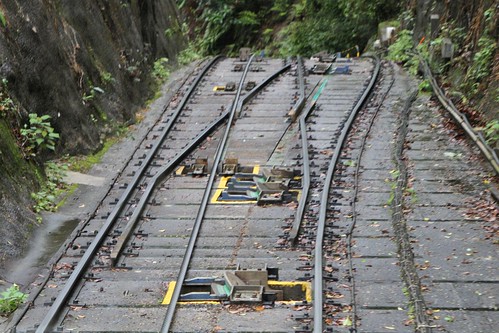 But unlike the diagram seen earlier, this part of the loop has a shared rail in the middle. 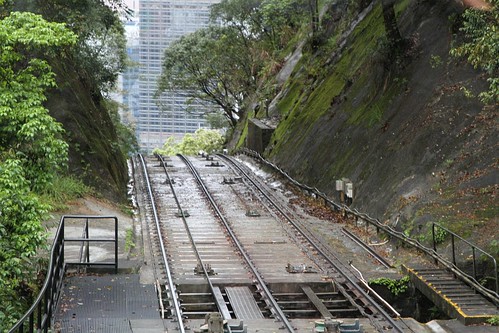 This three rail sections continues down the hill towards May Road. 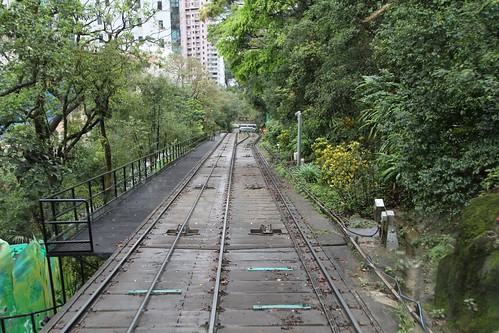 Then transitions into four rails for the actual passing loop. 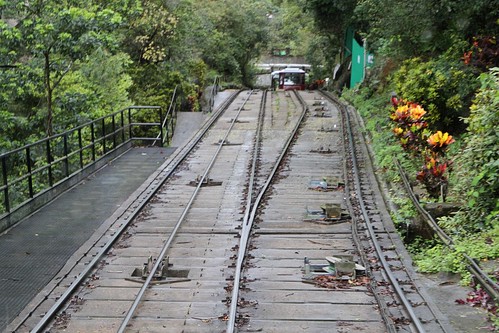 The tramcars then pass each other on the four rail section.

Then the track transitions back to two rails, via a second Abt switch. 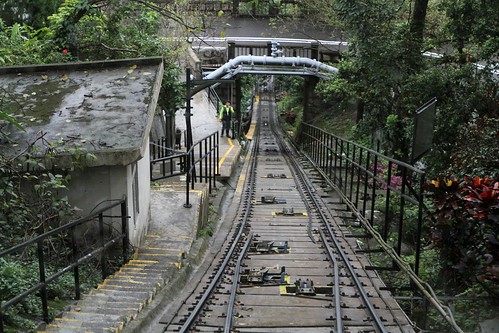 Remaining single track to the bottom. 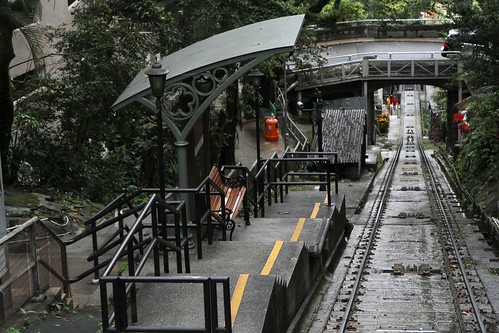 This YouTube video by Tom Flieger from 2016 shows the reverse angle:

So why is there a section of three rail track above the passing loop proper?

Taking a look at the past

Pre-1980s photos of the upper section of the Peak Tram shows a different track arrangement. 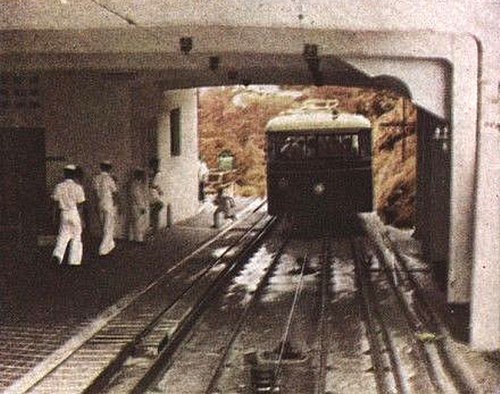 With a total of FIVE rails visible in this photo below the Peak Tower.

Photo by USN, via Wikimedia Commons

The 1888 book Industries and Iron, Volume 4 explains the track configuration as built:

On the lower part of the line two steel rails of 35lb. per yard are laid, of 5ft gauge, and forming a single line; and on the upper half three rails are laid, forming a double line. Half way is a cross siding with four rails about 130ft long in the clear, having switches at the lower end. Cable guide pulleys are placed along the line at distances varying from three to eight yards.

Each carriage is fitted with two steel clip brakes, arranged to grasp the centre brake rail, and to act at all times, unless held out of action by the brakesman; also with a pair of steel clip brake to work on the 35lb. rails. The centre brake rail is of steel, weighing 66lb. per yard, and is laid between the ordinary rails. It is jointed and fixed to the sleepers with steel bolts and clamps.

So the five rails seen at the top of the line are three running rails, and two brake rails.

Presumably the 1989 Peak Tram upgrade made the separate brake rail redundant, so it was removed. But as for the rebuilt of the top section of the line as two-rail track – was it to make space for wider trams to carry more passengers, or just to save money on rails?

With the Peak Tram currently being rebuilt to provide extra passengers capacity, I wonder whether the track arrangement will be changed for a third time?