In June 2019 protests broke out over Hong Kong, opposing legislation proposed by the government of Hong Kong, which would allow local authorities to detain and extradite people who are wanted in territories that Hong Kong does not have extradition agreements with, including mainland China. Here is a quick look at how the protests have spread to Australia. 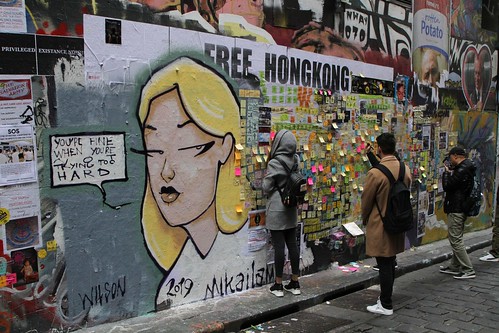 Hi, Melbourne：
I am calling everyone to join me and Australian-HongKong Link for creating #LennonWall in Hoseir Lane #Melbourne to support HKers fighting for their city's freedoms. See you this Saturday！

1. #撑港列侬墙在墨尔本
Poster is up in Melbourne in Hosier Lane.
during my experience of street art，never got any trouble in hoser lane，but from very beginning，already got trouble with Melbourne council inspect，
very llikely got intentionally reported by China trolls. pic.twitter.com/AxLY5oQslQ

And got a mention in local newspaper The Age – Post-it protest in support of Hong Kong backlash over extradition plan:

Hundreds of post-it notes fluttered over the graffiti on Hosier Lane in central Melbourne on Saturday in a message of support to pro-democracy protesters in Hong Kong.

Badiucao invited people in Melbourne to leave messages of solidarity over his mural, similar to the “Lennon walls” – inspired by a Czech wall devoted to the late Beatles frontman John Lennon – that have sprung up across Hong Kong.

“I see Melbourne as my second home town, I really love this city and I want to contribute to it,” Badiucao said before Saturday’s event.

“I think Hosier Lane is a particularly good place, it is the pearl on the crown of Melbourne’s street art scene, it is also a place where I know tonnes of Chinese tourists will come every day.”

“Every photo on Instagram and social media will be the speaker for the Hong Kong people,”Badiucao said. Maybe, ultimately, it will help them in the long term as well. That is why I am calling on every Melbourne citizen to join me.

“I think it’s also a very beautiful thing to collect a message in a physical space. For people to exchange ideas. The form itself is very beautiful with all of the colours.”

The wall was soon covered with messages of support. 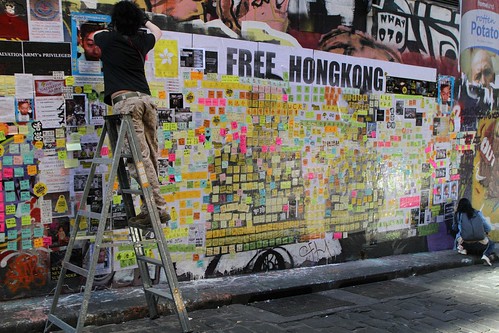 Until it was slowly covered by the street art that Hosier Lane is known for.

On August 12 an Australian tourist at Hong Kong Airport hit the news after attacking protesters for delaying his flight.

“You are angry because your flight is cancelled.”

One stranded Australian tourist got into an argument with protesters at Hong Kong airport, saying they supported independence and that police should crack down harder. It didn’t go well for him. https://t.co/7TryMbHrEW pic.twitter.com/x7dIuNQ5ot

A stranded Australian tourist in Hong Kong has been blasted after he was filmed clashing with pro-democracy protesters and telling them to “get a job” during a massive airport demonstration yesterday.

The man was filmed getting into a heated confrontation with a group of demonstrators who stormed Hong Kong’s airport last night, disrupting operations and freezing flights.

The man, who was not able to board his flight in the chaos, told the group that “the sooner Hong Kong actually becomes a part of mainland China, the better”.

The group of protesters were filmed attempting to reason with the man, explaining that they were fighting for freedom and independence from the Chinese government.

With many Aussies taking the piss.

This is the trifecta of Aussie boomer outrage:

August 14 saw a fake permit letter for a “Support One China Principle” protest in Melbourne appear.

This fake permit letter for a "Support One China Principle" protest in Melbourne this Saturday is being disseminated by multiple Chinese-Australian media orgs on WeChat. pic.twitter.com/nHSrwWRXJ1

A pro-China rally planned for Saturday in Melbourne to condemn the clashes in Hong Kong has been postponed after a letter claiming to be an event permit from the Melbourne City Council was confirmed to be fake.

A well-known local Chinese media outlet, Australian Red Scarf, first announced the pro-Beijing protests in Melbourne on their WeChat account last Friday, accompanied by an image of a letter saying the council approved the “Support One China Principle” event to be held at the State Library in Melbourne.

On Wednesday, the ABC approached the Melbourne City Council about the letter — which claimed the council approved the pro-China rally — who then issued a statement on Twitter announcing that the letter was “fake”.

“The City of Melbourne does not issue permits for protests or demonstrations,” the statement read.

“However, we encourage anyone planning an assembly, demonstration or rally to let Victoria Police and the City of Melbourne know so that we can plan for any effects on parks, public places, streets and footpaths and notify affected businesses and services.

By August 19 fake Chinese police cars were spotted at pro-Hong Kong rallies in Perth and Adelaide.

With ABC News picking up the story:

Authorities are investigating after fake Chinese police cars were spotted in Adelaide and Perth amid pro-Hong Kong demonstrations across Australia, but the owner of one of the cars has told police it was a “joke”.

In South Australia photos have surfaced of a car — bearing Chinese characters — parked at various spots around Adelaide’s CBD.

SA Police told the ABC it was aware of the vehicle’s current location and was investigating if it has been involved in any offences.

Police in Western Australia also confirmed they had received reports of a car with Chinese police markings.

“WA Police spoke to the driver of the vehicle who stated he purchased the decals online,” a spokesperson said.

Badiucao’s Lennon Wall isn’t his first public work in Melbourne – here is one from July 2017:

Via @badiucao – street art in Hosier Lane, Melbourne marking 2 years since the start of China's wide-reaching crackdown on lawyers/activists pic.twitter.com/ZcTEPvyMpf

As well as a shrine for the late Chinese dissident Liu Xiaobo.