In 2016 an interesting conspiracy theory emerged in Hong Kong – would the new high speed rail link to Mainland China be used by the People’s Liberation Army to invade the Special Administrative Region? The People’s Liberation Army Hong Kong Garrison arrived in 1997, and has approximately 5,000 personnel posted to the city. 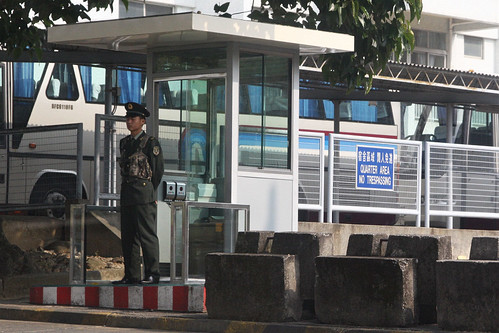 On February 20 Hong Kong politician and social activist Lee Cheuk-yan asked about military use of the new railway at a meeting of the Finance Committee of the Legislative Council.

Finance Committee of the Legislative Council
Minutes of the 34th meeting
Saturday, 20 February 2016, at 11:10 am

Use of XRL for military purpose

Mr Lee Cheuk-yan enquired whether the People’s Liberation Army Hong Kong Garrison (“HK Garrison”) had the right to commandeer XRL for military purpose, and whether there was any passageway in the XRL’s Shek Kong Depot connecting to the Shek Kong Barracks of the HK Garrison. He opined that the authorities should provide a paper to explain the relationship between the Garrison Law and XRL.

At the same time, Hong Kong newspaper Apple Daily picked up on the theories: The Neo Democrats said that it would raise relevant issues at the Finance Committee meeting of the Legislative Council, and oppose the additional funding of the high-speed rail. It does not agree to use the money of Hong Kong people to build a political bomb.

After which Gary Fan raised the question a second time.

Finance Committee of the Legislative Council
Minutes of the 38th meeting
Friday, 26 February 2016, at 6:30 pm

Alleged Military Use of the XRL Project

Secretary for Transport and Housing (“STH”) padvised that the Administration had stressed many times that XRL was purely a transport infrastructure for civilian use and there was no consideration for military use. Dr Philco Wong, Projects Director, MTR Corporation Limited added that the road link did not go to the Shek Kong barracks but to the power distribution station for the purpose of maintenance of facilities. The power distribution station and the Shek Kong barracks were separated by iron wires.

The story gained momentum, as seen in this piece published by 本土新聞Local Press on March 4:

“Now News” quoted the “People’s Liberation Army Daily” report that when the high-speed rail was built, there were absolutely military considerations to quickly transport troops. In the event of a war, the high-speed rail will become a means of transport for soldiers, light armies, artillery and other equipment. The report can be described as the tail pillow after the ghost shot, confirming the reason why the Hong Kong people speculated that the high-speed rail Hong Kong section must be built, not rational economic development, but because of irrational military rule.

Which led to the official Hong Kong Government News Network to publish a Facebook post on March 9 to deny the rumours.

The Transport and Housing Bureau has clarified the inaccurate online claims and rumours and that there is no basis for any statement that the construction of the Hong Kong section of the Guangzhou–Shenzhen–Hong Kong Express Rail Link may be related to military use.

But many Hong Kong people didn’t believe the denial, as detailed in this Stand News 立場新聞 piece.

High-speed rail can be personnel carriers? The Information Services Department said that there is no basis to the netizens post on the People’s Daily.
March 9, 2016

The Government News Network Facebook page uploaded a picture of a high-speed rail at 11 o’clock last night. The picture quoted the Housing Authority as saying that “the planning, design and construction of the high-speed rail section of Hong Kong is fully for civilian use and provides convenient cross-boundary transport services for passengers”

However, as soon as this post came out, the netizen immediately posted a message attached to the mainland official media “People’s Network” originally printed in the “People Liberation Army Daily” article entitled “Military transport security close to actual combat: to create a high-speed rail era “steel transport line”” report link The article includes “to avoid duplication of construction, the military agency focused on implementing the concept of military-civilian integration in the top-level design, embedding military functions in the construction of high-speed rail.” and other content to refute the government’s clarification.

The Information Services Department did not respond to the message, but many netizens commented on the government’s escort. Some people pointed out that “there is no need to use the railway. , waterways, aviation, the words are coming soon, and the People’s Liberation Army is protecting Hong Kong, transporting the People’s Liberation Army, and transporting the US Army or the Japanese Army!”

So could China use the high-speed railway to invade Hong Kong?

China’s high-speed rail network has been available for the use of the People’s Liberation Army for some years. 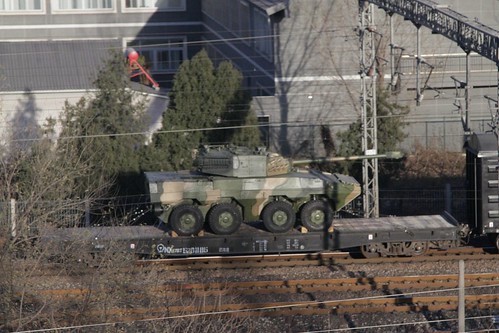 With even Hong Kong’s Now News covering it when first publicised back in 2012.

The People’s Liberation Army refers to the rapid response of high-speed rail
May 25, 2012

The speed of development of high-speed rail in the Mainland has slowed down slightly since the Wenzhou train accident last year. However, many routes such as the Beijing-Shanghai high-speed railway are still open to traffic. It is still convenient for many people. The People’s Liberation Army disclosed for the first time that the high-speed rail was infiltrated with various military elements. Can be used to respond quickly.

The 1,318-kilometer-long Beijing-Shanghai high-speed railway was opened to traffic last year, greatly shortening the transportation time between Beijing, Tianjin, Shandong, Shanghai, etc., between the four provinces and three cities. This convenience is not only convenient for the people, the People’s Liberation Army Daily disclosed for the first time, the military is correct. Utilizing the advantages of high-speed rail, quick and convenient, the high-speed rail is positioned as an important way of strategic transportation in the future. Once a war occurs, the PLA can respond quickly according to the high railway line.

Traditionally, the military will use ordinary railway lines to transport heavy weapons such as tanks and missiles;

The high-speed rail is responsible for transporting soldiers, as well as light weapons such as rifles and recoilless guns.

The report also revealed that the national high-speed rail system has been integrated into military and civilian elements during design. In a short period of time, the civilian railway station can be turned into a military service, which greatly shortens the reaction time of the military. For example, in the expansion project of Nanjing Station, it used the war. The standard design allows the gate to be opened, allowing the soldiers to get on the platform as soon as possible.

The People’s Liberation Army has also developed a gun rack that can be placed in the car box for the high-speed trains, the indoor space is larger than the traditional trains, and the structure is stable.

Because the doors on both sides of the high-speed rail can be opened at the same time, the military has developed a fast-moving and arranging array to improve the efficiency of getting on the train by 50%. So far, the high-speed rail has sent more than 43,000 soldiers to the destination on time.

At the beginning of May, the Nanjing Military Region tried to arrange a group of soldiers carrying light weapons to reach the destination by high-speed train. The soldiers could participate in the battle as soon as they arrived, increasing the PLA’s chances of winning.

And the China News Service ran a puff piece on a PLA training exercise in 2015.

In the midsummer season, a high-speed rail station in northern Jiangsu, a light-loaded force of hundreds of people, quickly boarded a high-speed rail train to a certain place in eastern Fujian. After 52 minutes, the light-loaded troops appeared in the “battlefield” 210 kilometers away, just like the gods and soldiers. Wang Pengyu, director of the Military Affairs Office of the Shanghai Railway Bureau, told the reporter: “‘China Speed’ has boosted the speed of military transport and achieved a rapid arrival in the battlefield.”

The soldiers are very fast. At present, the troops are frequently stationed in the field and non-war military operations. How to quickly and accurately transport the troops and personnel to each “battlefield” has become an urgent issue facing the party committee of the military representative office. It coincides with the opportunity of the great revolution and great development of the railway. The party committee of the military representative office has identified a rationale: “The railway is speeding up, and the military transportation guarantee must be closer to the actual speed!”

And what about Hong Kong

The Shek Kong stabling sidings and emergency rescue station are a massive complex, built to service to high-speed trains that use the new line. 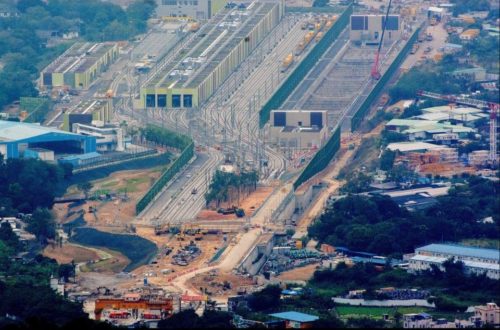 While the emergency rescue station was built for trains to discharge passengers to another train in the event of mechanical problems, or as an evacuation path in case of fire. And it’s big – three tracks and two island platforms, 430 metres long to service a full 16 carriage train, and five sets of staircases back to the surface. So if you wanted to transport People’s Liberation Army troops into Hong Kong quickly, the ’emergency rescue station’ at Shek Kong beats anything with rubber tyres. And before I wrote this piece, I though the joint customs and immigration checkpoint at the West Kowloon Terminus was enough of a political football!