On my most recent visit to Hong Kong I went on a boat trip off Lantau Island, and found something bizarre on the Hong Kong–Zhuhai–Macau Bridge – a mysterious looking white building atop an artificial island in the middle of the sea, with zero signs of life to be found. So what is it? 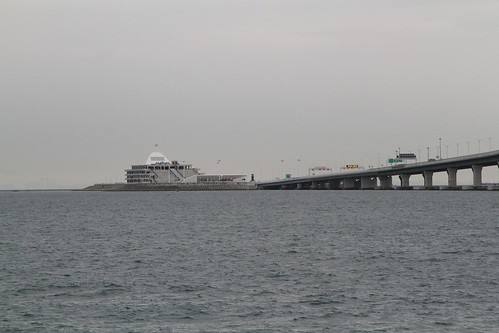 The Hong Kong–Zhuhai–Macau Bridge is a 55 kilometres long bridge–tunnel connecting Hong Kong to China, with two artificial islands in the middle marking the transition between bridge and a 6.7-km immersed tube tunnel beneath the main shipping channel. 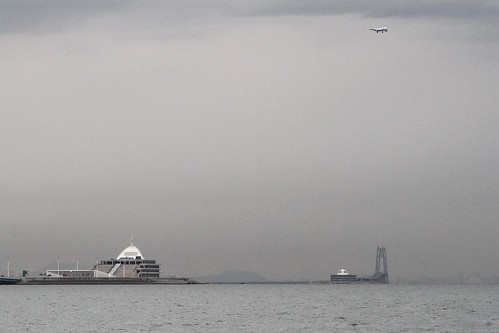 And this is the mysterious looking white building atop the eastern artificial island, at the Hong Kong side of the tunnel. 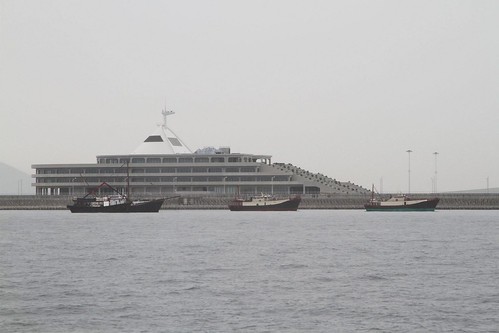 I first saw the artificial island back in November 2013, by which point land reclamation was complete, but the tunnel and bridge either side were still incomplete. 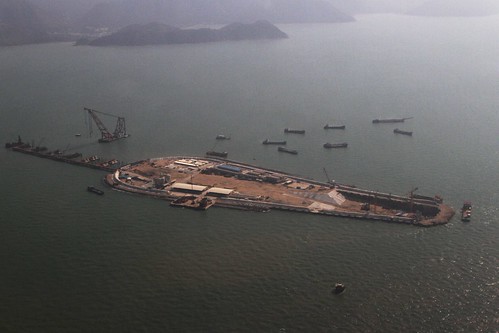 With more construction photos to be found on the Highways Department project website. 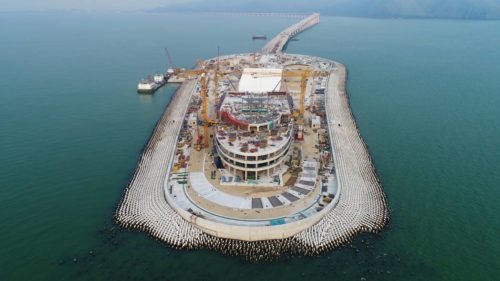 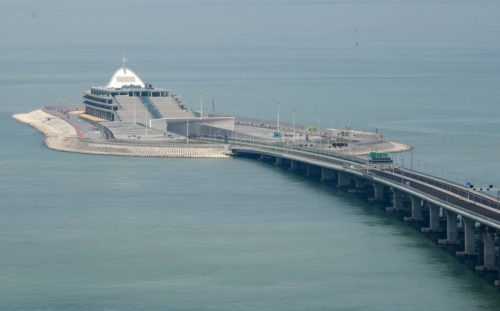 But what is inside 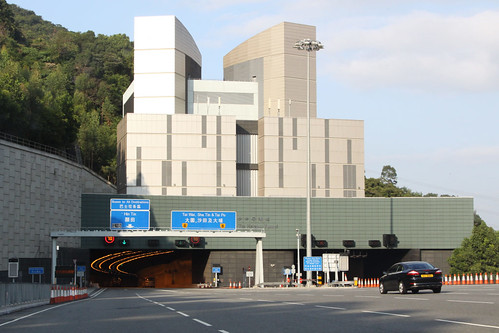 In the case of the western artificial island – named “Blue Dolphin Island” (蓝海豚岛) – a traffic control and surveillance centre has been setup. 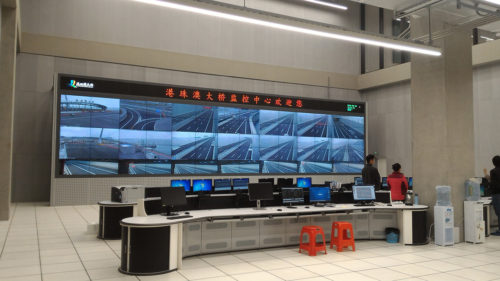 But the east artificial island – named “White Dolphin Island” (白海豚岛) – there just seems to be a lot of CCTV cameras. 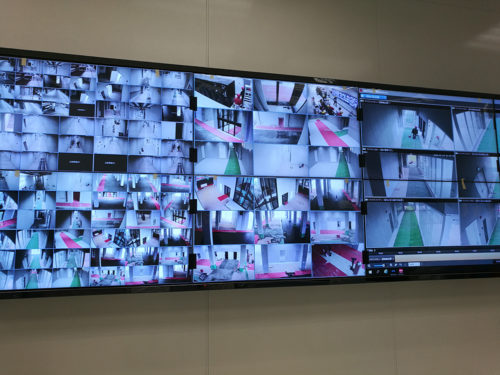 But these artists impressions suggest bigger things are at hand. 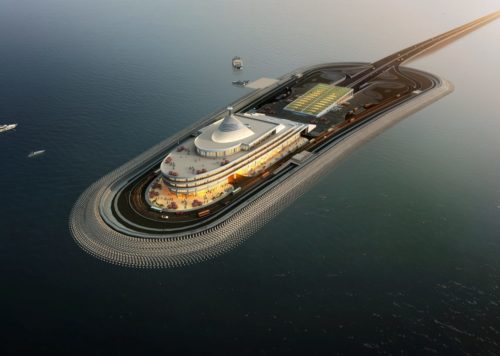 The lights are on. And plenty of people seem to be enjoying the view. 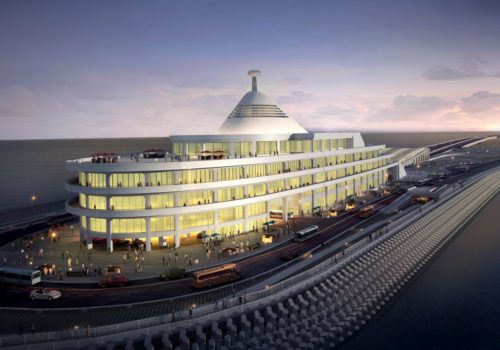 Turns out the second to fourth floors are reserved for future commercial development.

Even before opening the new bridge is quite popular with tourists – but mainly from Mainland China.

With the cross-border bridge linking Hong Kong with Macau and Zhuhai set to open for traffic this year, some mainland-based tour operators have stolen a march by offering packages for travellers to see the infrastructure from afar. But there was a stark contrast on either side of the border in the popularity of the tours – given a warm welcome by those in the north and the cold shoulder in Hong Kong.

Over the last two months of 2017, Hong Kong-based China Travel Service (CTS) organised just 10 groups to join a hot springs tour which included a distant sea view of the bridge. But in December alone, Guangzhou-based agency Guangzhilv had 882 visitors sign up for tours that included boat trips to view the bridge.

The same imbalance of tourist traffic was seen after the bridge opened.

It has been reported that upon the Hong Kong-Zhuhai-Macao Bridge (HZMB) opening to traffic on the 24th of last month, a large number of tourists entering the territory via HZMB have flocked to Tung Chung, and the daily lives of the residents there have been greatly affected as a result.

For example, daily commodities were snapped up and sold out, restaurants experienced an overflow of customers, and a large number of tourists waiting at Tung Chung Bus Terminus for buses heading for the Hong Kong Port caused obstruction to passageways and noise nuisances.

Despite the introduction of a number of tourist diversion measures as announced by the Government on the 9th of this month, the situation has not been significantly improved.

Turns out some visitors are only interested in seeing the bridge.

In addition, the Government is arranging for the setting up of temporary small-scale shops or booths in the HZMB’s BCF to allow travellers to buy souvenirs therein. We are also exploring the introduction of food trucks to serve travellers near the BCF and in Sunny Bay.

Which leads us back to the eastern artificial island.

The Government is exploring with relevant Mainland authorities the opening of the HZMB’s East Artificial Island to the aforementioned group tourists, so as to allow such tourists to visit the HZMB and return to Zhuhai or Macao from the East Artificial Island without crossing the border of the Hong Kong Special Administrative Region.

In March 2019 China Daily addressed some possible issues with the plan.

In his NPC submission this year, Lo said the newly opened Hong Kong-Zhuhai-Macao Bridge should be fully utilized. One of the highlights is the planned tourism center at the east artificial island of the 55-kilometer HZMB – near the Hong Kong side. It should be open to the public soon, Lo said.

The 100,000-square-meter eastern island is located in mainland waters but very close to Hong Kong International Airport. According to the bridge operator, the HZMB Authority, it has buildings reserved for tourism facilities. These include a parking lot, a canteen, shops and a sightseeing platform.

However, the island is a grey area in terms of immigration and customs control. It is located in between checkpoints at the two ends. The relevant authorities are still studying its feasibility, the HZMB Authority said.

“As some travelers just want to visit the bridge, there should be a ‘green channel’ for them, allowing them to visit the east island without crossing the boundary,” Lo said.

But that didn’t stop expressions of interest being invited April 2019.

Plans are underway to turn one of the artificial islands that makes up the Hong Kong-Zhuhai-Macau Bridge into a world-class tourist attraction in an attempt to address complaints about the US$15.3 billion project.

The Hong Kong-Zhuhai-Macao Bridge Authority has invited entertainment companies to bid for the overall planning and conceptual design of a tourism development and supporting facilities on the eastern artificial island of the bridge close to Hong Kong’s Lantau Island, according to a notice posted on its official website.

The operator is stepping up its effort to address complaints over insufficient traffic that could effect the bridge’s commercial viability as well as increased tensions between visitors and Hong Kong residents due to congestion close to the Hong Kong checkpoint.

A staff member with the project’s bidding agent, who refused to give her name, said the operator is open for any concept or style for the project, and that it does not have a preconceived idea of what the island attraction should be.

“They want the bridge [tourist project] to be a world-class brand to attract global visitors,” she said.

Chinese tourists have shown great enthusiasm for the colossal structure as a symbol of China’s engineering prowess and have flocked in large numbers, although this had led to the tensions with local residents of Tung Chung on Lantau Island in Hong Kong who have complained about being inundated by mainland Chinese visitors.

The new plan, for which bidders have until April 30 to complete the application procedure and summit documentation ahead of a field trip and a bidding briefing on May 10, would mean Chinese tourists would not need to enter the city itself.

I guess that explains what the mysterious building!

Footnote: how big are the artificial islands

I found this badly translated page detailing the size of the Hong Kong-Zhuhai-Macau Bridge artificial islands:

The east artificial island is 1563 meters from the Tonggu Channel centreline and it is in oval shape, 625 meters long and 225 meters wide, covering an area of 103,000 square meters.

The west artificial island is 2018 meters from the Lingding Channel (Lingdingyang / 伶仃洋) centreline. It is also in oval shape, 625 meters long and 185 meters wide, covering an area of 98,000 square meters.

The Zhuhai-Macao Ports have built on a newly-filled artificial island, and the island is 950 meters wide from west to east, 1930 meters long from north to west, covering an area of 2,170,000 square meters.

Hong Kong Port is also on an artificial island with an area of 1300,000 square meters, close to Hong Kong International Airport.