I’ve written about the Kowloon Canton Railway’s fleet of diesel locomotives before, as well as the MTR’s fleet of battery electric and diesel locomotives, but turns out I was only scratching the surface – on the West Rail line there is another type in use – the Chinese built JMY450 diesel hydraulics. 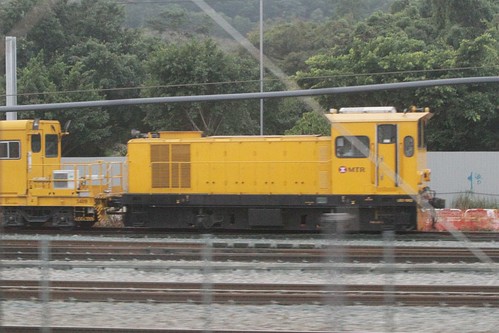 The locomotives were ordered by the KCRC as part of the West Rail line works, with the HK$33 million contract SP-2100 awarded to Shenzhen Sunray Group Co Ltd in June 2000, with the first three locomotives handed over in May 2001.

The first three KCR West Rail diesel locomotives, are completed in Changzhou, Jiangsu, today (Wednesday) and handed over to Kowloon-Canton Railway Corporation (KCRC) by the Deputy Mayor of Changzhou.

The major function of the locomotives is to provide effective and convenient transportation on the newly installed West Rail tracks during the project’s construction stage, enabling engineering staff to install other railway systems along the 30.5 km alignment of West Rail in an effective manner.

The locomotives ready for delivery in Changzhou, China, were handed over to KCRC at a ceremony officiated by Deputy Mayor of Changzhou, Mr Wang Zhengping. The three locomotives will then be delivered to Hong Kong in June. The remaining 11 locomotives to be supplied under the same contract will come in four batches, with the last batch arriving in Hong Kong in April next year.

The on time delivery of the locomotives is of significance to the construction of West Rail as it will facilitate the commencement of the installation work of other railway systems contracts, including telecommunications systems, train control and signalling, as well as traction power supply and overhead line.

“The timely delivery of engineering supplies is critical to opening of West Rail on time and within budget. The West Rail project is progressing well and we are confident that West Rail will commence operation by the end of 2003,” a KCRC spokesman said.

The diesel Locomotives contract, with a value of $33 million, was awarded in June last year. The contractor is Shenzhen Sunray Group Company Limited, which is under the Ministry of Railways of China.

JMY450 hydraulic diesel locomotive can be applied for standard track gauge or for short distance operation, it also can supply traction power for other usage. 14 locomotives of this type have been ordered by Hong Kong Kowloon-Canton Railway corporation (KCRC).

The locomotive is provided with Caterpillar diesel engine with low fuel consumption and electrical fuel ejecting system and the emission of which can comply to EUR II standard, hydraulic reversing, electrical automatic gear shift, low speed control,and faults protecting device. The locomotives can be multiple unit operated, and kept with low noise and pollution which comply to the environmental protection specification of Hong Kong Government.

Along with a specification sheet: 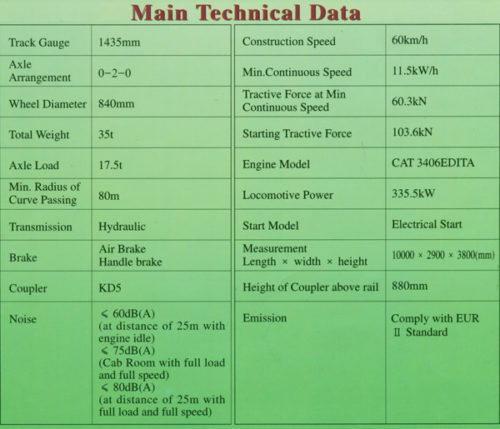 14 locomotives #1001-1014 are assigned to the West Rail Line, with an additional two locomotives #1101-1102 to the Ma On Shan Line. Their primary use is shunting trains around maintenance centres, such as this SP1900 set at Pat Heung Depot.