The list of diesel locomotives in Hong Kong keeps on growing now that I’m digging into the MTR maintenances and work train fleet – the latest entry is the Chinese built CKD0A diesel electric locomotives. 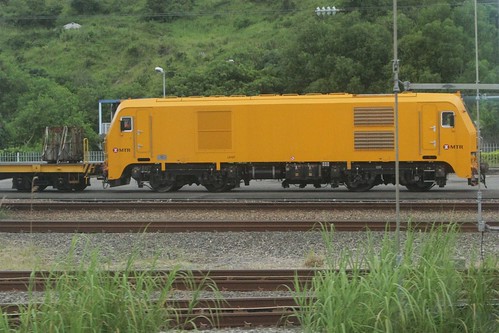 The units were ordered in November 2012:

Following fierce competition, the first independently developed diesel locomotives made on the Chinese mainland have been selected by Hong Kong’s Mass Transit Railway Corp for use in its world-class transit system.

China CNR Co announced last week that it has secured an order worth more than 160 million yuan ($25.7 million) from the MTR for 23 diesel locomotives made with its proprietary technologies.

The designer and builder of the locomotives is a wholly owned CNR subsidiary headquartered in Dalian, Liaoning province.

According to an announcement from the State-owned railway equipment manufacturer, its CKD0A locomotives ordered by the MTR meet the strictest global emission standards and reduce operational noise to less than 70 decibels, lower than the 78-decibel standard on the Chinese mainland.

It can run at 80 kilometers an hour powered by two electric motors and a diesel engine. The design also provides more interior room by eliminating the need for a gearbox, which also improves the locomotive’s reliability.

The driver’s cab has two sets of controllers equipped with computer and cruise control systems.

The CKD0A locomotive is expected to be used in MTR’s rolling stock in addition to subway vehicle rescue.

The contract calls for the first locomotive to be delivered to MTR by March 2014, followed by a 5,000-kilometer test run.

The manufacturer describes them as:

The locomotive has the characteristics of low emission, low noise, large traction, strong curve passing ability, high degree of automation, high reliability, small maintenance workload, etc. It is fully applicable to the urban subway company’s shunting operation and is the most advanced direct current in the world. Transmission diesel locomotive. The locomotive adopts the subway limit and is a double-cab indoor corridor structure.

It is equipped with CATERPPILAR company C32 diesel engine, which can meet the EU Stage IIIB emission standard and the loading power is 830kW. It adopts AC and DC electric drive, and the auxiliary equipment drives the AC motor drive mode; auxiliary control The voltage is 74VDC; the locomotive shaft is Bo-Bo, the continuous traction force is 149kN, and a single train 250t train can be started on the 35‰ ramp or at 18km/h. The maximum running speed of the locomotive is 80km/h. Adopting German KNORR An air-to-air brake system controlled by the MBS microcomputer in accordance with the UIC standard; with resistance braking and reconnection control functions; and anti-air-slip anti-slip control function.

By 2015 locomotives were being unloaded at Pat Heung Depot on the West Rail Line, with the 23 locomotives numbered L9001 through 9023.

The first four of 23 diesel locomotives which MTR Corp ordered from CCRC Dalian in September 2012 have entered service in Hong Kong following the completion of testing. They will be used to haul maintenance trains on the existing network, and to support the construction of the Shatin – Central Link.

The 830 kW locomotives have a maximum speed of 80 km/h. According to the manufacturer, they are designed to meet international standards, complying with European Stage IIIB emission standards and also taking into account human factors in the layout of the low-noise cabs.