Hong Kong’s most famous funicular railway is the Peak Tram, running up the hills of Hong Kong Island to Victoria Peak. But there is a second funicular, much less well known – the ‘Ocean Express’ train at Ocean Park. 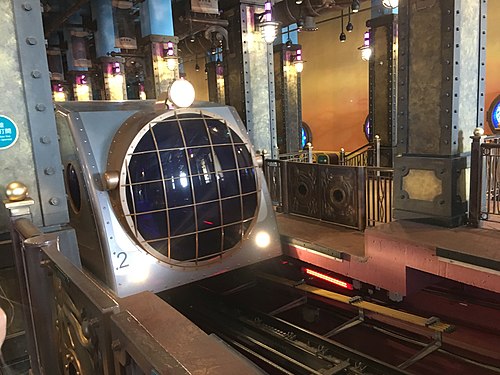 Ocean Park is spread across two sites – the ‘Waterfront’ entry plaza, and the ‘Summit’ marine park – which are linked by a cable car system. 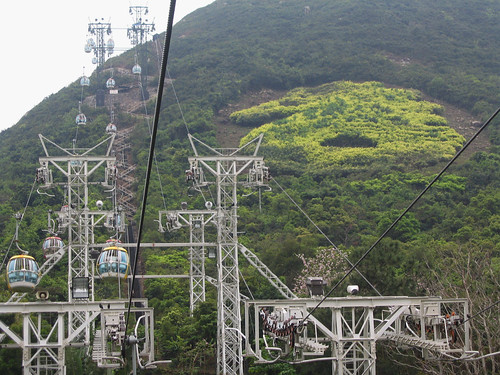 But due to the exposed environment, it cannot run in bad weather. 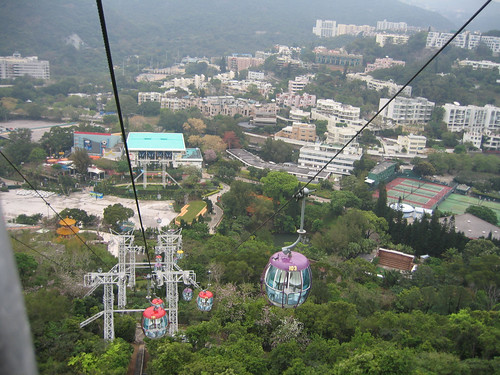 So a parallel transport system was conceived – the ‘Ocean Express’ funicular. 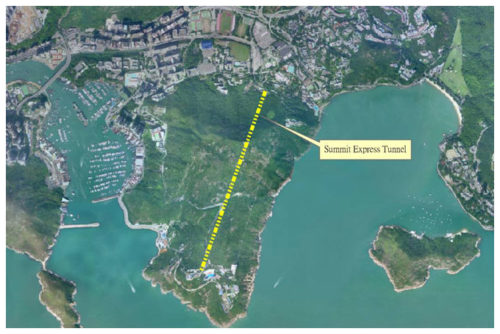 Passengers board at the ‘Twenty Thousand Leagues under the Sea’ themed lower station.

Photo by Shingmathais, via Wikimedia Commons

Photo by Underwaterbuffalo, via Wikimedia Commons

With separate platforms to exit and board.

Photo by Underwaterbuffalo, via Wikimedia Commons

Time to go into the tunnel, which is single track. 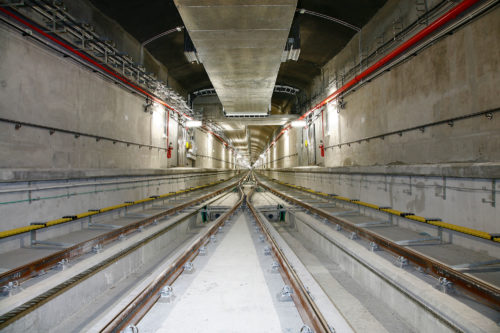 With a passing loop at the midpoint, where ascending and descending trains cross. We continue uphill, and arrive at the top station.

In 2006 Ocean Park unveiled their ‘Master Redevelopment Project’, part of which was the ‘Ocean Express’ funicular paralleling the existing cable car system. This was approved by the government in July 2006. Work on the project started on 20 September 2007, with 1.1 kilometres of the route in tunnel, which was constructed by the drill-and-blast method. 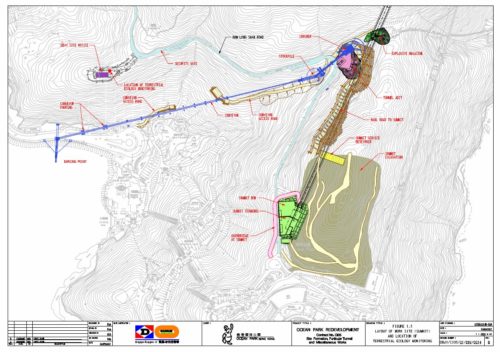 A temporary conveyor belt system was used to transport spoil from the Summit station down to Tai Shue Wan for disposal by barge. Track laying commenced in Fall 2008.

The two 2-car long trains were manufactured by Gangloff AG. Each vehicle is supplied with electricity by live rails on both sides along the entire length of the line. 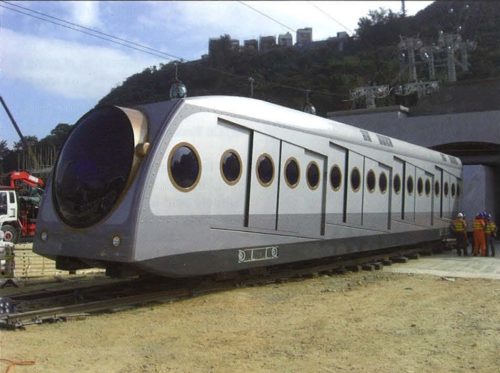 The funicular system was supplied by Doppelmayr Garaventa Group. The main traction cable is 43 mm in diameter, the driving disc has a 3.4 metre diameter and a top speed of 53.91 rpm, driven by two traction groups of nominal 580 kW power. The system can operate with only one of the traction groups in service. A separate diesel engine and hydraulic motor is also in provided in case of power supply failure. Due to the shallow gradient, a secondary 26 mm counter cable is in place, hydraulically tautened in the lower station.

An emergency excavation walkway is located on both sides of the tracks. This is linked to a parallel escape passage by fire doors located every 50 metres, pressurised to exclude fire and smoke. The escape passage has exits at both ends of the tunnel, as well as a third exit at the midpoint.

A soft opening of the funicular was held in August 2009, with a grand opening on 9 September 2009.