Shanghai seems to be the China’s home of gadgetbahns – modes of public transportation that are unnecessary complicated. The Shanghai Maglev and the Zhangjiang Tram are two examples, but Shanghai has a third – the cable hauled trains that run through the Bund Sightseeing Tunnel.

Rather misleadingly named, the Bund Sightseeing Tunnel doesn’t actually offer any sightseeing – just a light show, as passengers are taken beneath the Huangpu River between The Bund and Pudong.

The tunnel was developed by the Shanghai Lujiazui Development Group, with construction commencing in early 1998. At the time they described it as:

The Huangpu River Pedestrian Tunnel, China’s first river pedestrian tunnel with the length of 646.70 meters, located between the Nanjing East Road Bund in Puxi and the Oriental Pearl TV Tower in Pudong Lujiazui, is scheduled to be completed on October 1st, 1999 and to be officially put into operation in April 18, 2000.

Tunnel visitors will be transported in the automatic, unmanned, cable-towed, and closed-type carriages of the advanced technology of the nineties. It takes about 2.5 to 5 minutes to make a one-way ride beneath the river at a speed of 5 meters per second. At its maximum handling capacity it can transport 5,280 persons per hour or 28,000 passengers per day.

Modern science and high technologies will be employed to make use of the inside space of the tunnel, showing various pictures, scenes, and background music reflecting people, history, culture, science and technology, and landscapes, to make the cross-river ride extremely interesting, amusing, and exciting, and to leave riders a nice memory of the underground ride.

Trains through the tunnel use the SK-6000 people mover system developed by Soulé of France, which uses cables beneath the rails to pull small driverless cabins along the track.

Photo by 罗布泊, via Wikimedia Commons

Travel time between the two stations is 2.5 to 5 minutes, with an overall capacity of 5280 passengers per hour. Platform screen doors prevent passengers from accessing the track at platforms.

Separate arrivals and departure platforms being provided at each station. 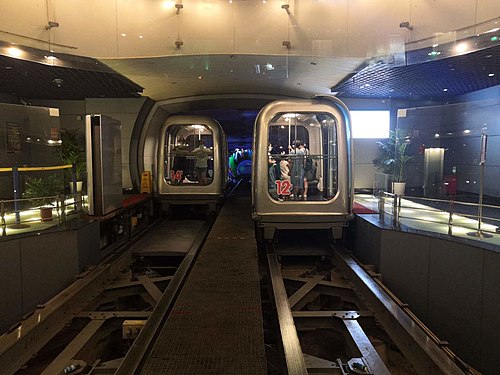 Photo by VictorSilverpioneer, via Wikimedia Commons

And a 7 meter diameter rotating turntable turns each cabin onto the return track, with up to 14 vehicles being able to operate at once. A small maintenance workshop is located at the Pudong Station. 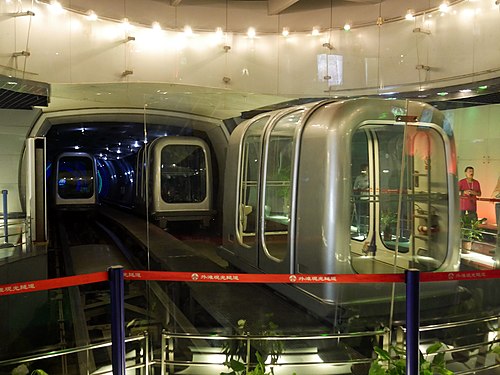 Photo by Anagoria, via Wikimedia Commons

The tunnel was completed in April 2000, with trial operation commencing in July 2000, opening to passengers on 1 January 2001.

In the first two years 5.5 million tourists used the tunnel, with 10 million passengers reached in September 2005. As of 2006 the average annual patronage was around 2 million.

The diameter of the shield was 7.65m and the radius inside the tunnel is 3.38m. The tunnel lining ring is assembled from six reinforced concrete segments, the ring width is 120cm, and the thickness is 35cm. 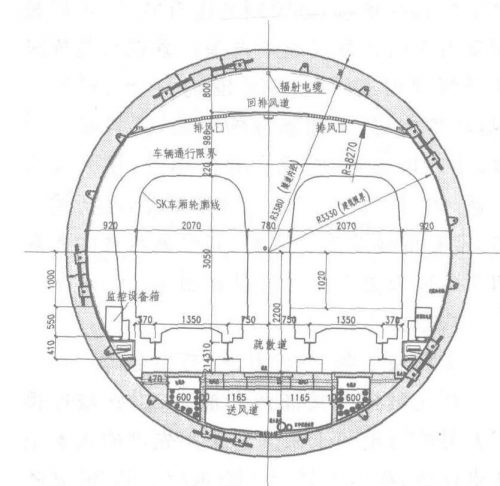 Between the two stations, the tunnel follows a curve with a radius of 400 meters, coming within 1.4 metres of the existing Shanghai Metro line 2 tunnels. The main strata traversed by the tunnel are clay, silty clay, silty clay and sandy silt.

The maximum gradient is 4.8%, with the tunnel passing only 5.67 metres below the Huangpu River. The track gauge is 1350mm, with each carriage being 2070mm wide and around 5 metres long.

Stations are located underground – that in Pudong having 3 levels below ground.

And the station in Puxi having four levels reaching a maximum depth of 26.20 meters. Twelve escalators and four lifts serve each station, the maximum vertical rise being 11.07 meters.