On my trip out to the Great Wall of China by train, I found something downright bizarre while staring out of the carriage window – a multi-lane expressway that terminated suddenly ended at a field of trees. So what gives? 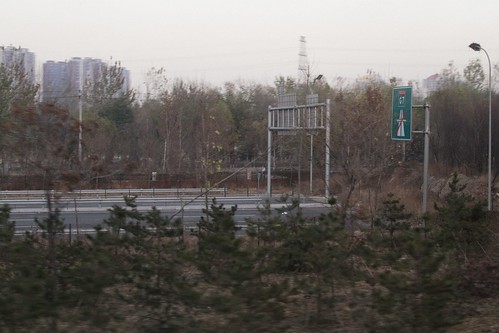 Tracking down the dead end

Luckily the ‘End Expressway’ sign I photographed one one big clue on it – the G7 route number. 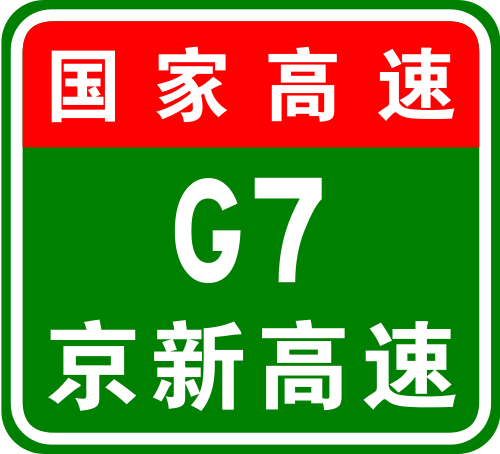 Photo by Siyuwj, via Wikimedia Commons

So over to Baidu Maps, and I followed the route my train took north from Beijing, when I found this suspicious looking stub of expressway just south of Beijing’s 5th Ring Road.

And switching to satellite view confirmed it – this was the same dead end expressway that I’d photographed. I went to check the situation on the ground, but Google Street View doesn’t exist in China – but luckily Baidu Maps has their own similar service.

I started my virtual roadtrip on the G7 expressway headed southbound. 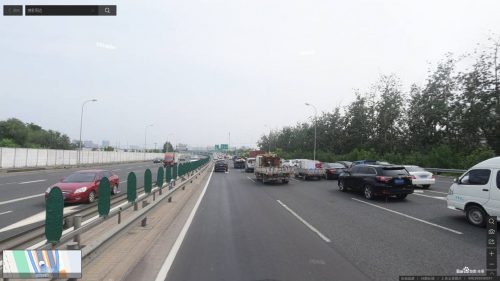 I soon reached the 5th Ring Road interchange, where I was greeted by a “End Expressway 2km” sign. I then passed under the 5th Ring Road interchange itself. 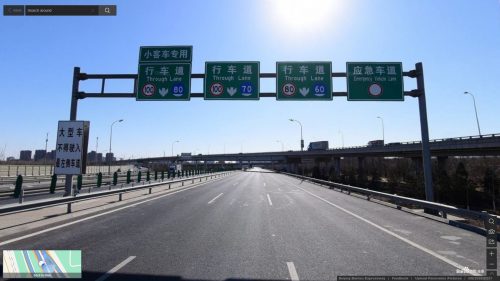 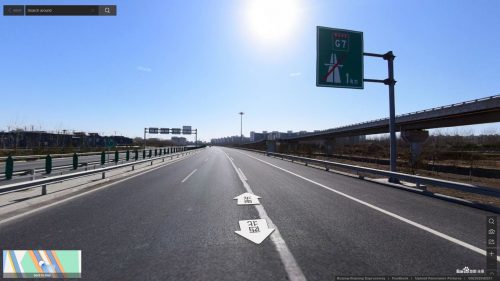 Meanwhile traffic entering the G7 expressway from the 5th Ring Road was greeted with a “700m Yuequan Road” sign. A little further along I could see a side road entering the expressway via right in / right out ramps. Then the expressway started to narrow. 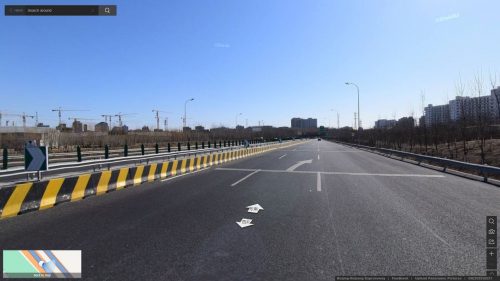 I could now see the end was near. 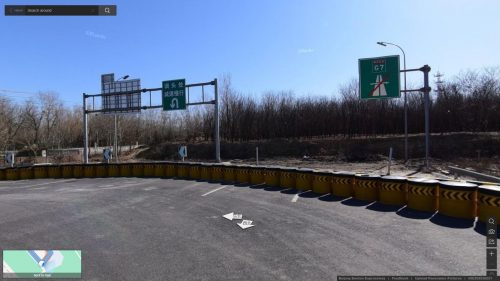 But it wasn’t over – time to do a u-turn and head back northbound. 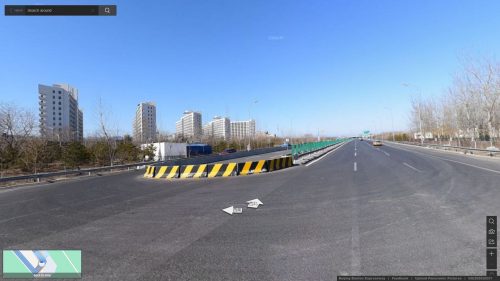 An overhead sign indicating an exit to “Yuequan Road”. Peeling away from the expressway.

With right in / right out ramps. Until I was back where I started – the 5th Ring Road interchange. 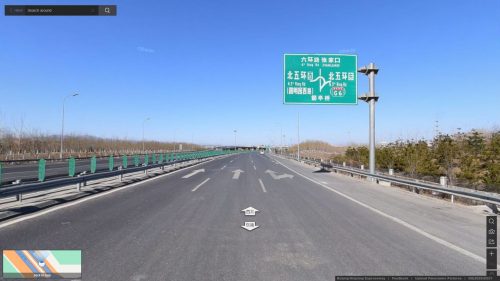 It turns out that the G7 Expressway isn’t just any road, but a 2,540 km journey that starts in Beijing and crosses several deserts before reaching Ürümqi, capital of the Xinjiang Uyghur Autonomous Region in the far northwest of China.

Photo by Pafun, via Wikimedia Commons And by 2012 work on an the extension south towards Yuequan Road can be seen. 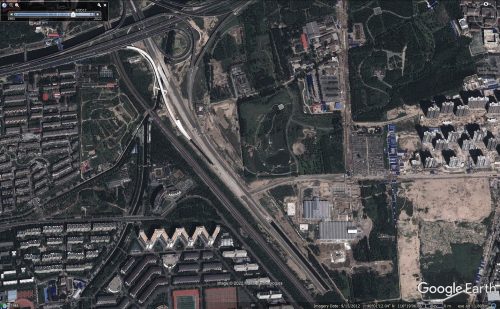 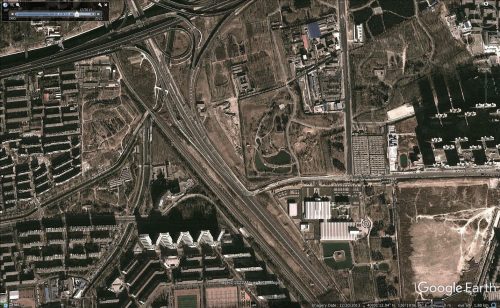 In 2014 the Yuequan Road exit now looks to be open to traffic. 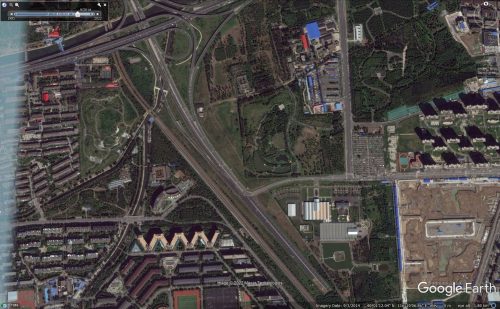 But with the G7 Expressway running directly into Yuequan Road. 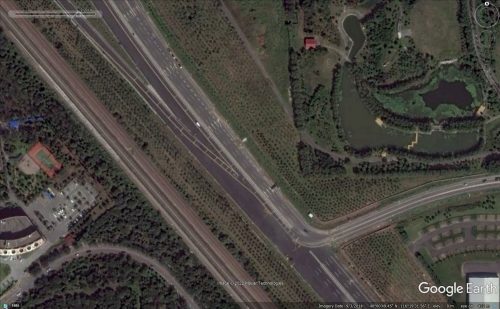 With the current u-turn at the end of the expressway not appearing until 2015. 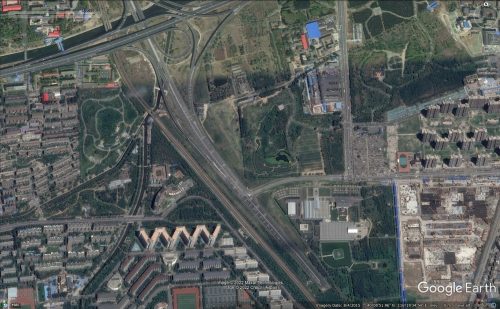 So why is there a dead end anyway?

My theory was that the dead end stub of the G7 Expressway was intended for a future extension southward, and this 2015 Chinese-language news article confirmed it – as well as explaining the reason it was built.

Zhou Zhengyu, director of the Municipal Transportation Commission, introduced in the morning that, in order to better play the functions of the Beijing-Xinjiang Expressway, the Municipal Transportation Commission organized and implemented the traffic facilities improvement project for the Beijing-Xinjiang Expressway connecting line in accordance with the congestion relief project mode. The opening of the connecting line can realize the Jingxin Expressway The connection with the surrounding road networks such as Yuequan Road, Maofang Road, Shuangqing Road and Xueqing Road is of great significance for alleviating traffic congestion in the surrounding areas.

Zhou Zhengyu also revealed that in the future, Beijing-Xinjiang Expressway will play a greater role. From the current Fifth Ring Road Jianting Bridge to the city, a new interchange will be built between Baofu Temple Bridge and Xueyuan Road on the Fourth Ring Road. It will also be directly connected to Wenhui Bridge in the Third Ring Road.

The proposed extension took the G7 Expressway deeper into Beijing, following the elevated Line 13 of the Beijing Subway.

As well as the Beijing–Zhangjiakou Railway, which ran at ground level through densely populated districts. 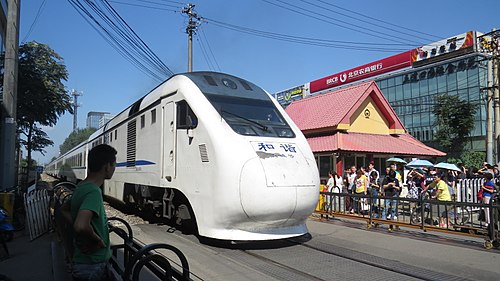 But the upcoming Beijing-Zhangjiakou high-speed railway was given as a reason to delay the extension of the expressway.

Work started on the aforementioned Beijing-Zhangjiakou high-speed railway in 2016, when the Beijing end of the existing Beijing–Zhangjiakou Railway was closed to traffic, and replaced by the 5.33 km long double track Qinghuayuan Tunnel.

Which took new high-speed trains beneath the city streets from December 2019.

But progress on the G7 Expressway extension? Someone asked the Beijing Municipal Commission of Transportation this very question in August 2020, and got a detailed reply.

Your suggestion on eliminating the “broken road” on the Beijing-Xinjiang Expressway (G7) has been received. We have conducted a serious study with the Municipal Public Security Bureau, the Municipal Planning and Natural Resources Commission, and the Haidian District Government, and hereby reply to the relevant situation as follows:

1. On the issue of clearing the “dead end road” of the national expressway

In 2013, the Ministry of Transport and the National Development and Reform Commission clarified the definition of the national expressway “dead end road” on the basis of full research and demonstration, and identified specific projects. Beijing includes: Beijing-Taiwan Expressway, Beijing-Qindao Expressway, and the Capital Area Ring Expressway. After 5 years of hard work, in 2018, Beijing opened up all the national expressways in the city to “dead end roads”.

Beijing-Xinjiang Expressway is a national expressway, numbered G7. The starting point is Jianting Bridge on the North Fifth Ring Road, extending to the northwest. It is an important expressway in the northern part of the city and has been implemented as planned.

Stating the tight timelines for the construction of the railway, combined with the tight corridor it was being built along, saw the expressway extension deprioritised.

In 2016, the public company affiliated to the Shoufa Group has carried out research on the design plan and related preliminary work, and it was included in the construction plan of our commission in 2017. In order to promote the construction and implementation of Jingbao Road, in September 2017, our commission and the Municipal Housing and Urban-Rural Development Committee reached an agreement on the simultaneous implementation of the joint construction section of Jingbao Road and the Beijing-Zhangjiakou High-speed Railway.

At present, the Beijing-Zhangjiakou high-speed railway has been completed and opened to traffic. During its operation, the management requirements are that the impact of surrounding buildings on its structure should be controlled and the settlement index should be 2 mm upward and 1 mm downward. -3 meters, the existing construction technology and technical level cannot meet the operation requirements of the Beijing-Zhangjiakou high-speed railway, so the Jingbao Road cannot be constructed in the near future.

The Municipal Commission detailing the interim solutions put in place to deal with traffic.

4. Work has been carried out

And what looks looks to be an acknowledgement that expanding an expressway into central Beijing might be a bad idea.

5. The next work arrangement

The access of Beijing-Xinjiang Expressway within the Fifth Ring Road will objectively increase the traffic pressure in the central city. In the next stage, our commission will continue to strengthen the research on the road network system in the region, continuously improve and improve the traffic conditions in the northwest region, and accelerate the construction of safe, convenient, An efficient, green and economical comprehensive transportation system can meet the diverse travel needs of the people to the greatest extent.

So will the G7 Expressway ever be extended – only time will tell.

“Walking Joe’s Studio” has a dashcam video of the drive along the G7 Expressway, including taking the u-turn for the Yuequan Road exit – jump to the 11:30 mark.

Bilibili user “超牛的小霸王” also has a dashcam video of the same drive, but with a Chinese pop backing track – jump forward to the 5:45 mark.

This entry was posted in Transport and tagged China, freeways, mainland, mystery, on the road. Bookmark the permalink.