When looking at tourist guides, one piece of advice keeps coming up for the Hong Kong – Macau ferry – don’t buy tickets from the touts at the ferry pier. Yet the advice from my family in Hong Kong was the opposite – that’s how you can get a cheap ride. So what’s the real story? 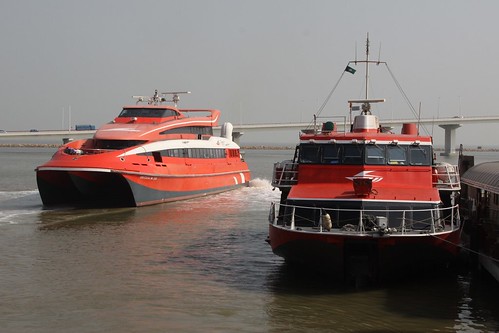 Time to buy a ticket

When I arrived into the ferry terminal, the ticket touts are there to greet us. 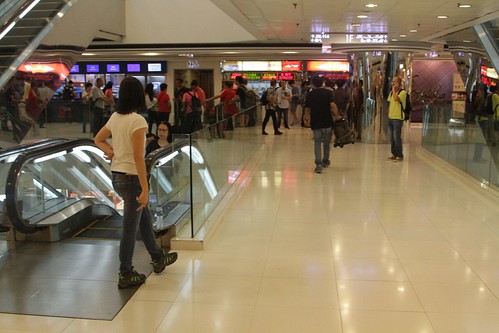 Leading you towards their companion holding the tickets by the departure gates. 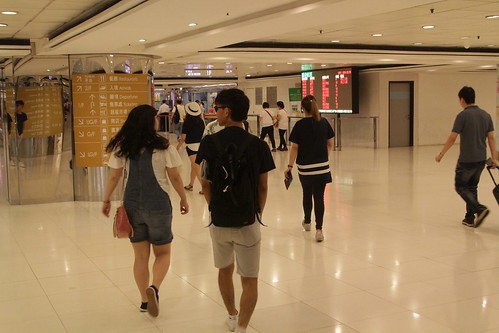 But the ticket counters are in the opposite direction. 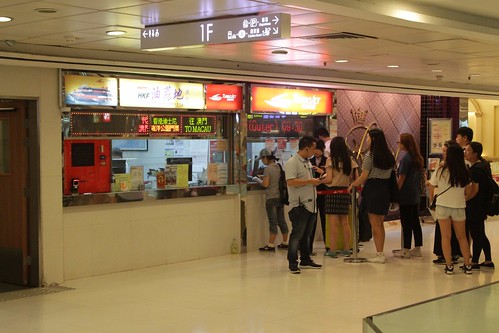 We opted to buy tickets from the official counter, then headed for the departure gate. 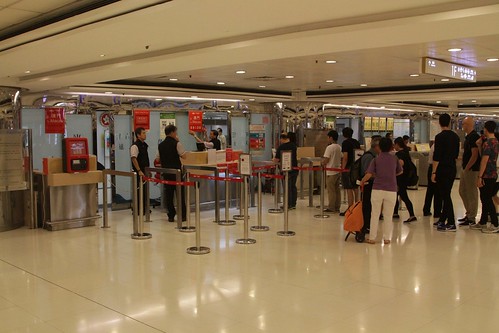 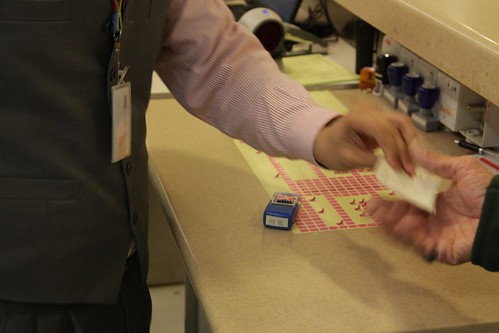 From a sheet of itty-bitty little stickers. 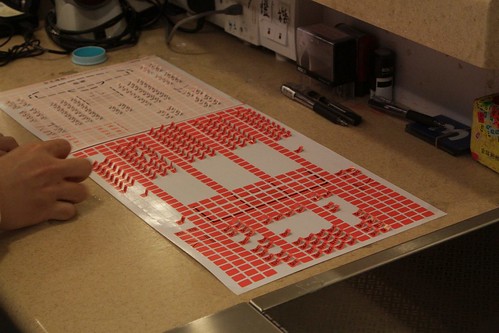 After clearing immigration and customers, it was down the tamp to the ferry. 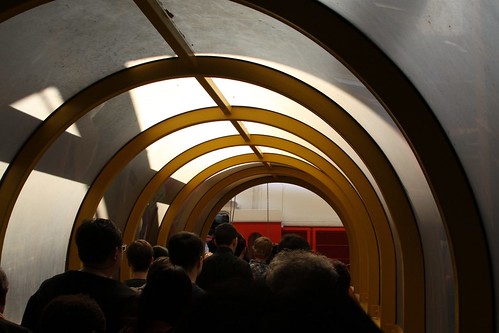 And we were on board. 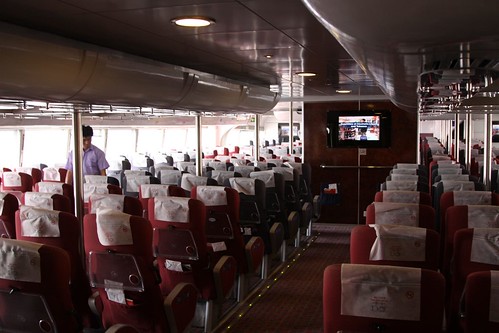 Advice from other tourists

Over at Tripadvisor, one reviewer says:

Don’t take any notice of individuals trying to sell you tickets go straight to your chose of jet ferry provider depending on which island you want to go to.

Beware of ticket touts who approach you before you can reach the official sales counters. May be persistent and irritating. Just ignore them and walk directly to sales counters to buy tickets.

And someone who got hustled by them.

As we were going up the escalator, some of my friends who reached the top ahead were hustled by this young man talking loudly and appearing very much in charge, saying we had to hurry because the ferry was leaving soon.

The story this Yelp reviewer gave is the same one I got from my cousin – it’s not an outright scam.

You can get tickets by queuing at the counter. Or you can “get tickets” from the one of those strangers standing around scalping tickets at a discount. First of all, they are legit. They are often travel agents or tour groups, purchase ferry tickets in bulk from the ferry company. When they have residual tickets, they resell them individually, at a discount but still be able to make money, before the ferry departs and the tickets expired.

But their desire to offload tickets looks like a high-pressure scam.

The guy was probably one of the casino “brokers” who get wholesale tickets and resell them, so it’s not really a scam and he’s probably earning money. I guess the tickets were about to expire and he was at a rush to get rid of them. After the departure time, the tickets would be void.

But it appears the touts are also responsible for driving up the prices of ferry tickets.

But when it comes to holidays or weekends, the scalpers will usually set the ticket price above the official one according to the demand.

That time I did approach the suspected scalper and was later told that they sold each 12.30pm ticket for $50 more – I forgot how much the price was exactly. I saw the man inside the travel agency holding a thick stack of ferry tickets, and so you could image how much profit they could make if they sold them all.

Sometimes resulting in entire ferry sailings being sold out.

Ferry tickets at Sheung Wan sell out by the minute, and there are ferries every five minutes. Nearby tourist agencies offer ferry tickets for immediate departure in a system that can only be described as legalised scalping.

No wonder tickets sell out so quickly at the counter: the agencies buy out chunks of tickets for resale at inflated prices. This leads to the ‘waiting line’ extravaganza at the ferry terminal: you can depart on any ferry earlier than your ticketed ferry, so long as there are seats available.

So, for the next departing ferry, there are two lines: one for legitimate ticket holders, another a ‘waiting line’ for those who want an earlier ride. Once that ferry is full, the waiting line immediately dissipates to queue up for the next ferry. It’s certainly a game, and an easy game to get sucked into by the crowd

It appears the ticket touts have been at work for years – as this 2000 piece from the South China Morning Post attests.

A South China Morning Post investigation carried out before this weekend’s rush for tickets found the touts usually operate during the peak hour, between 5pm and 6pm.

Six men stood in front of TurboJet’s ticket booths offering tickets. ‘$160, $160’, they said, referring to the price of economy-class tickets on offer.

The scalpers work as a group.

On weekdays they sell the economy tickets – marked ‘complimentary’ – for $160, one dollar less than the normal night-service.

At weekends the economy tickets go for $200. It is believed the touts get the tickets from agents who make bulk bookings.

And laws against the practice passed way back in 1982.

The Secretary for Security moved the second reading of:―‘A bill to amend the Summary Offences Ordinance’.

He said:―Sir, I move the second reading of the Summary Offences (Amendment) Bill 1982, the purpose of which is to prevent the resale at a profit of travel tickets in public places.

In order for the Police to take action under existing legislation, the activities of ‘ticket touts’ must be quote, ‘to the annoyance of or in a manner likely to annoy any other person’ unquote. In the past, it has been comparatively rare for such complaints to be made to the Police because in most cases the person directly importuned was perforce willing, or eager, to buy the ticket offered.

However, statistics on recent prosecutions indicate that the problem is growing, mainly in respect of the organized reselling in public at exhorbitant prices of Hong Kong/Macau ferry, hydrofoil and jetfoil tickets. This usually takes place in the vicinity of the Macau ferry wharf.

The Places of Public Entertainment Ordinance prohibits the sale of tickets for public entertainment in certain public places, or at a price exceeding that stipulated by the organizer or promoter of the entertainment. It is considered that similar provision should be made in the Summary Offences Ordinance in respect of travel tickets. This Bill, therefore, seeks to make it an offence for any person to sell in a public place, at a price exceeding the authorized price, a ticket or voucher issued for travel on any type of public conveyance.

Provision is made to cover all modes of public transport to prevent the so called ‘scalpers’ transferring their attention to other areas, such as for example the resale of Kowloon-Canton Railway tickets during the Lunar New Year period.

So buying ferry tickets from a tout might save you money, but some words of advice:

And finally – if the touts have bought up all of the tickets for the next ferry sailing, there is always the option to buy an ticket from the “legitimate” office and join the standby line.

This entry was posted in Transport and tagged crime, ferries, Hong Kong, hydrofoil, Macau, on the water, police. Bookmark the permalink.