One of Hong Kong’s most infamous stench was that of the pig trains, leaving a stinky trail as they made their way from mainland China along the Kowloon Canton Railway to Hung Hom, to feed a local population hungry for pork. 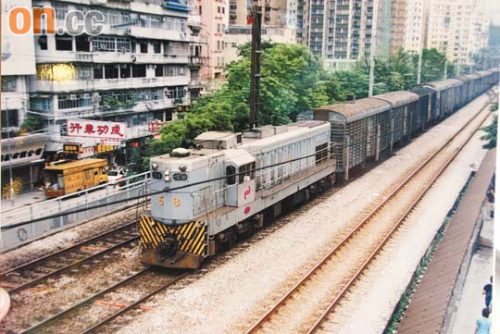 The first pig train from mainland China crossed the border into Hong Kong in 1962.

Previously, due to the lack of special trains, fresh and live commodities supplied to Hong Kong and Macao could only be transported as ordinary goods, and sometimes they had not yet reached the destination, and a large number of livestock and poultry had died. In 1961, under the care of Premier Zhou Enlai, the Ministry of Foreign Trade and the Ministry of Railways held a meeting in Shanghai and came up with a plan for express delivery.

On March 20, 1962, the first train for fresh and live goods to Hong Kong departed from Wuhan Jiang’an Station, that is, the subsequent train 751. A total of more than 30 carriages were dispatched, of which more than 20 were used to carry live pigs. The train ran for 52 hours and arrived at Shenzhen North Railway Station at around 4 am two days later, catching up with the morning market in Hong Kong. The transportation time has been shortened from the previous eight to ten days, to two to three days, and the full truckload of goods has been warmly welcomed by Hong Kong and Macao citizens.

Later, under the personal care of Premier Zhou, in December of the same year, 753 express train departed from Shanghai and 755 express train from Zhengzhou. So far, the 751, 753, and 755 “Three Express Trains” system has been formally formed, striving to ensure the stability of fresh commodities supplied to Hong Kong and Macao, and has played an immeasurable role in ensuring the supply of Hong Kong and Macao markets.

Escort staff accompanied each train to tend to the livestock.

The most tiring and hardest is the escort who follows the car. They boarded the train from the departure station, and were tied to the fate of the escorted animals and aquatic products. Poultry and livestock should be fed and fed, and live fish should not be deprived of oxygen. No matter which job is not done in place, its survival rate will be affected.

The job was a dirty one, having to ride with the pigs! 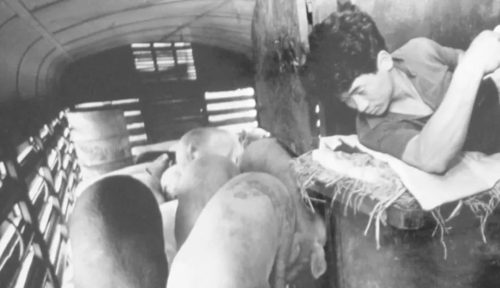 With plenty of work to be done en-route.

To keep the carriages ventilated at all times in summer, “even if people don’t take a bath, make sure to let the pigs take a bath.” In winter, pigs are easily crushed to death because they are afraid of the cold, so the escorts will chase the pigs regularly.

Whether in spring, summer, autumn or winter, sweep the faeces several times a day to prevent illness or slip and fall injuries, and strive to minimise the fatality rate.

Worried that the locomotive whistle would frighten the livestock, the escorts loaded the first few carriages with dry goods, and ensuring that the livestock was as close to the water pipe as possible at the supply station.

“The place where the pile of feed is about 3-4 square meters on the wagon is where we sleep, and we can’t straighten our legs.” “We don’t dare to eat in restaurants because of the smell of pig belts.” “Wash with shampoo.” Three times, the hair is still stiff, and the stench can’t be dissipated.

The Central Committee of the Chinese Communist Party putting great effort into the sourcing of livestock to be supplied to Hong Kong.

The foreign trade department goes all out to organise the supply of goods. As the saying goes, the beginning of everything is difficult.

Foreign trade departments all over the country have special personnel who go deep into towns and villages to acquire living species such as chickens, ducks, geese, fish, cattle, sheep and pigs. These were the necessities of life that were in short supply in those days, and it was not easy to organise the supply of goods. They did not know how many times they hurried and traveled every day to complete the acquisition plan.

Then, these lively poultry and livestock are gathered together and transported to each station on time, waiting for loading and delivery. There can be no mistakes in every link of the whole process, otherwise, you will have to take responsibility for failing to complete the task. The personnel of the foreign trade department have been working like a day for decades, and it is hard to tell how much effort and sweat they have put in to ensure the normal operation of the trains supplying fresh materials to Hong Kong.

After the reform and opening up, the infrastructure construction in various places has been greatly improved. In Henan alone, there are more than 100 modern pig farms in the eleven counties that supply live pigs to Hong Kong, and tens of thousands of high-quality live pigs are produced every year. It is continuously shipped to Hong Kong and has become a delicacy on the table of Hong Kong compatriots.

Yet the trains were still hauled by steam locomotives on a single track railway.

By the 1980s Changsha North Railway Station in Hunan Province on the Beijing–Guangzhou railway was the hub of the cross-border traffic, despatching 800,000 to 1.2 million tons of cargo a year. However by the late 1990s the market share by rail began to fall, thanks to the competition from trucks using China’s growing network of expressways. 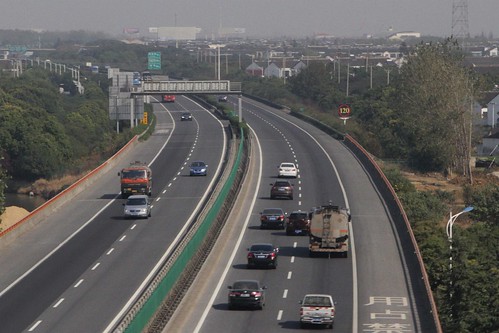 In 2000 the KCRC phased out their freight forwarding business to the mainland, with train 751 from Changsha East suspended in 2004 along with live pig traffic. The final cross-border freight service was train 755 from Zhengzhou North station, which ended operations in 2010.

Unloading the trains in Hong Kong

Initially livestock trains were unloaded at the freight yard at the original Mong Kok station, with livestock transported to two public slaughterhouses: Kennedy Town Slaughterhouse on Hong Kong Island and the Cheung Sha Wan Slaughterhouse in Kowloon, built in 1968 and 1969 respectively. They were joined in the early 1980s by three licensed private slaughterhouses, located at Tsuen Wan, Yuen Long and Tai Po. 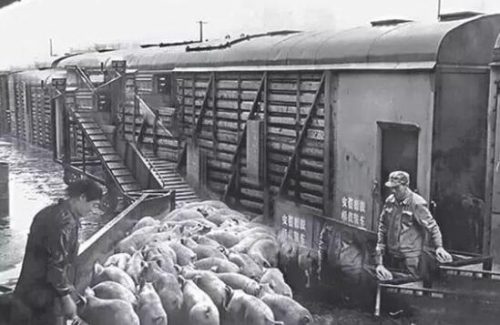 Growth in livestock traffic saw the traffic move to a dedicated livestock yard at Ho Man Tin in 1978. 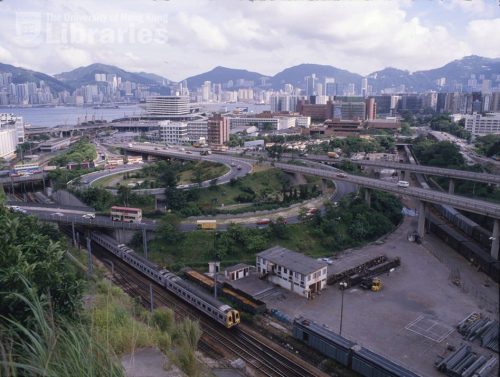 Operator of the livestock yard, Ng Fung Storage and Transportation, had this to say on the yard.

Between the Kowloon Mong Kok Station and the Hung Hom Railway Station, few people notice that there are two railway tracks that silently separate from the main line and extend to a secluded place. The intersection of Princess Road and Kangzhuang Road Elevated Road, where cars are constantly flowing, crosses from above. Below is the operation site of our Ng Fung Storage and Transportation – Ho Man Tin Animal Unloading Area, which is also the front line of our work.

It was learned from the old staff of the storage and transportation that as early as 1978, the mainland supplied the livestock from Hong Kong by train, and the unloading area was transferred from the original Mong Kok Railway Station to Ho Man Tin. When we first entered Ho Man Tin, there were no ready-made buildings, and the wooden house built by ourselves became our temporary “office building”. Not only did the workers operate in very poor conditions, it was also difficult to find a place to shelter from the wind and rain.

It is under such difficult conditions that live pigs and live cattle with six or seventy trains are divided into three shifts every day to enter the unloading yard, and our employees will pick them up and unload them on the car, and then they will be sent to five places in Hong Kong, Kowloon and the New Territories. It is sold in a slaughterhouse, slaughtered, and then put on the market. In order to ensure the normal operation of live sales, our employees have almost no rest days for three hundred and sixty-five days a year. In summer, with the scorching sun and the stormy season, it is common to work in the wind and rain.

But by the 1990s operation of slaughterhouses in urban Hong Kong was considered on the nose, so the Legislative Council approved a total of $1.925 billion to build a new slaughterhouse at Sheung Shui to replace those at Kennedy Town, Cheung Sha Wan and Yuen Long.

The construction of Sheung Shui Slaughterhouse started in February 1997 and was completed in June 1999.

The new complex was located beside the Kowloon Canton Railway, and provided with a dedicated rail siding and unloading platform, allowing the retirement of the Ho Man Tin yard.

As we bid farewell to the 20th century, with the completion of the Sheung Shui Slaughterhouse, we must also bid farewell to this place where we have worked for twenty-one years. Looking back, it seems like it was yesterday. In the past 21 years, time has passed, we have unloaded more than 33 million live pigs and more than 1.7 million live cattle here; in these 21 years, several generations of Ng Fung Storage and Transportation employees have worked hard and dedicated silently. When we left When I was here, all that was left was the low and dilapidated office building and the memories that will never be erased.

After the relocation of the Ho Man Tin unloading yard, the nearby areas and residents no longer have to suffer from the smell of livestock, sewage and pollution. But after moving to Sheung Shui Slaughterhouse, our employees are still doing the same job, the work is still as mundane. The employees of Ng Fung Storage and Transportation are still working and dedicating silently. The difference is that, at the same time, it begins to silently meet new challenges.

The first livestock trains used China Railways ‘J1’ and ‘J2’ livestock wagons, designed in 1963 for the long-distance transportation of live pigs, chickens and ducks, with a load of 15 tonnes. 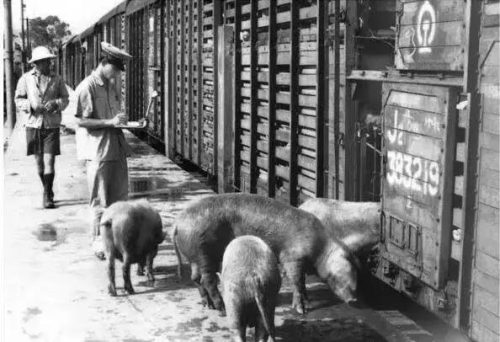 The two-tier wagon has ventilation and water supply equipment, with four 500L water tanks providing a total water storage capacity of 2000L. The later livestock wagons also featured a small staff compartment at one end, for the escort staff who tended to the animals during transport. 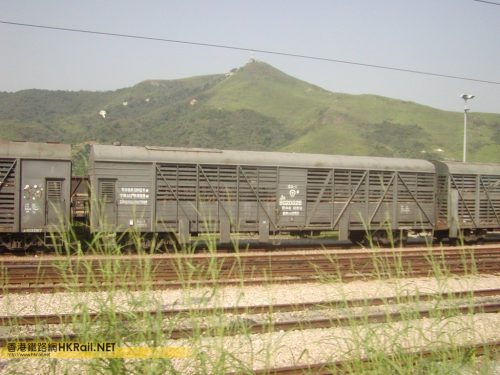 So they didn’t need to ride inside the wagons with the livestock!

First up, a few pieces in English.

Chinese language articles that are pretty much PRC propaganda:

A look at the trains from a railfan perspective, again Chinese language.

And finally, lots of photos of the KCRC diesel hauled trains, including the pig traffic.