Coupling new and old on the East Rail line

A few years ago I found a photo of an original KCR ‘Yellow Head’ EMU coupled up to a refurbished classmate, but here is a more modern example – coupling a Metro Cammell EMU up to a brand new Hyundai Rotem ‘R-Train’ set.

The uploader provides an explanation of why the two trains needed to be coupled.

Around 17:00 on October 13, 2021 the R train (D034-D036 formation) developed a fault at MTR Kowloon Tong Station, which was suspected to be a malfunction of the power supply, and was coupled to the following MLR train, and transferred to Mong Kok East station. 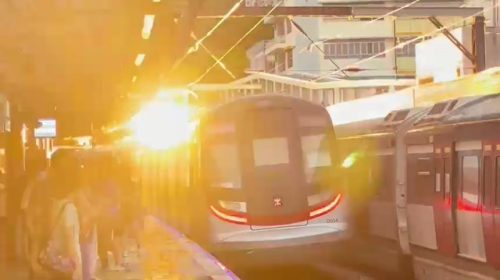 As well as the story behind the fault.

At around 5 pm today (13th), there was a train at Kowloon Tong Station on the MTR East Rail Line, and sparks exploded between the roof of the train and the overhead cables, and the sparks even scattered on the platform. “Hong Kong 01” obtained a short video of the scene taken by an eyewitness. Seeing the sudden explosion of sparks, many passengers on the platform were also shocked. The eyewitness said that the train had sparks popped out at least 3 times.

The MTR said that a train on the East Rail Line broke down near Kowloon Tong Station and affected the power supply system. minute. About 40 minutes later, the MTR announced that the train had been removed from the traffic lane, and the East Rail Line train services gradually returned to normal.

When the MTR responded to the inquiry at night, it stated that a preliminary inspection found that there was a tree branch on the pantograph of one of the trains involved, and it was initially suspected that the tree branch had come into contact with the overhead power unit and caused the accident. The train operation control centre will arrange for the train to return to the depot for detailed inspection and understand the cause of the failure.