The return of cross-boundary freight trains to Hong Kong

The COVID-19 pandemic has changed the world greatly in the past few years, and in March 2022 it saw the return of something gone for a decade – freight trains between Hong Kong and China. 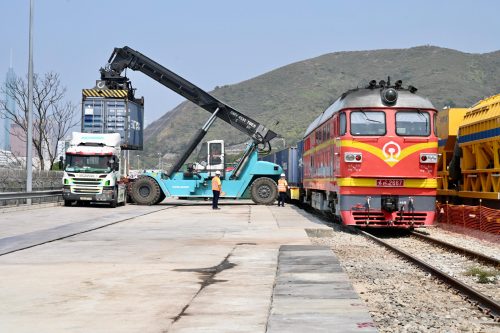 Freight trains once used the MTR East Rail line, transporting live pigs to the slaughterhouse, container trains, and bulk mail, but ended in 2010 due to a decline in usage.

However the COVID-19 pandemic saw freight transport disrupted between Hong Kong and China.

After the Spring Festival in 2022, Hong Kong was hit by the Omicron virus and ushered in an unprecedented fourth wave of the epidemic. Since Hong Kong and the mainland have not been able to clear customs, and Hong Kong people returning to the mainland have to go through a series of strict quarantines before they can use the mainland for their own activities, I thought that the Hong Kong epidemic was limited to the area south of the Shenzhen-Hong Kong border, but the surface Under the calm, there is an undercurrent surging.

At the same time, cross-border logistics truck passages that have been transporting materials to Hong Kong for a long time have also seen cross-border drivers disqualified for failing to work in accordance with epidemic prevention regulations, and more and more drivers were diagnosed and unable to return to work in the mainland. The cargo volume of the land and port plummeted, causing the prices of vegetables, meat and other food in Hong Kong to soar.

A barbed wire fence was erected on the Luohu Bridge in February 2022, for fear that someone would try to sneak between Hong Kong and China via the railway tracks. 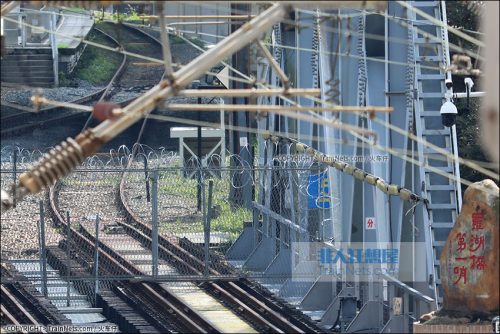 “Hong Kong used to have three express trains a day to supply fresh food to Hong Kong. The facilities still exist. It may not be necessary to use the intercity train to deliver the goods to the city center, but the Sheung Shui Slaughterhouse actually still has a railway connection. Through this railway, it only takes 10 minutes to reach Sheung Shui. If the government has the courage to coordinate, it can discuss with Ng Fung Hong whether this place is suitable for their use, or study whether some places can be lent to ensure the supply of some food. Although it is temporarily unusable for vegetables, it is still needed for live pigs. If one of the more than 10 pig truck drivers is infected and may even stop for a while, can the authorities start some research at this moment to make use of the old railway between Sheung Shui and Qingshui River, and Let the central government coordinate and transport the pigs in this way?”

And it appears the wheels started turning, as a week later, the decision was made to implement a cross-border freight service.

First a freight terminal at each end had to be arranged for the new rail service.

With the rapid development of Shenzhen, Sungang Station, which used to be responsible for operating the “three express trains”, has long been transformed into a modern depot, and the disinfection and quarantine facilities in the past have long since ceased to exist.

Therefore, Shenzhen decided to load the goods at the Pinghu Hunan National Logistics Hub built for container trains. There are supporting container transshipment equipment here, which can fully undertake this important task.

As for the MTR, the Luohu Marshalling Station next to the Luohu Station of the East Rail Line was also selected. This is also the place where the “Metro Cammell EMU” was dismantled recently.

And rolling stock had to be sourced.

The initial plan discussed with the MTR was to use DF11 diesel locomotives for traction, but later, Guangzhou Railway considered the existing use of locomotives. For example, the DF11 locomotives of Guangzhou Railway will also undertake the hot backup rescue work of various high-speed railway lines in the management, so the DF4B passenger locomotive was finally selected, which is what we call “orange”. It was more than 20 years ago that the DF4B passenger locomotive entered the port.

The train consist was chosen to suit the available sidings.

In the morning, the Hong Kong Transport and Housing Bureau, the MTR and the freight industry conducted a test at the Lo Wu Marshalling Yard. Using a ER20 diesel locomotive and rail cars produced by Dalian Plant to simulate combined trains, and at the same time conduct container lifting and unloading tests in railway freight yards.

And on 1 March an empty train made a trial run across the border.

On that day, the empty train went to Hong Kong for the test. The test train originally scheduled for 9 o’clock in the morning “missed the appointment” again.

Until the afternoon, the Propaganda Department of the Central Committee of the Communist Party of China arrived at the Pinghu Hunan Freight Yard with many central media, and filmed the preparation and departure of the empty truck that day.

After entering Hong Kong, the test train cooperated with the MTR, connected with the ER20 locomotive, and carried out related tests such as braking. 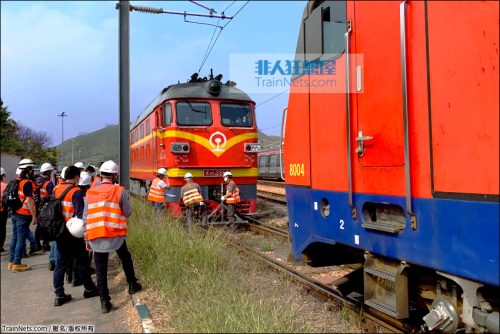 And the service begins 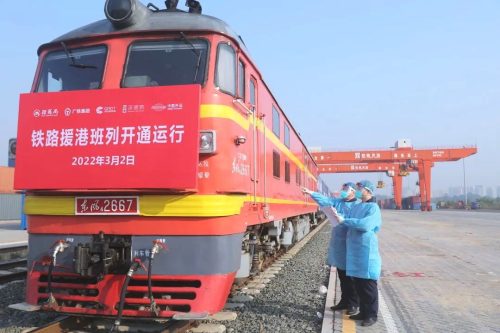 Crossing the border at Lo Wu soon after.

And arriving into the marshalling yard on the Hong Kong side.

Stopped in the sidings. 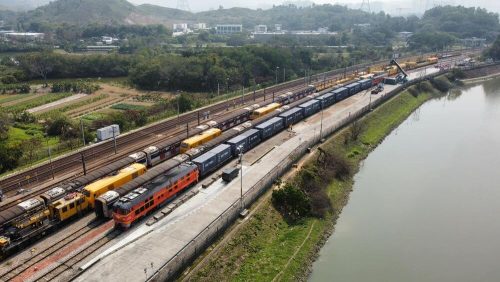 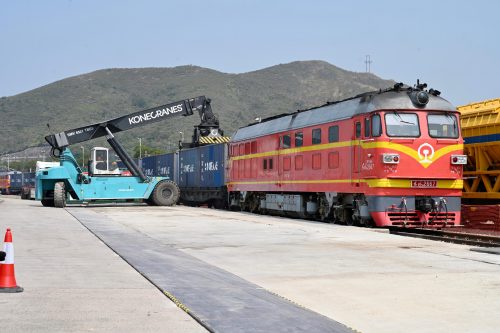 While the politicians posed for a photo opportunity. 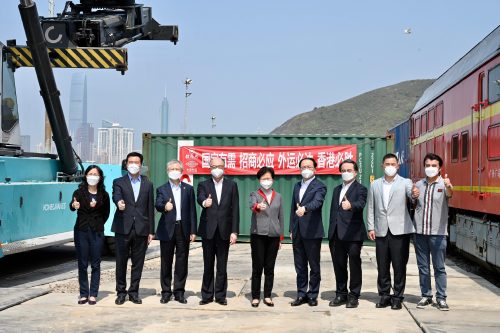 ​The railway transportation of goods from the Mainland to Hong Kong commenced today (March 2), with the first train carrying about 50 tonnes of anti-epidemic supplies arriving at Hong Kong this morning.

​The Chief Executive, Mrs Carrie Lam, and the Secretary for Transport and Housing, Mr Frank Chan Fan, together with the Director General of the Youth Department of the Liaison Office of the Central People’s Government in the Hong Kong Special Administrative Region, Mr Zhang Zhihua; the Chief Executive Officer of the MTR Corporation Limited (MTRCL), Dr Jacob Kam; and the Assistant President of the China Merchants Group Limited, Mr Chu Zongsheng, and others, welcomed the first train transporting goods from the Mainland to Hong Kong at the MTR Lo Wu Marshalling and Railway Freight Yard.

The first cross-boundary cargo train carried nine freight wagons, with 18 containers of anti-epidemic supplies, including COVID-19 rapid antigen test kits, protective clothing, etc. The goods were transported from the Pinghu South Railway Freight Yard in Shenzhen to the Lo Wu Railway Freight Yard in Hong Kong, with a journey of about 40 minutes. There will be one cross-boundary train trip per day at the early stage of the operation. Subject to the demand and handling capacity of the freight yard, train operation will be enhanced progressively.

​Once again, the Hong Kong Special Administrative Region (HKSAR) Government expresses gratitude to the Central Government, the Guangdong Provincial Government and the Shenzhen Municipal People’s Government for their staunch support all along. Together, the HKSAR Government and the Mainland authorities have explored and implemented various measures to ensure stable goods supply from the Mainland to Hong Kong. The HKSAR Government also particularly thanks the China State Railway Group Co., Ltd, the China Railway Guangzhou Group Company Limited, the MTRCL and the trade for their active support and facilitation, as well as the effort of various government departments, which have facilitated the launch of the cross-boundary cargo train within a short period of time.

​The HKSAR Government will monitor the situation closely, and continue to work closely with the Mainland authorities, in order to facilitate and implement various measures to ensure a stable goods supply to Hong Kong as well as to optimise the operation of cross-boundary transportation of supplies.

A total of three return trains were timetabled for the cross-border service, but only one train per day initially ran. From 9 March 2022 the frequency was increased to twice a day, but following a coronavirus wave in Shenzhen from March 18, 2022 the service was dropped back to once a day.

It’s a little bit lost in translation, but a convoluted procedure has been established to quarantine the staff operating the cross-border rail service.

According to the “China Railway” micro-signal introduction, the Guangzhou Bureau Group Corporation implements closed-loop management of the drivers of the Central Railway’s aid to Hong Kong trains, requiring them to implement centralized management and health monitoring after returning from Hong Kong.

After the health monitoring is over, the nucleic acid test results are all negative before the cross-port transportation task can be continued. After the train driver arrives in Hong Kong, the activity area will be defined as the “two points and one line” between the train and the rest area.

The railway department has also strengthened the management of epidemic prevention and control, and set up “red and green zones” in railway freight yards in accordance with the requirements of epidemic prevention and control. The “red zone” is the unloading area of ​​inbound goods, customs inspection, container and cargo disinfection; the “green zone” is the loading area of ​​inbound goods after disinfection and the loading of mainland supplies to Hong Kong. Set “soft isolation” between “red zone” and “green zone”.

In accordance with the principle of “one train, one operation, one disinfection”, the railway freight yard carries out disinfection in the whole process. A disinfection work ledger is established for all goods, and the disinfection situation is recorded in detail to ensure the safety of materials.

But an even more bizarre procedure is sending out railway staff to disinfect the railway tracks after the train passed over them.

I wonder what infection risk that was intended to address.